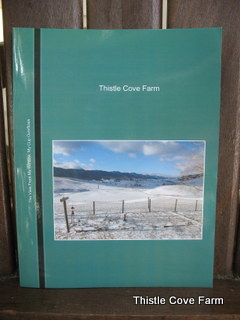 OH MY! A few years ago, I blogged about turning your blog into a book but then promptly forgot about it. Until last week when I sat down and went through the process to take the first three years of my on-line journal and turn it into a hard copy. It’s difficult to see but the writing on the left side says, “The View From My Window, My Cup Overflows” which is the by-line for my blog. The company I chose is called Blog2Print and I’m Very Satisfied with the final product as are some other folks to whom I’ve showed my TCF blog book. The view above, as you can see, is the winter photo header. 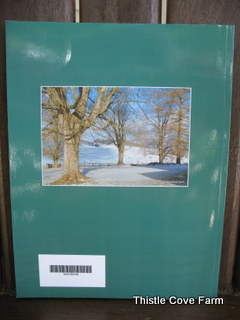 The back cover is also a winter photo; for some reason, unknown to me -smile-, I chose winter photos. The next blog book I’ll use summer photos. The glossy paper means the photos have been reproduced beautifully!

I started my blog in May 2005 and the first posts didn’t have photos because the my learning curve was steep! Eventually, I got the hang of it and photos began appearing. 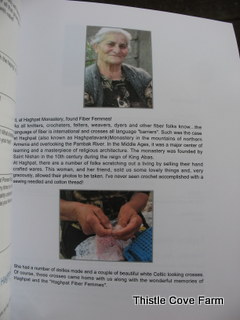 Dave and I met this lovely woman in Armenia at the Haghpat Monastery. Dave and I were traveling with a delegation partially funded by the US State Department and ourselves. It was a fabulous trip; if you’re interested, I’ll blog about it at a later date. One quick story…prior to meeting the women at Haghpat Monastery, Dave and I were traveling in Georgia. We were separated from the rest of the group (which seems to be a recurring theme in our travels!) and spent five Very L.O.N.G. hours with some former, or so we were told later, Russian Mafia who were recruited from the Russian KGB. Those Very Large gentlemen…or as I referred to them, “those no-neck ABC guys” thought Dave and I were in Gori, Georgia to export Georgian wine to the USA.

Frankly, there’s only so much one can say when one doesn’t speak the language! After a while, the smiles on our faces felt frozen and still we would smile and nod politely. After five hours, the rest of our group arrived and we all spent the next six hours eating, drinking, drinking, drinking, eating and drinking. At least, the Russians and Georgians drank…and drank…and drank…I’ve never seen frat boys who could hold a candle!

Just two years after Dave and I came home from our Georgian and Armenian travels, Russia rolled troops into Gori, killing citizens and destroying the city. It’s still unbelievable and a total nightmare! 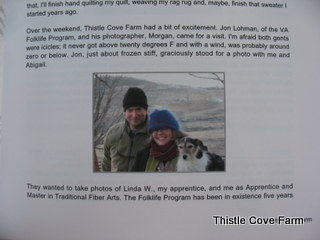 Happy days include Jon Lohman, and a photographer, of the Virginia Folklife Program coming to the farm and doing a story on the sheep and I. The VFP has a Master Apprentice Program wherein they link a Master and an Apprentice in various areas of art. I was chosen as the first Master Fiber Artist and Linda W., was my apprentice. I was, and am, thrilled to the moon and beyond to have been published in the VFP’s book In Good Keeping. What an honour; thank you, Jon! 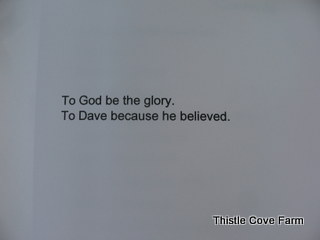 The dedication page to the Thistle Cove Farm blog book. As always, thanks and glory be to God because He makes all things possible. And Dave? Dave always believed in me; would that every woman had such a man, a David, in her life, to fight her Goliath’s. Dave would always tell me, “it’s my job to protect and provide for you” and I’d reply, “and, it’s my job to take care of you.” I love you, Dave.