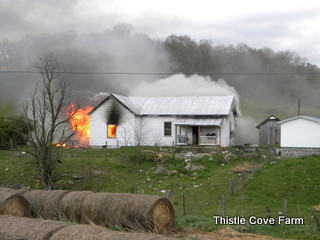 UPDATE:
Boy – size 6 pants and shirt, size 2 shoes and lost all his toys, he walked out barefoot
Adult female – 2X shirt, 38 pants, size 9.5 shoes
Adult female – medium shirt, 34 pants, size 8.5 shoes
Adult male – XL shirt, 30/32 pants, size 10.5 shoes
If you want my street address, send me a PM and thank you. The family is staying in a hotel while they look for a new home.
Regarding donations…if you want to send a check,make it out to my name so I can cash it and give it to the family. The money I’ve collected was going to be spent on clothing, household goods, etc. but I think they need the cash for rent and utilities in order to get started again. People are being so kind and donating furniture, clothing, etc. but they need rent money too. Hopefully, tomorrow I’ll meet with the adult daughter and find out more information.

Last night,just before 5:00 I opened the back door for the dogs to go outside and, as usual, I always step onto the porch and sweep the valley…just in case. Last night, I noticed black smoke rolling from behind the nearest neighbor’s house. That neighbor lives about 1/2 mile away and, at first, I thought he might be burning brush. But the smoke was black and brush smoke is white. I grabbed the telephone and called Daniel, our Fire Chief and left a message on  his voice mail. Understand now, the house wasn’t on fire as in the above photo…it was simply black smoke pouring from the far side and difficult to see. I walked on down the driveway, binocs in one hand, phone in the other and my unrest rising quickly and considerably. I told Daniel’s machine, “I might be crazy but I think Russell’s house is on fire” and hung up quickly. 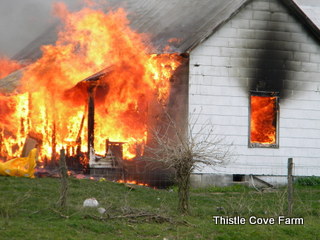 Then, I called another neighbor and as soon as he answered the phone I said, “Russell’s house is on fire!” and hung up so I could call 911. I dialed 911, told them Russell’s house was on fire and the woman knew, almost immediately, where the house was located. It took only one sentence to make it completely clear. I gave her my name and said, “not all our firefighter’s have pagers, I have to make other calls!” then started calling other firefighters and leaving messages for them. 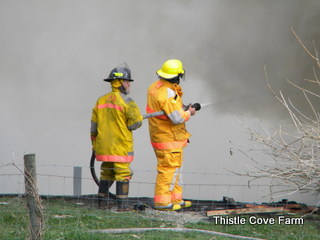 ~ the thick of it ~
The water hoses are heavy and tend to fight and snarl; it takes two men to direct the spray of the heaviest hose. The Cove Volunteer Fire Department responded within fifteen minutes (perhaps less) which is pretty excellent when you consider we’re all volunteers and most men were still at work somewhere in the pastures or on the mountains.

When I arrived, I took photos from the road where I also assisted Morgan and Ashley with directing traffic. I let two cars go by before it dawned on me…DONATIONS! So, every vehicle that passed, I would flag them down and say, “the people and animals got out alive but they lost everything; please donate.” Most people did and some folks, from a neighboring fire station, stayed to help. Eventually, Thompson Valley Volunteer Fire Department was called in and they brought two more trucks plus a pick-up outfitted with specialized gear. 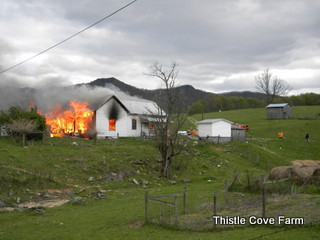 Believe it or not, not all of the Cove firefighters have gear so I’m in process of writing a local grant, asking begging for money to buy gear for all our firefighters. Some of the men were even sharing gloves! 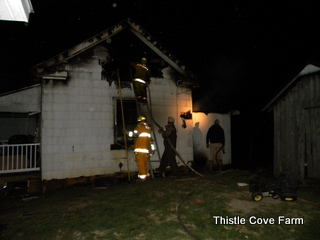 They fought the fire from around 5:15 until after 9:00 and were called out again at 10:30 and stayed until around 1:00. I had just collapsed onto my pillow when my telephone rang and Ashley said, “they just got called out again. Can you go and put another set of lights on the house?” So, I got the pick-up truck because it’s higher off the ground and headed down the road. As it turns out, the fire was now, mostly, at the back of the house and I couldn’t get into position to be of any help. 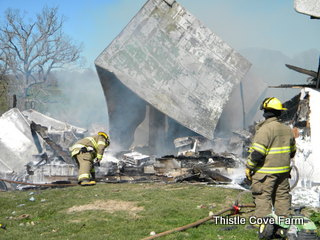 This afternoon, around 3:00, it was still burning and firefighters were still dousing it with chemicals and water. It’s now almost 8 p.m., more than twenty-four hours later and it still smolders!
The family spent the night in a hotel last night and are re-grouping while people from all over the County are rallying to help with donations…money, clothing, furniture, etc. 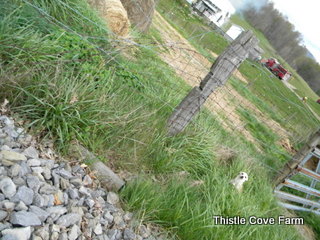 Not the greatest photo but do you see the wee face in the lower left right hand corner? I don’t know her name but she’s asleep at my feet and I’ll keep her until the family is back on their feet. She’s a sweet little thing and is holding her own with the pack already living at Thistle Cove Farm and that’s saying a lot for her big heart!
HURRAH for the Cove Volunteer Fire Department, for the gentleman who stopped to donate money and stayed to help fight the fire, to the Thompson Valley Volunteer Fire Department, to folks who donated money, to folks who helped with traffic, gave water and everyone who held out…is holding out…a helping hand. I have to tell you though, Hillary was wrong. It doesn’t take a village, it takes a community and I live in the Very Best!

Tomorrow, I’ll update the Cove Community blog and put up different photos. It’s absolutely amazing what volunteers do and, for the most part, are totally unsung heroes. Please, include Russell’s family and our grant application in your prayers; our CVFD NEEDS equipment!
P. S. Thank you all for your kind birthday wishes; it’s one I’ll never forget!
Blessings ~ CVFD ~ TVVFD ~ volunteers ~ folks with big hearts ~ Russell and family, they got out alive ~
Share
Pin
Email
« Happy Birthday
Sabbath Keeping »