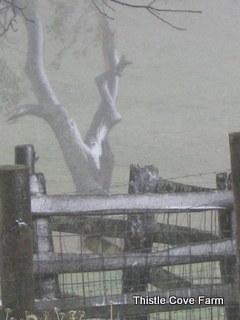 In the past, I’ve written about Blackberry Winter in 2005, 2008 and 2011. There are probably a few other posts but these three give you an idea; it was also a trip down memory lane for me…a happy trip, let me add. For those who might not know, Blackberry Winter is the reverse of Indian Summer. It’s that time in Spring that we’ve had a warm/hot spell and the blackberry bushes are in bloom. Then, WHAM! Ole Man Winter comes for a visit and we’re slammed with winter…but today it’s not just Blackberry Winter, it’s Blackberry Blizzard! 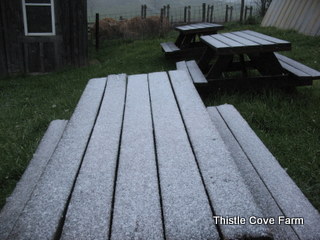 We’re having high winds, sleet mixed with snow, low visibility and the horses and calves are not happy. Can’t say as I blame them; I’m not all that thrilled myself. I’ve had terrible cabin fever and was going to Abingdon today to meet Chris. We were going to go to the bookstore, do a little shopping, eat lunch and, generally, catch up with each other but not now. Dave and I always made the agreement to not travel dangerous roads. When the weather was terrible, unless it was a have to case, we always stayed home. There are folks who have to go to their job and Dave and I didn’t want to add to the mix. Tractors are holding steady to the road but I can hear pick-up trucks slipping and sliding all over the place. Yep, made the right decision to stay at home! 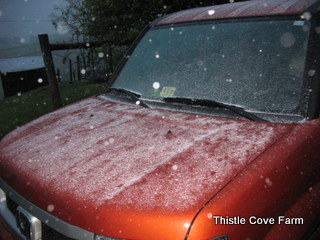 I was at the barn at 6:30, throwing out hay to the horses and feeding barn cats. One of the horses was shivering, not a good sign, as horses generate heat from the belly out. They needed food and quickly! So, I gave them a double portion of hay which should tide them until this afternoon when I give out more hay. The barn cats, used to me showing up an hour later, weren’t in evidence but the food was put out for them anyway. So, my day is now going to be spent doing a bit of estate paperwork, cleaning and making something to eat for myself. 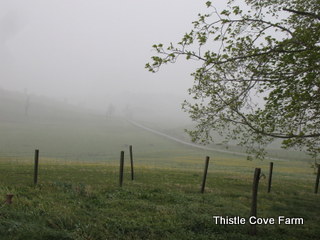 When Dave was alive, we gloried in food prep and eating and would spend quite some time thinking about food, buying food, preparing food and then sharing meals. Not so much anymore. It’s such a drag, all the above and, the truth hurts here, I don’t really care. In the morning, I’ll make a two country egg spinach cheese omelet, sometimes with home made sausage or bacon, sometimes with bread and that will hold me until yogurt for supper. Those of you who live alone or have spouses who work away, what do you do? Do you fix full meals? How do you feed yourself?

How’s the weather where you’re living? Blackberry Winter, Blackberry Blizzard or Spring? Whatever; it’s good to be above ground!