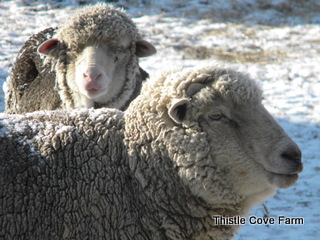 There’s an old saying, “no rest for the righteous and the weary don’t need none”. Ain’t it the truth! Oh, and by the way, the word ain’t was in popular usage as late as the 1960’s and considered correct use of the language. Also, the word et for eat. I know language evolves and changes but, frankly, I don’t think in a good way when words like gay no longer means happy or booty no longer means spoils of war. And, since I’m on an rant, did you know the word booty is used in the Old Testament? Yep, meaning spoils of war and not a fat girls backside. Oh, is that un-PC? sorreeeee….my bad. 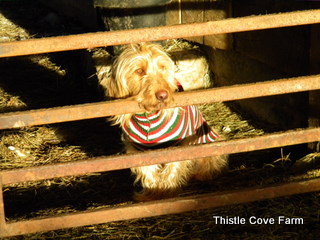 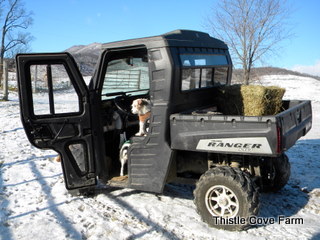 ~ Ranger, my hero ~
Polaris makes a UTV, Utility Terrain Vehicle, that is a powerhouse; I’m not sure I could do what I do if I didn’t have the Ranger. Dave bought it for me a few years back and it’s made farm chores so much easier, safer and warmer. Although, when four dogs and I are crammed inside, the going is slower than usual. At the touch of a button, the bed lifts and dumps the contents to the ground while the heater, once warm, will make me open windows. There’s a windshield wiper and each wheel has independent suspension…whooohooo! My Ranger, it’s the Bomb! 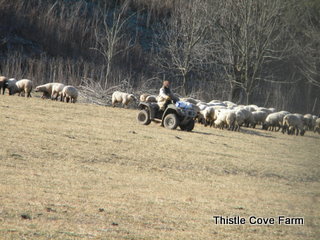 Clinton, my neighbor, feeding his sheep. I think it’s odd that Thistle Cove Farm still has so much snow but neighboring farms are bare and barren again. That should change as we’re to get a couple more inches of snow tonight but Monday, the temps are supposed to be in the 50’s which means boot sucking mud…again. sigh. 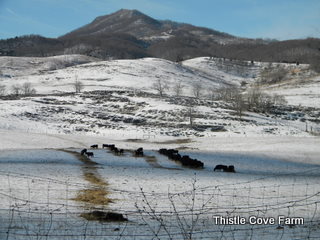 To feed cattle the men unroll a round bale of hay; the cattle line up, either side, and eat until it’s gone or their calves take a snooze on what’s left. The hay makes a soft, warm bed that’s Very Attractive to the youngins. 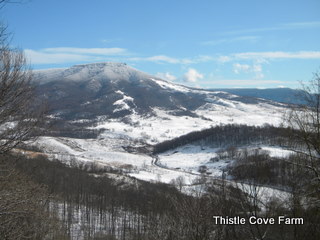 ~ don’t hate me because I live in a beautiful place ~
I didn’t make it to WalMart yesterday but went this morning, after chores. In between snow storms today, we did have some clear skies and Morris Knob is viewed from a different direction. 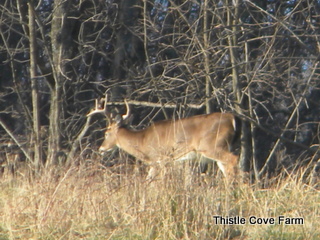 This fine buck was camera shy but I managed to get a photo or two of he and his family. I’m not sure but he could be at least a ten-pointer, perhaps 12; certainly he’s beautiful and I hope he makes it to a ripe old age. Hear that, Daniel?! 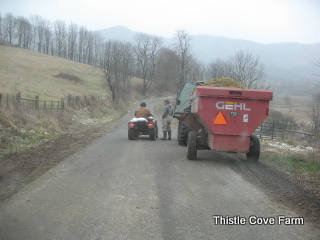 ~ John and Daniel, taking a meeting ~
One of my favorite things about living in a rural area is our version of taking a meeting. All of which means, when you see a neighbor, you stop and chat…the weather, feeding, cattle, dogs, children, spouses, neighbors…the usual stuff everyone talks about. It’s just our board room is the great outdoors -smile-. 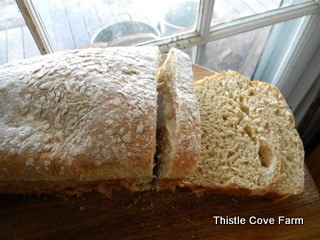 Perhaps I should have started with this photo. I made bread yesterday, a couple of soft oatmeal loaves that are delicious toasted and slathered with butter and my home made jam or my brother’s honey. A neighbor has an uncle who keeps a milk cow and he’s promised to get me a couple of gallons of milk. In return, I’ve promised to churn for butter and buttermilk and will share and, of course, I’ll put a loaf of home made bread in the poke as well.
So, that’s my usual Saturday; any day, really that’s not Sunday or I have to go to town. Feeding my animals takes a while, especially with all the good helpers I’ve got, especially with all the picture taking I do, especially with all the rubber necking I enjoy. God has blessed me so much; my daily prayer is, “Please, God, give me the strength to do what You have set before me.”  He never disappoints.