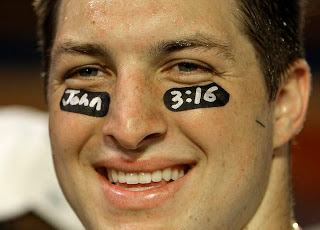 ~ Tim Tebow, photographer unknown to me ~

As some may know, I am not a sports fan and don’t pay attention to sports. Probably, I should be ashamed to admit I had no clue who Tim is but folks have, somewhat graciously, put me on the right road -smile-. I am however, always in the corner of another Christian who takes a stand; there aren’t enough, wouldn’t you agree?


The following story is gripping, real and totally wonderful; it came to me over the signature of Dr. Gerald B. (Jerry) Kieschnick, President Emeritus, The Lutheran Church-Missouri Synod, Presidential Ambassador for Mission Advancement, Concordia University Texas.


“In a recent email, I read about a woman named Pam, who knows the pain of considering abortion. More than 24 years ago, she and her husband Bob were serving as missionaries to the Philippines and praying for a fifth child. Pam contracted amoebic dysentery, an infection of the intestine caused by a parasite found in contaminated food or drink. She went into a coma and was treated with strong antibiotics before they discovered she was pregnant.


Doctors urged her to abort the baby for her own safety and told her that the medicines had caused irreversible damage to her baby. She refused the abortion and cited her Christian faith as the reason for her hope that her son would be born without the devastating disabilities physicians predicted. Pam said the doctors didn’t think of it as a life, they thought of it as a mass of fetal tissue.

While pregnant, Pam nearly lost their baby four times but refused to consider abortion. She recalled making a pledge to God with her husband: If you will give us a son, we’ll name him Timothy and we’ll make him a preacher.

Pam ultimately spent the last two months of her pregnancy in bed and eventually gave birth to a healthy baby boy August 14, 1987. Pam’s youngest son is indeed a preacher. He preaches in prisons, makes hospital visits, and serves with his father’s ministry in the Philippines. He also plays football. Pam’s son is Tim Tebow.

The University of Florida’s star quarterback became the first sophomore in history to win college football’s highest award, the Heisman Trophy. His current role as quarterback of the Denver Broncos has provided an incredible platform for Christian witness. As a result, he is being called The Mile-High Messiah.

Tim’s notoriety and the family’s inspiring story have given Pam numerous opportunities to speak on behalf of women’s centers across the country. Pam Tebow believes that every little baby you save matters. I pray her tribe will increase!

May the peace of our Lord Jesus Christ be with you always!”


“You ever feel like there’s too much Tim Tebow news? Neither do I. Here’s a roundup of some of the most interesting Timbits from the aftermath of the Denver Broncos 29-23 overtime victory over the Pittsburgh Steelers.

• The fact that Tebow had 316 yards passing and averaged 31.6 yards per pass in the game didn’t escape notice on Sunday night. Tebow wore “John 3:16” on his eye black in the 2009 BCS Championship game and has since become identified with the famous Bible message. The coincidental stats caused millions of fans to perform Google searches on the Bible passage in the past 24 hours. Here’s one more unbelievable stat: John Ourand of Sports Business Journal reports that the final quarter-hour television rating for the Broncos-Steelers game was, you guessed it, 31.6.

(John 3:16 reads: “For God so loved the world that he gave his one and only Son, that whoever believes in him shall not perish but have eternal life.”)”


Blessings ~ Mr and Mrs. Tebow ~ Tim Tebow ~ a gracious and merciful God who has forgiven me, and will forgive you, for all sins, including abortion ~