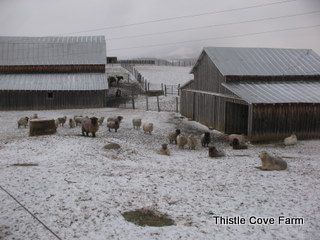 We’re having Ole Man Winter visit the farm today; wind chills are around zero, temps are around 10 above F and the sun is playing hide and seek…mainly hide. We’ve been to the barn to count noses, feed animals, check water and now it’s after lunch, time to do…well, what needs to be done is yet more paperwork dealing with Dave’s death. However, I am so weary of paperwork; ‘deed, what I’d really like is to run away from home if only for a night or two. Just to get a different perspective, to blow the cobwebs out, to have a meal food that’s more than a handful of nuts or jellybeans or, for breakfast, Grapenuts cereal. It seems I can’t get away from nuts -smile-. 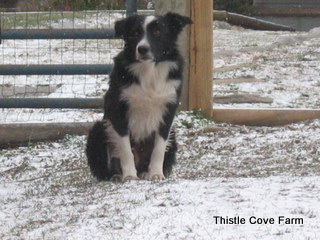 It takes me a while to get everyone ready for the barn trek. The dogs all have sweaters and I have layers; by the time I get their sweaters on them, I’ve worked up a sweat, both from the exertion and from continually saying, “Stand still; wait a minute, stop that, move please!” Everyone is excited, they know what’s coming and it makes them happy. All that is, save Jake, my Prodigal Son Border Collie, who is too dogly to wear a sweater. I think. At least, I’ve never tried putting a sweater on him. Jake has been coming here for around a year a while, can’t really remember, and now that it’s harsh winter, Jakes sleeps inside but still deigns to go to the barn for chores. He needs to keep an eye on the sheep and horses, you see. Jake is a Rambling Man and as a matter of fact, he and the Blue Heeler bitch on the farm behind us, just had a litter of puppies. As soon as I’m able to get off the farm, I’m going to buy a huge bag of dog food to contribute to their table. The folks who own the proud Mom hardly have two pennies to rub together so a bag of dog food will help Mom and puppies alike. BTW, anyone want a beautiful working dog? Those puppies are likely to have more brains than you and I put together and as both parents are beautiful, the puppies are button cute as well. Photos asap.
I’d ask Dave, “want me to take Jake to the animal shelter?” and Dave would always say, “no, but dadgummit! I hate having a dog that’s smarter than me!” Jake comes and goes, as he wills and as always, and we’re growing accustomed to each other’s ways. 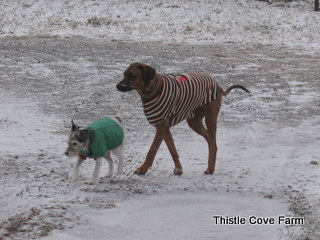 ~ Abigail Von Rotten the Terrier and Sadie Hawkins ~
Abbie has been here since May 1997 but only God knows her beginnings or her age but we do know she’s a rough coat Jack Russell. She was an adult when we found her and, even though aged, she’s still got a heart the size of Montana. Her eyes are dimmed, her hearing almost gone and she requires two sweaters when the weather is harsh yet she refuses to stay behind. I know the feeling; I’d rather die with my boots on than watching television and, God willing, when it’s my time, I’ll go with my boots on, doing what I love, chores on this farm.
Sadie, aka Sada Hawkins, is from Keniba Ridgebacks and almost three; she’s the only one we actually know their birth date. She’s still puppyish and that’s because I’ve allowed her to grow at her own pace and rate. Sadie, as are all Ridgebacks, is a chow hound and a counter surfer; if it’s food, it’s not safe. I cannot begin to tell you how many pounds of butter and bacon, glasses of milk, roasts, mashed potatoes, etc. she’s consumed over the years. If it’s not in the oven or placed high, it’s not safe; she’ll eat it. I know for a fact she burnt her tongue when she ate shortbread right from the hot pan! I was sure the shortbread was safe as it sat cooling for ten minutes but nope; Sadie said, “gosh it was hot but good!” Bad girl but it was my fault so no, she wasn’t punished beyond my yelling…at lot and loudly. By the by, Keniba has a litter of puppies in February and if you’re able to get on their buy list, more hurrah for you. Edith, Keniba’s breeder, has Excellent Quality Ridges and I unreservedly recommend her. Yes, you can get less expensive Ridgebacks but as Dave always said, “Pay now or pay later, probably triple.” It’s always much better to put your money on the table in the beginning and get a quality companion animal, one who is deemed free of disease and health problems. Later on, it’s not only financially expensive but it’s heart breaking to deal with a friend who is sickly and in poor health so don’t do it; buy quality and save yourself heartbreak. But, please, please…someone head slap me…I CAN NOT GET ANOTHER DOG…either a Ridge or one of Jake’s puppies. Please help me say “NO”!
Dave used to tell me the Drudge Report would, eventually, say, “Cove couple has 57 dogs!” I’d look at him and reply, “you say that like it’s a bad thing!” 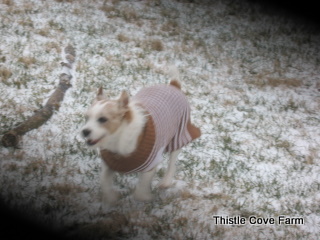 ~ Sophie Lauren Butterball ~
My little fat girl still hasn’t lost weight but that’s not her fault. Her dang human, me, gives treats in the morning and feeds at night. I have cut back on the treats so, maybe, she’ll start losing a pound or four. Sophie came here the week after Dave was buried; her human Pa had cancer and died leaving her human Ma in dire straits.  Dave and I’d discussed bringing Sophie to live with us and just because Dave died, I saw no reason to reverse my offer. Soph is a broken coat brown and white Jack Russell and thinks she owns the place; between she and Abbie, they’re probably right. 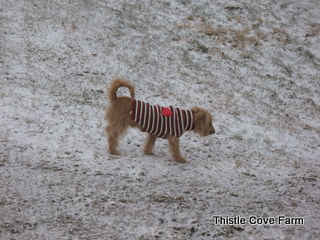 ~ Sam P. Spade, Secret Agent ~
Sam still hasn’t told us what the P. stands for but that’s okay; a man of mystery is always welcome. One first Sunday in June, while on the way to church, Dave and I found Sam. He was just a little thing and had, probably, been thrown out with his litter. He was the only one we found so we turned around, brought him home and put him in the kennel with fresh water and food. sigh. Dave and I being humans, are slow so it took us two weeks to get it through out thick skulls Sam was meant to live here, on the farm, and we would be his humans. It’s been a good arrangement and all are happy with this little Basket Hound, aka Basset Hound, Spaniel, Terrier mix. 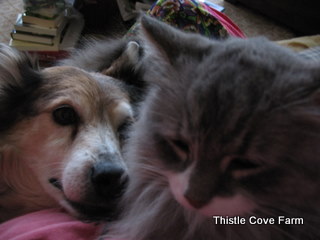 ~ Grandma Grace and Miss Kitty ~
Gracie is the oldest dog, we’re guessing around seventeen but, again, only God knows. She was wandering around on the side of the road when she was, easily, persuaded to live on the farm. Her bones are old, she’s slow and dim of sight but is yet able to dance for a treat. Grace is an Australian Shepherd Corgi mix and loves to herd me. If I’m not moving quickly enough or in the “right” direction, Grace will take a little nip at my heels to hurry me along. Alas, Miss Kitty has gone on before and she and Dave are saving me a place.
I’ve not even gone into detail on the rescued horse or sheep; that’s for another entry. I do know I need to get to the grocery store, if I’m going; there’s sure to be black ice on the road so I need to go and come during daylight hours.
So, tell me…who have you rescued lately? Who owes their life to your being willing to extend a hand?

Blessings ~ Abigail ~ Grace ~ Sadie ~ Sam ~ Jake ~ Sophie ~ and all those gone before and to come after, God bless us, everyone! ~
Share
Pin
Email
« A Howling Wilderness
A Usual Snowy Saturday in January »