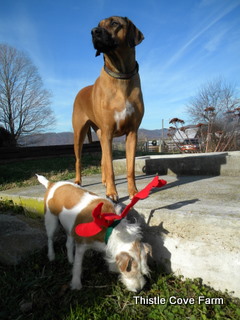 For some reason, this photo makes me think of Superman. Remember? He’d stand, arms crossed, as he gazed in the far distance. I tried putting antlers on the dogs…Christmas, doncha know?…and they rebelled. Sadie would run between my legs…I think in embarrassment…and Sam would just shake his head like, “you’re taking this just a little too far, Mom.” Somehow, he didn’t seem to buy the disguise suggestion. 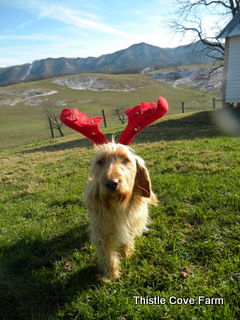 ~ Sam P. Spade, Secret Agent ~
It was crisp today but warm enough to get outside and get some work done. 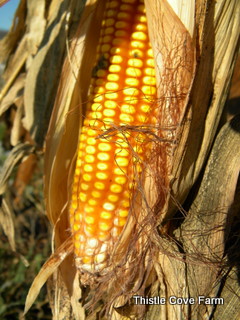 The garden still has corn which is given to the horses; such a treat for them! 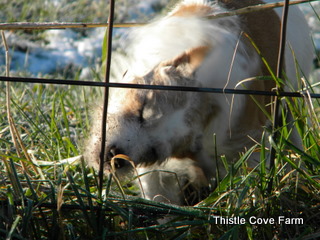 Not the best photo of Sophie but she was shaking her head to rid herself of dirt. Sophie, Sam and Abbie spent a couple of hours today digging out mice…Good Dogs…Very Good Dogs! Sadie, of course, supervised as she doesn’t like getting wet or cold feet. 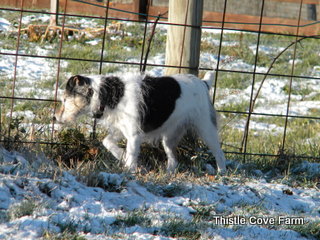 ~ Abigail Von Rotten The Terror ~
Abbie has old bones; Dave and I found her back in May 1997 and she was an adult when we found her. She’s been my heartbeat all these years; where you’d see me, you’d see Abigail and vice versa. She still has a great heart but her body is slowing down and she’s all but deaf with vision problems but her nose is still as good as ever. Please God, don’t take her too very soon…please.

Today was, just about, an ordinary day. What a blessing and a gift! Yes, I spent a lot of time wrestling with various folks trying to get yet more paperwork accomplished regarding Dave’s death. I think I’m making headway but, tell me something…is it just me or would you get riled when someone said, “I’m sorry for your loss. Your husband owned money on his credit card and we can take that money out of your checking account Right Now and it won’t cost you anything.”

Well. Duh. What a surprise. It won’t cost me anything, eh? Do I look like one of those ejit ninja turtles? I think not. I told the woman I had to go to town, re-arrange some money and would send her a check later today. She said, “in that case, we’re going to have to start searching for his estate so we can attach the estate.” I said, “What part of I CALLED YOU don’t you understand? I’m perfectly willing to pay this bill but I have to make sure I have the money in my checking account. And anyway, I AM THE ESTATE!”  I have sunk to a new low; I am now praying for people like Paul prayed for Alexander.

I’ve said I’m going to blog about this madness that has resulted from Dave’s, untimely to me, death. There are things you can do now to help you in the event your spouse passes away. Things that will make all the paperwork, banking, legal krap, etc. much, much easier on the one left behind. I’m working on some blog entries now and will, after the first of the year, present them to you. I thought we could all get through Christmas and the Holidays first and then, like going back to school, start on 2 January.

Wife to Widow: Preparedness Training is the working title; I certainly like…well, you know what I mean…wry smile…the Wife to Widow part…it’s at least apropos in my state…and I’m still trying to figure out the secondary part.

Would someone help me with a blog button, please and thank you? I’m giving away what I’ve learned, via the school of hard knocks, for free and would like to get the word out to as many as possible. Yeah, maybe it is a bit macabre but, believe me, the more information and knowledge you have at hand, the better off you’ll be. When you’re in a vulnerable situation, sharks are circling like mad and just waiting for you to stumble and fall into the water so they can finish you off. Everyone has their hand out and it’s a juggling act, figuring out who gets what first.