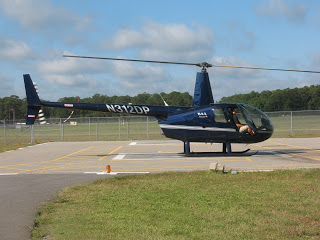 Wouldn’t you agree, some fears are easier to face than others? For example, I am terrified of heights yet it was I who encouraged Dave and S-2, as Dave calls her, to take a helicopter ride over Myrtle Beach. Dave calls her S-2 and me S-1 to let us know to whom he’s speaking, otherwise, both of us would always turn and say, “Yes?”. Sandra’s sister, nephew and Sandra’s daughter had all taken such a ride and pronounced it “wonderful!” and that was incentive enough for me us. 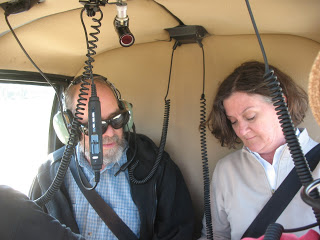 ~ Dave and S-2 ~
Dave was buckled in right behind the pilot, Sandra to his left and me in the co-pilot’s seat. HA! The only thing I’d be good for if something happened would be praying loud and louder; I’m not sure I could have piloted a ‘copter because it’s so very different than a plane. I have had a lesson or three in what to do should trouble arise in a 2-seater airplane and, with God’s help, think I could get it safely down. But a copter? Probably no as in No Way! I used to date a pilot and, on a brilliant weekend, we’d fly thither and yon so we could have lunch in far flung places…fun! 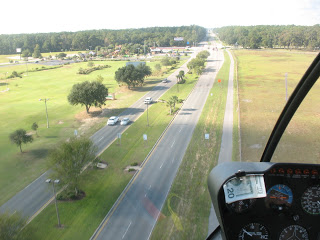 ~ Highway 17 ~
If you’ve ever flown in a ‘copter you’re familiar with the whoosh of leaving the ground; it’s a fabulous feeling, one akin to actual bird flight or so I think. I love that feeling…one second you’re on the ground, waiting, the next second you’re in the air, turning…whoosh! 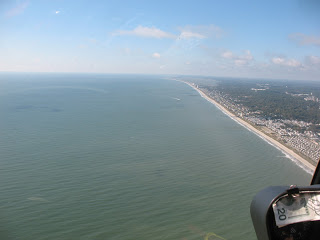 We flew south, toward Surfside Beach and Murrels Inlet and saw boats, sharks and schools of fish in the ocean…not that they were very clearly seen, after all, we were 800 feet in the air!

Murrels Inlet is the home of author Mickey Spillane, one of the first hard nose detective writers and, imho, one of the best. He shared the reputation of his Private Investigator, Mike Hammer; while both were hard and, to some, difficult to get along with, they were also endowed with a righteous sense of justice. Spillane’s books were filled with sex and violence and, dare I admit it?, I enjoyed them, mostly. I wasn’t as thrilled with the sex part…already know pretty much what there is to know about sex -smile-…but I thrilled when the good guy, Mike Hammer, did in the bad guy and Boys Howdy did he ever do in the bad guy! There was a lot of violence, blood spilled, bones broken…and this was on both sides of good and bad guys…but, eventually, the good guy won and justice, albeit vigilante justice, prevailed. Hurrah for the guy in the white hat! So to speak. As Mike Hammer said in I, The Jury, “I don’t want to arrest anyone, I just want to shoot somebody.”

There have been two actors to play Mike Hammer on television; Darren McGavin did 78 episodes in the late 1950’s and early 1960’s while Stacy Keach played Hammer in the mid-1980’s. Keach called Hammer an “Old Testament kind of guy. He has little or no tolerance for bureaucracy and political expediency.” 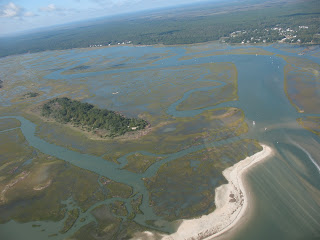 ~ estuaries ~
From the air, estuaries may be seen; this is where fresh water flows into the ocean and, where it meets, the water is brackish. If you click on estuaries, you’ll have a lot of information which is especially useful if you home school. 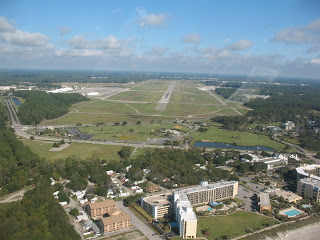 We’re headed back to land and the entire way I’ve been taking pictures with my right hand and my left hand has a…death grip -yeah, I had to say it, smile-…on the side of the copter. When we landed, one of the other pilots asked me if I enjoyed it. I said, “yes, I loved it and if grip alone could have saved us, we’d have flown forever!” He looked startled and then laughed. “Why did you go up if it made you uneasy?” he asked. My response, “I wasn’t uneasy, I was frightened to death but it’s always a good thing to face fear, pray and come out the other side a better person. Besides, the pilot doesn’t want to die today any more than do I.”

So, what’s your fear and how do you face it? I know there are fears that are more difficult to face than others; God knows that I know! Yet, when I face fear, I also always face God and pray. Whatever happens, He hears and I know He hears. If He can calm the ocean, He can calm my fears!