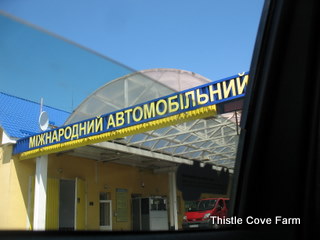 ~  Ukraine border ~
We crossed the Tisza River on the Friendship Bridge and I took this quick photo but unbeknowest to the border guards. In every country, border guards frown upon photos at the border and my traveling companions were uneasy with me doing this but I was sneaky quick. Er, maybe that is sneaky quick. 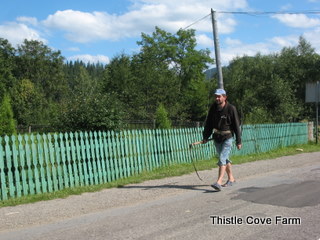 ~ going to the hayfield ~
All over Eastern Europe hay harvest is still done by hand and the entire family pitches in to help. 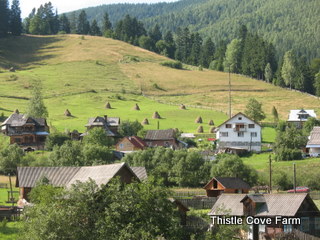 ~ Ukraine village ~
Romania is beautiful but Ukraine seemed even more beautiful; at least, to my eye. It seemed lighter and cleaner even though the roads were dreadful. I’m used to mountain roads but my traveling companions are not and they were appalled at road conditions. We would travel for miles on what I call washbasin roads…gravel, dust and bumpity bumpity meaning the vehicle had to slow down to twenty miles, or less, per hour. 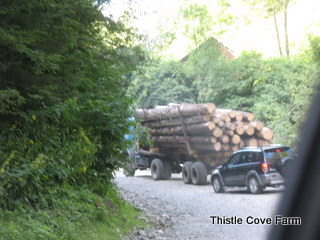 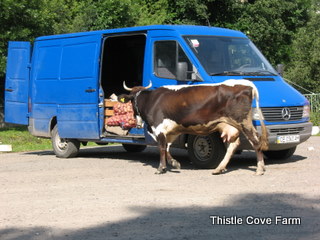 ~ potatoes need milk…right? ~
Cows wandered freely and drivers had to watch out, constantly, so someone’s livelihood wasn’t injured or killed. It made the drive so much more interesting! 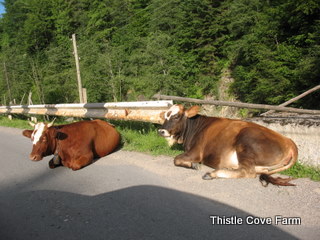 ~ chewing cud ~
Cows, sheep, goats and other animals have four compartments to their stomachs and are able to chew their cud or ruminate.  These two bossies reminded me of females the world over who gather to “chew their cud” and catch up on “news”, otherwise known as gossip…smile.
The first town we stayed at in Ukraine was Kocib and while there, visited the large market. Flea markets are the same all over the world…you can buy any and everything if you know where to look and who to ask and is why we stayed in Kocib and not Kolomiya, which we only visited. Most of the people on this trip are of Slovakian or Czech heritage and are “Kroj Chasers”…my term…and most of this trip was spent searching out local, vintage dress now called costumes. Most of the time it was funny but other times it was just downright exasperating watching some run to and fro, absolutely terrified someone would get something and best them…it was absolutely insane!… in my humble opinion. 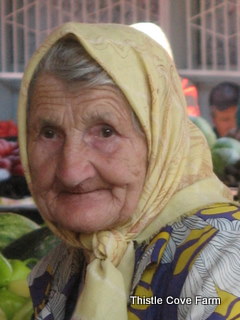 Did you think I could leave out the sweet faces? -smile- 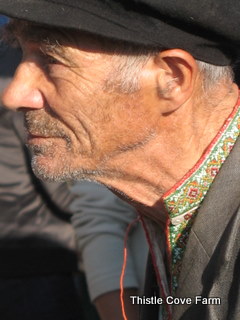 ~ embroidered linen shirt ~
This gentleman has on an example of kroj. His linen shirt is handmade and hand embroidered and he said he had about four more at home that are similar. He doesn’t know just how close he came to being stripped naked and handed a few coins for his shirt…close call, Sir, and you, perhaps, don’t even know.
In Kolomiya we visited the Pysanka Museum, aka Easter Egg Museum, as well as an ethnographic museum. I also spent some pleasurable time sitting at a cafe, drinking Staropramen and people watching. A litre of beer, quality draft Staropramen, cost 9 Hryvnia which was about $1.25…bliss! Ahhhh…if only Dave had been with me; Staropramen is our favorite beer. 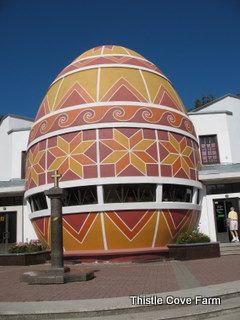 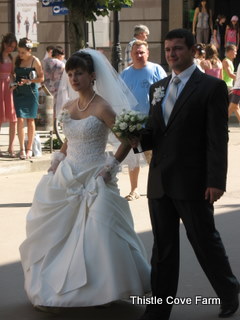 ~ bride and groom ~
During the course of one afternoon, I saw half dozen, perhaps more, weddings. The wedding party would parade through the streets going from there to somewhere else, presumably to party. 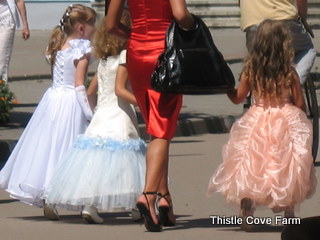 There’s more, much more, but this will have to do for now. It’s past time for me to do chores and I’m burning daylight. I’ll leave you with one more photo and with the promise, should you wish me to, to continue the travelogue next week. 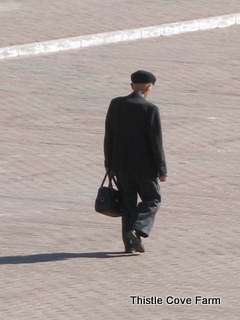