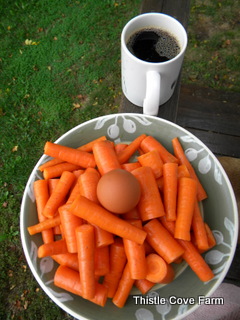 ~ carrots, egg, cup of coffee ~
It seems one day, a young woman went to her mother and told her how difficult her life was and how she, desperately, wanted to give up. The girl just didn’t know how she was going to face today, much less tomorrow. The struggles and the fight were so great, she seemed so defenseless and new problems arose more quickly than old problems could be solved; or so it seemed. She was tired, exhausted in fact, and wanted to give up.
Her mother carefully listened then took her daughter into the kitchen. The mother filled three pots with water, put each pot over high heat and when the pots came to a boil, she placed in one carrots, in the second pot she placed an egg and in the last pot she placed ground coffee. For about fifteen minutes she let the pots boil, all the while listening to her daughter’s tales of woe.
When she turned off the burners, she placed the carrots in a bowl, the egg in another bowl and the coffee in a third bowl. She looked at her daughter, “what do you see?” she asked.  The daughter looked askance at her mother and in a tight, small voice she replied, “carrots, egg and coffee.”
Her mother asked her daughter to feel the carrots and when the daughter poked at the carrots, she said they were soft and mushy. Then, the daughter took the egg, tapped it on the counter and peeled the egg, noticing it had become hard boiled. The mother asked her daughter to sip the coffee and the daughter obliged her mother and said, “it’s delicious but what does all this mean?”
The girl’s mother explained how the carrots, the egg and the coffee grounds had all faced the same adversity: boiling water but each reacted differently. The raw carrots were hard and un-bendable without breaking but the boiling water softened them and they became weak. The fragile egg had been protected by its thick outer shell but the boiling water hardened the inside of the egg and made the shell fragile. The ground coffee reacted differently. After a while in the boiling water, it was the water that changed into a fragrant, aromatic beverage.
The mother looked at her daughter. “Are you a carrot, an egg or coffee grounds? When adversity knocks at your door, do you respond as the carrot? It seemed strong but, when faced with adversity, the carrot became soft and lost its strength. Are you the egg? The egg starts with a gentle inside, a malleable heart if you will, but with the boiling water, the egg became hard on the inside. Oh, it still looked much the same on the outside but on the inside it’s hard and tough. The coffee grounds didn’t change as much as they changed their surroundings. They became better, not bitter, in adversity and changed their surroundings.”
How do you handle adversity? When times are difficult…and they will become if they haven’t already… how do you respond? When your situation becomes overwhelming…and it will if it hasn’t already… how will you respond? Where do you go, to whom do you turn when life is bleak and dark? I turn to Jesus but you knew that already, didn’t you? -smile- If it weren’t for Him, I’d have stayed in bed this morning. If you’d like to talk about Him, e-mail me and we’ll talk; there’s no better friend than Jesus.
Blessings ~ proverbs ~ adversity ~ better, not bitter ~ Jesus ~
Share
Pin
Email
« Sabbath Keeping
Sabbath Keeping »