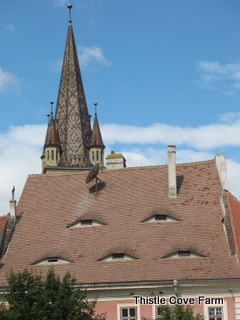 Remember the Grandfather in Moonstruck? At one point, conversation going on like a tennis match and he looks around the table…”I’m so confused!” That’s me. I’m so confused.  It’s day something or other, I’m not sure which so, for the title, I’ve just give the name of one of the places we visited today. We’re actually staying in Sighetu Marmatiei, Romania and the Ukraine border is very near here. We’ll cross tomorrow, hopefully, it will only take a few hours but who knows? 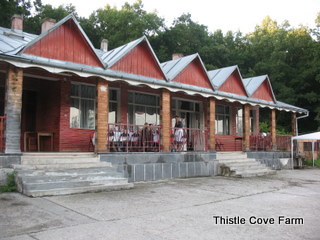 ~ where we ate one night ~
I’m not sure many people would be happy with the way we’re traveling. We have a destination, generally, but getting there is, usually, exciting. The first night we left Serbia for Romania, we had no idea where we would eat supper; additionally, we were driving about 400 kms…or ‘clicks’ as Dave likes to say… and it was beginning to edge on toward night with a long distance left to travel. At a rather good pace, we passed the above restaurant and Jozef, in the lead, slammed on brakes and whipped left. Our driver, Inez, slammed on brakes and pulled to the shoulder; we waited while Jozef went to investigate. A few minutes he came out, pronounced the place satisfactory and we all pulled in to eat. 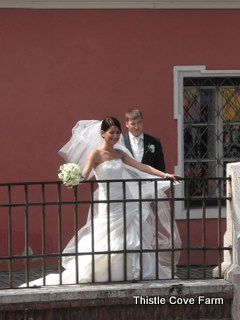 ~ bride and groom at Bridge of Lies, Sibiu ~
So, what did we eat? The wedding party’s soup! Yes, folks were being married at the village church and we were eating their supper…I kid you not; it was good too…smile. After soup, they fed us grilled pork and french fries and we were happy, happy, happy to get that food.As we were leaving the restaurant, they were busy making more soup! We arrived at our hotel in Sibiu at midnight, exhausted, and happy, happy, happy to be there safely as well!
Next day, I saw the above bride and groom having their photographs taken at the Bridge of Lies, so called, I was told, because it’s a favorite place for young lovers to stroll. Apparently, young lovers like to tell things that aren’t true; or is it they simply confuse lust with love? 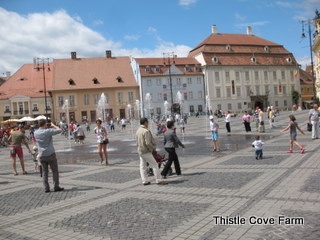 I adore the squares of old European cities and towns. Sibiu is quite old,built in the 12th century, the largest and wealthiest of seven walled cities built by German settlers called Transylvanian Saxons. It’s home to the first hospital in Romania in 1292, the oldest museum in1817 and the first book published in Romania was published in Sibiu in 1544. In 2007, when Dave and I were last in Sibiu, it was named a European Cultural City; it’s easy to see why! 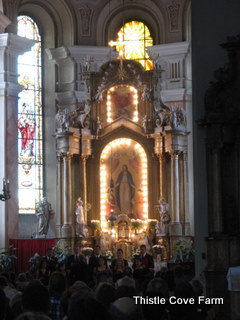 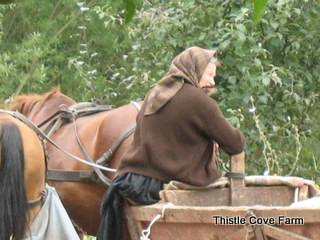 So much of the old ways still exist…there are still shepherds who live with their flocks and men who go out in the morning with their cows and all return home at night where the cows will be milked. Who do you know who could be alone with their own thoughts day in and day out and not go crazy? I like love the solitude but a few in our group shake their heads; perhaps not liking or not understanding. 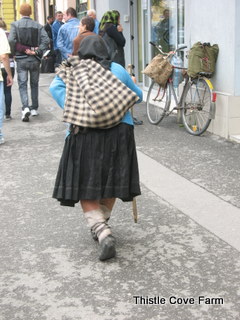 Every now and again, I’d see an old woman, bent over with age and, probably, arthritis, walking purposefully on her way from somewhere to somewhere else. I hope she found family and love when she arrived. 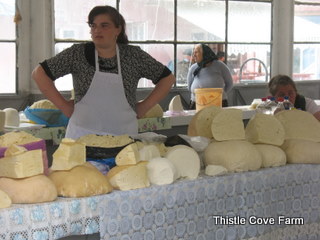 ~ maker and seller of cheeses ~
In Sighetu Marmatiei, we found the market, a never ending fount of photo opportunities! 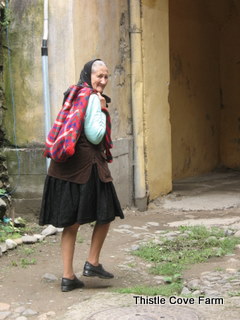 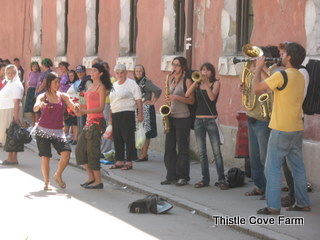 ~ gypsy musicians ~
Later, in the afternoon, this group of musicians came to the market to play music, engage folks in dance, song and donations. Can you see the Grandma in the left? She’s looking askance at the whole thing, perhaps wondering where their family is and why are these young people, boys and girls, traveling together? 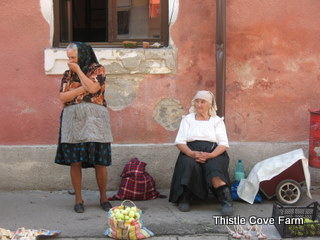 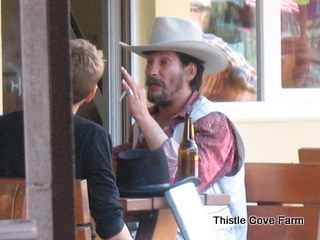 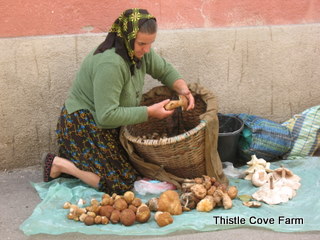 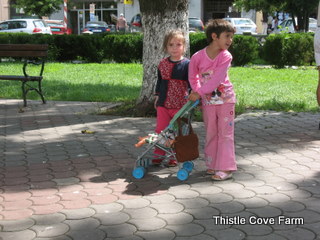 ~ Grandma’s in the making ~
These two were busy, running up and down the park, pretending to push their baby, purse hanging off the side of the stroller…Grandma’s in the making, a few decades hence.  I spent a goodly portion of the afternoon in the park, simply people watching. I did a sketch or two but I get so caught up in the people that I’m happy to simply “be”.
Still to come, Sapanta, Merry Cemetery and the photo of the spinner and myself, the weaver and myself and me in the Cemetery with the headstones of spinners, shepherds, weavers gone on before. Stayed tuned, it will be well worth it!
Blessings ~ Sighetu Mrmatiei ~ markets ~ Grandma’s ~ horses, carts, wagons ~ music ~ Grandma’s in the making ~
Share
Pin
Email
« Serbia, Day 6
Romania – Sapanta, Merry Cemetery »