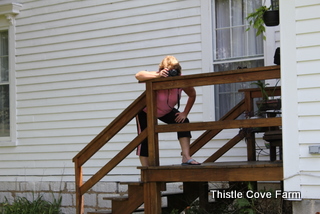 ~ Beloved Sistah ~
The past few weeks have been chocked full of busyness but now we’re winding down. My family was here this week and we thoroughly enjoyed their visit but Thursday night, before they left early Friday morning, we received a phone call from a Baltimore cousin who tracked Mom and Daddy here. Richard had bad news; earlier, around 7:00 p.m., Aunt Esther had an apparent heart attack and died. She had fallen in her front yard, going to visit Ocie, her beloved friend of more than seven decades! and next door neighbor. Ocie was waiting on her porch, saw Aunt Esther fall and ran out with blanket, pillow and telephone to call for help. Before help or family could arrive, Aunt Esther died, held lovingly in Ocie’s arms. Thank God, it was quick and she suffered little; finally, she’s at peace and with Uncle Clarence, her husband, and Frank, her son, both of whom had gone Home decades earlier.
When Aunt Esther and I visited a few weeks ago, she was full of talk about how “life doesn’t seem fair. I don’t mean to complain but it just doesn’t seem fair. Clarence went decades ago and Frank followed, leaving me behind. I just don’t understand.” Neither do I but we both decided, again, we’d trust God and believe He knows best; our life is in His hands, His Good Hands, and so we trust.
Aunt Esther’s favorite poem was The House By the Side of the Road by Sam Walter Foss: 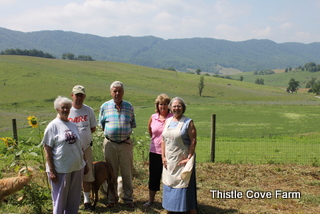 ~ mo mhuimtir ~
Dave and I have made this weekend a wee-cation…get it? I’m rather a clever gal, aren’t I (huge chortle)! We went to the library this morning, downloaded some audio books then came home and napped. It’s been cool, no warmer than 59 degrees F and great sleeping weather. Home is where I need to be nestled, contained, held, loved right now. Home is the great sustaining influence in my life while Christ is the great sustaining influence over my life. Dave and I have built Sanctuary here at Thistle Cove Farm and have been blessed to share it with many.
My fondest desire is that I’ve been a friend to man, living in my house by the side of the road. That most people who come here find a blessing and not a curse, although, at times, I know too well how I’ve failed and ask forgiveness of those whom I’ve injured. Whenever possible, I want to cast off me and put on the mantle of Christ; let people see Him in both His handiwork and our lives; less of me, more of Him.
Save me a place, Aunt Esther; I’ll be Home directly.
Blessings ~ Aunt Esther ~ my family ~ Uncle Clarence ~ Frank ~ Dave ~ Thistle Cove Farm ~
~ Christ ~