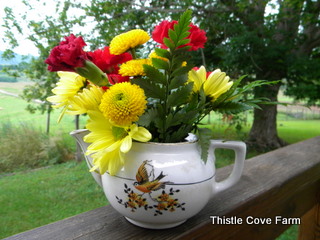 ~ teapot cum vase ~
This diminutive teapot was found at a thrift store for about twenty-five cents and though the top was missing, I just couldn’t leave it and thought it would make a sweet flower vase. It does too and daintily sits on those smallish spots such as bathroom vanity, bedside table or beside the coffee pot in the kitchen. It’s another small way to add a bit of poignant beauty to our day. As I cut flowers, they rest in a pot of lukewarm water which makes them last even longer, and the bottom leaves are removed because they dirty the water. Changing the water every other day is another way to make the flowers last a tad longer. When the water is changed, about half an inch is cut off the bottom of each stem and, if I have no floral additive, I’ll add a teaspoon of sugar or a crushed aspirin to help them last longer. As each blossom is spent, it’s removed from the arrangement and, if necessary, more greenery, Queen Anne’s lace or cut flowers from the garden are added as filler. This small arrangement will last a couple of weeks, sometimes longer, depending upon time of year, what’s available, temperature, etc. 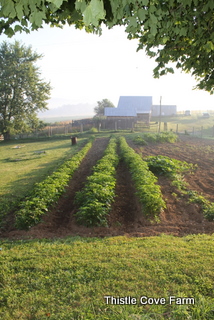 ~ potatoes ~
The potatoes seem to be doing well; from the left the first two rows are Kennebec white potatoes; the third row is Yukon Gold and the smaller, fourth row is, in order, Beauregard sweet potatoes, Sugar Baby watermelon and pumpkins although I can’t remember what kind. Thus far, I’ve planted eighty pounds of potatoes and have fifteen more pounds to plant. The sweet potatoes and melons don’t seem to be doing as well because, when I planted them, I didn’t think they would mind the two to three hours of shade they receive each day. I was wrong! They mind, a lot, and just seem to struggle to keep up so I’m going to set black grow cloth underneath and that will help warm them up a bit and extend their growing season.
At the far end of the row are Lil’ Ironside pumpkins, Roma beans, yellow squash, zucchini, fingerling potatoes and other things I don’t remember right now. Canning cucumbers grow alongside the fence, near the gourds. Daniel, Morgan (his daughter), Shawn (her boyfriend) and I spent a good part of Saturday tending to the garden and Saturday night I was able to fertilize everything. We had about half inch of rain Sunday and again yesterday so the garden is well watered. Today it was sunny and the weather is supposed to be sunny/rainy for the rest of the week…great growing weather!
All righty then…the folks are here to de-worm sheep so this post has to be “saved” until it can be finished. That’s how it constantly goes around here…life interruptus…daily and always. But I’m happy to have the help so I’m not complaining…bye for now…

It’s now past 10 at night; sheep have been de-wormed, water trough filled for horses, supper prepared, eaten and kitchen cleaned and we’ve tossed a couple of games of horseshoes. We played until it was too dark to see the poles so we were simply pitching toward the pit. I’ve not pitched shoes in, probably, thirty years but didn’t do too badly; I threw one ringer, a leaner and a bunch of one pointers. The first game, girls against boys, girls lost by many points. The second game, again girls against boys, we lost by one point. Not too bad especially when you consider the good-natured bantering going on, quite loudly. (huge smile!) 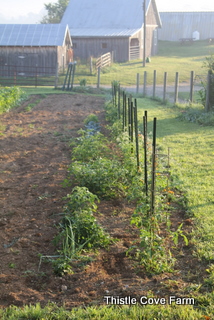 ~ right side of garden ~

There are more than forty tomatoes planted, onions, scallions, garlic, radishes, red cabbage, beans and more corn. The middle, seemingly unplanted garden section, is planted with sweet corn. I have more beans, flowers and other things to plant but the season is running out on me.

~I don’t have as many cut flowers planted as I’d wanted but there’s always next year. For drying flowers, I don’t use silica gel as it’s rather expensive. An even mixture of borax and cornmeal works just fine and it’s much less expensive.
~Double plant – my corn and beans are planted together both to save space and to give the beans a pole. The beans fix the nitrogen in the soil, giving the corn a boost.
~The gourds are planted alongside the fence, again to give them a pole.
~Tomatoes are staked to make it easier to pick the fruit plus it prevents blight.
~Marigolds are planted next to the tomatoes as an aid in preventing bugs. Marigolds don’t have a pleasant odor and bugs stay away.
~It’s just about time to decide what to plant as cold weather crops. Brussels sprouts, parsnips and kale all taste better after being nipped by frost.
~When it’s time to leave the garden, I have a wash station set up at the outdoor spiget. A nylon scrubbie and soap keeps hands clean while an old toothbrush serves to scrub my nails.

My days begin around dawn although, sometimes, I sleep in. Today I slept in until almost 7 but had to go to town and that’s always a time eater. It’s impossible for me to get to town, do errands and home again in under three hours; today it was four hours. Lately, I’ve been waving at my studio in passing (wry smile) but life is good and, since complaining takes time away from being happy, I try to keep the carping to a bare minimum. 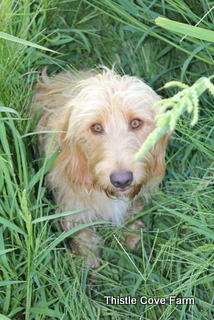 The dogs are crashed out on the floor, long fed up with not being in bed, so I’ll take my cue from them and say good-night.

God bless us everyone!