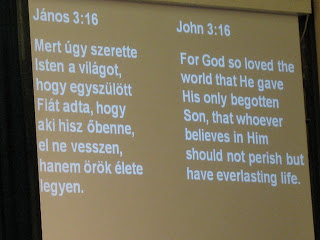 ~ John 3:16 ~
Please forgive me but I’m breaking with traditional Sabbath Keeping. Today, I’ll tell you how the Sabbath was kept here, Budapest Day 2, and give a travelogue as well.

Timi, Mikki (her husband) and Mira (their daughter) met me at 9:00 at my Budapest apartment. I’d gone to the reception desk, located in another building, so I could pay my rent and the nice young gent said, “your friends were just here, maybe 2 minutes ago.” I told him, ala Arnold, “I’ll be back…to pay my bill” and he said, “hurry, you should catch them; I sent them to your apartment.” We met outside, just at the door, and then walked several blocks to Calvary Chapel. The congregation meets in an old movie theatre and their pastor is a young man from Australia. Sunday morning services are at 8, 10 and noon; we attended the 10 a.m. service. Services are conducted in English with Hungarian translation and no one missed a word; not a tittle nor jot. 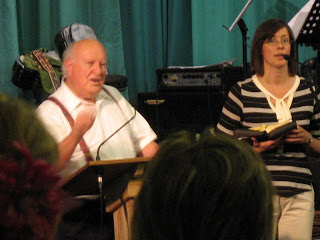 ~ guest speaker ~
His word came shining through the guest speaker who, today, was from Palm Springs, California! I am not sure of his name but he is a man of God and, I’m convinced, a man after God’s own heart as well. His sermon was on John 3:16 and I’ve never heard finer! He and his wife have been married 58 years and he brought in personal stories as well as Biblical stories to make every word relevant and pertinent to each person in the congregation. I’m telling you, it was an amazing sermon but, like Paul, from a man who, by his own admission, is “short, fat, bald and wears suspenders”, be that as it may, the Word was heard today. Additionally, Calvary Chapel has a wonderful history in Hungary and Budapest; please go here to read more. 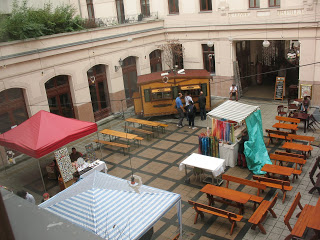 ~ crafters in courtyard ~
Truly, it was my intent to return ‘home’ early enough to visit the crafters in the courtyard. They only set up every Sunday and are here until 6 at night. Surely, I thought, we’d be finished our day well in time for me to buy some treasures. Not hardly, not even close. The four of us left the apartment around 9, went to church services, came back to use the bathroom, etc. and then we traipsed all over Budapest. It mattered not it was, at times, pouring rain.
Recently, I read a quote I absolutely adore, “there is no such thing as bad weather, only inappropriate clothing.” Sir Ranulph Fiennes said it and we put it to the test today. There were places I wanted to visit but hadn’t said anything to Timi; bless me, we visited just about all of them! It was fabulous, wonderfully fabulous and I’m gearing up for tomorrow. Mira, her daughter, was born in Budapest but had not been back since a few months old. It was delightful seeing the city through her eyes; her first subway ride, the art exhibit Jane and Lance spoke of in an earlier blog post…so many first and seen through the eyes of a ten year old girl…delightful! 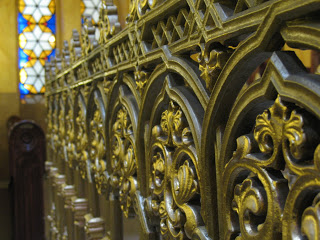 ~ gold leaf ~
Oh gosh; I’m not even through the first two hours of today, and already I’m winded! We visited the inside of the Dohany Street Synagogue and had a tour where I learned the Synagogue was built in 1854, is Very Ornate and does not look at all like other synagogues and more about the Holocaust than I wanted to know. Please, don’t misunderstand, I feel we should all know about the inhumanity done to man by other men but it pains me greatly to hear, read and see it. Some estimates say more than six (6) million Jews were killed in concentration camps and while that is an awful tragedy, it pales when one knows more than eleven million (11) people were killed in those concentration camps. Hitler wanted Jews, crippled, mentally retarded, disabled people of every kind and the list goes on and on and on…killed. I find it enormously confusing Hitler wanted an Aryan race while he himself was dark and swarthy! 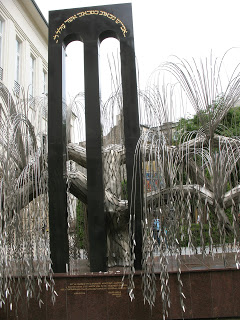 ~ Weeping Willow Memorial ~
Remember the American actor Tony Curtis? He was born Bernie Schwartz in Manhattan and his wife, Janet Leigh, had a daughter, Jamie Lee Curtis. I was surprised to find out the parents of Mr. Curtis were Jewish Hungarian immigrants and the above Weeping Willow Memorial is in the Budapest synagogue courtyard, courtesy of Mr. Curtis. Each leaf bears the name of a person who was killed in a concentration camp and many leaves are left unmarked in the event more names come to light. 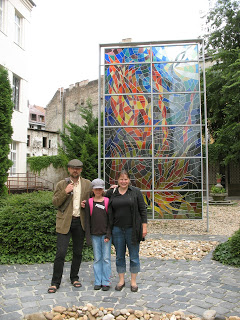 ~ Mikki, Metta and Timi ~
Above, Mikki, Mira and Timi stand in front of the stained glass memorial flame on the synagogue grounds. After leaving the synagogue, we began walking around the city and taking photographs. 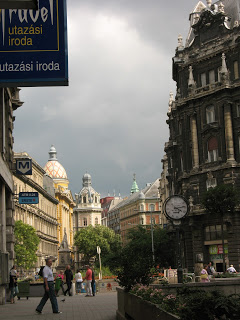 This photo was taken on our way to Vaci Street, known for high end retail stores, fabulous restaurants and delicious ice cream as we four can now attest. It was at this time, the heavens opened and the rain began to pour. We were sitting, comfortably, under an umbrella at the ice cream shop when others rushed in and began slinging their (considerable) weight around. Oh dear, I sound testy, now, don’t I? (smile) We sat there for a long while, convinced the rain would stop “soon” but it never stopped. So, we just got up and continued strolling…in our appropriate clothing, to be sure! (grin) 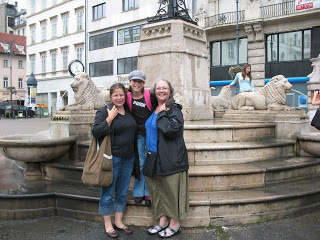 So much fun! Timi told me the water spewing from the mouth of the lions is good to drink. There’s an underground acquifer that supplies the city with pure, clean drinking water. I’ve been drinking the tap water with no ill effects…thank you God…and it is good water. 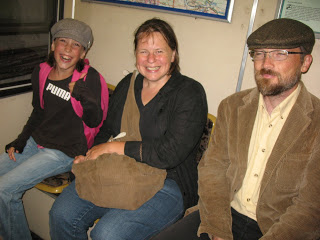 Are these people having fun or what?! I’d say YES! 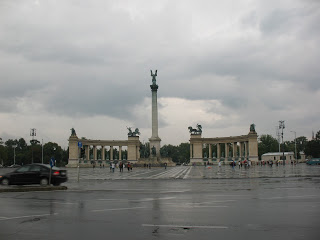 As we strode up the subway steps, this was the sight that greeted us; I gasped aloud! This is the 19th century monument depicting the beginnings of Hungary. It’s not entirely sure from whence the seven original tribes came…perhaps the Ural Mountains, Mongols, Ukraine, some other part of Russia…but I dare say there aren’t people alive today who can sculpt like this! 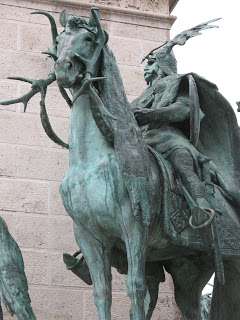 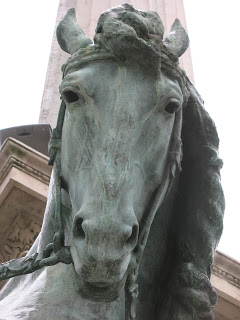 ~ so expressive ~
There are people…me for one…who cannot draw such an expressive face much less sculpt one! 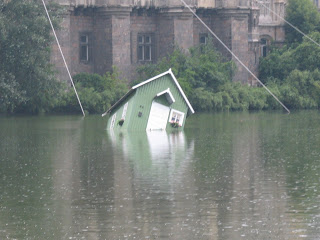 Recently, Jane and Lance posted an entry entitled “Messing About in Boats” and today, Timi, Mikki, Metta and I saw the exhibition. I might as well admit, because my comment on their post bears this out, this exhibit left me…shaking my head and saying, “whaaaat?” It’s something that needs to be seen to fully appreciate it, at least that’s what I believe now that I’ve seen the exhibit. Please read their post but I found the exhibit to be quite witty and what it lost in photographic translation, for me at least, it more than made up for in viewing! 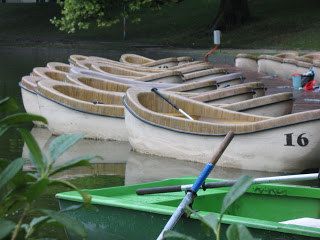 Oh, how I would have loved to take a ride in one of these beautiful boats. The lake is quite shallow, only about a meter so, if need be, one could walk around and barely get their knees wet. But these boats are so beautiful; I felt the need to row one and phooey on the rain anyway! 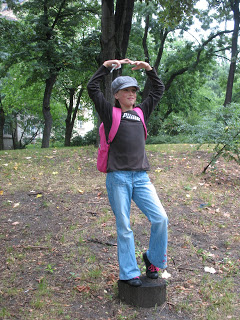 ~ Mira statue ~
Earlier in the day, we saw one of those human statues who stand quite still, all day and all for tips only. Amazing! Mira was quite taken with the man and this was her version. She held her post a long time and it was only when she realized we were, shortly, to be round the bend and out of sight, she broke her pose. I told her if she’d taken her hat off, placed it on the ground in front of her, I would have given her a tip! 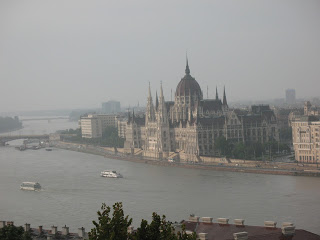 ~ Parliament, in the background, Danube River in front ~
So much more, so many more photos but it’s late and Timi will be here bright and early in the morning. We’ve more sight-seeing and mustn’t forget the shopping so will close for now. I leave you with one last photos that sums up our day. 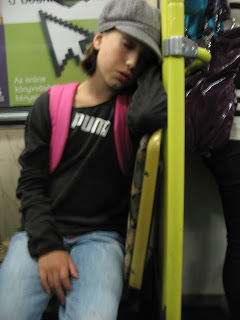