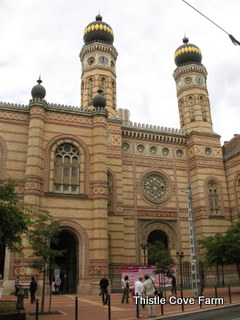 ~ Dohany Street Synagogue ~
I left the USA from Charlotte, NC on Friday evening but not until USAir managed to sell my seat…twice it would appear! I’d love to be able to say “thank you, USAir” but I can’t…just really don’t have it in me to say thanks for adding so much grief to my life that if, in the future, other choices are available, USAir has seen the last of my money. Enuf said although I’m twitching like a cat because I want to say more (grin!) and, ending on an upbeat note, will say, “thanks for a safe flight;”at least that can be said truthfully!
After an arduous flight and airport navigation in Frankfurt, I am in Budapest! It’s a lovely city, full of Old Worlde Charm (yeah, I really struggled, and lost, the battle to put that ‘e’ on the end of ‘world’) and I feel deju vu all over again. It’s weird, like I’ve been here before and almost everything looks familiar. I believe a lot of that feeling may be credited to the overwhelming presence of the Communist era buildings. There’s a certain soulessness, if you’ll allow the use of the word, to those buildings built during Communist times. I’ve been told there was a dearth of talented workers and contractors would hire day labor on construction sites. There was no rhyme nor reason in how the concrete mixture was made…one day with too much water, the next day with too little water and the result is, a lot of buildings are, literally, falling apart. So sad. 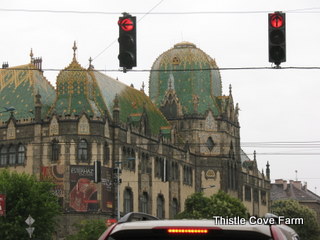 ~ Moorish influence ~
However, those lovely pre-Communism buildings are still fabulously lovely, sturdy and a feast for the eyes. You can tell, beyond a shadow of doubt, someone who knew construction, was comfortable with building materials, plans, etc. built, with a fierce love, these old buildings. I am not sure what the above building is but know it is lovely; a real thing of beauty with loads of Moorish influence. 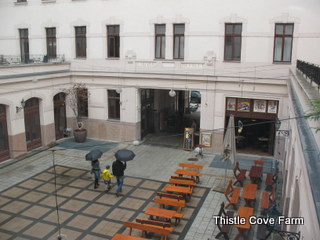 ~ All-4U Apartments courtyard ~
My Budapest home is located about two blocks from the Dohany Street Synagogue, the second largest in the world. A busy thoroughfare, Karoly Street, is just steps away, and where I found a grocery store that accepts credit cards and an ATM machine. I had American dollars and Euro’s but no Hungarian forint’s; my apartment takes only m.o.n.e.y.; no credit cards, checks, etc. However, they allowed me to pay them a deposit in US until I can get to an ATM and finish paying them in forint’s.
If you’re ever in Budapest, you should consider renting from these folks; thus far they have been more than kind and have advised on where to grocery shop, find ATM machines and even told me the courtyard will be full, tomorrow, of crafters…JOY! Another reason to hurry along to that ATM machine but my guess is Euro’s and American dollars will be welcome as well although the US dollar is weak right now. ouch.
I think I am near to Vaci Street, although not sure, exactly, how near. It’s a lovely pedestrian walk, the main thoroughfare of Pest, full of upscale shops, restaurants, cafes and beautiful houses. Ah, the houses…I expect to take loads of photos of the houses but, probably, won’t do a lot of shopping as “upscale shops” really doesn’t turn my crank. 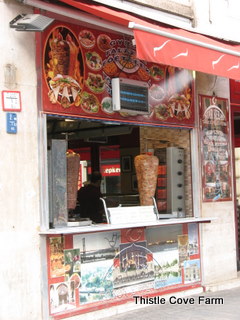 ~ nearby walk-up restaurant ~
There are many delights in Europe, especially eastern Europe, and the above is one. It’s what I call a ‘walk-up restaurant’ and those “things” hanging are meat. It appeared one could order a sandwich and the meat would be trimmed and placed into a bread slice. It looked delicious and I’ll try before I leave but I’m not too adventuresome with food and water while traveling alone because it’s horrid to become ill and have no one to care (smile).  Hungary hasn’t been ruined by the European Union, yet, and these open air restaurants still exist. A few years ago, when Dave and I were in Romania, we visited an old feller who made hooch also known as white lightening. He had a grand still going and he was about snookered as well but it was a great visit. We’ve since heard he had to tear down his still because of EU rules…boooooo! hisssssss! Let the man earn his living, I say. Moderation in all things is what the Good Book says and I believe Paul, when he says in Timothy,  “a little wine is good for the stomach’s sake” but let me hasten to repeat…moderation in all things. There are those for whom drink is the devil’s tool and it’s best to stay away.
Today was spent, mainly getting over jet lag and it’s now almost 3 a.m. I’ve had two splendid naps and am headed for bed yet again where I’ll sleep a lot longer. Timi, her husband, daughter and I, are going to church in the morning and then they will be my tour guides. Bless her, Timi, is bi-lingual and speaks/writes English so tomorrow will be fabulous! Er, I mean to say, later today.