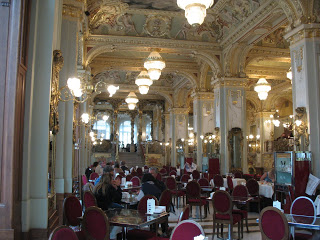 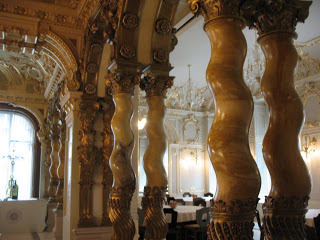 As Blanch DuBois once said, “I have always depended upon the kindness of strangers!” As have I, always depended upon the kindness of strangers, that is. Today, Day 4 in Budapest, found me preparing to meet Jane and Lance, blog friends of some few months thought it can’t have been very many months as they just began blogging in April! Anyway, I had big plans on running some errands…get that? running some errands and I’ve only been in Budapest since Saturday! (smile)…but found myself rushing out the door at 10:00 so I could meet with them at 11:00.

As it turns out, we were meeting right across the small side street from Calvary Chapel where Timi, Mikki, Mira and I had gone to Sunday services! Even so, it took me most of the hour to wind my way back as I’d had tour guides on Sunday and, let’s face it, for the most part, yesterday is a foreign country and the borders are now closed…never mind three days ago!

I’d wanted to go to a florist shop and buy flowers as I really hate turning up to such a delightful invitation, hat in had with empty stomach and nothing more than an appetite to show for my appearance. Wouldn’t you know it? There were no floral shops within a four block radius! Aaaarrrrgggghhhh!

A very few years ago, this hotel was nothing more than a bombed-out shell left over from the Russian days of occupation.  I was told the Russians would drive their tanks into the front doors and leave them, sitting there as a testimony to their prowess. HA! Mother Russia…I’ve said it before and will say it again, such bullying is beneath you; your forefathers are spinning in their graves! 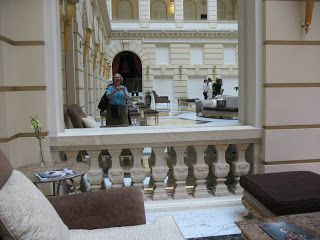 At any rate, Jane, Lance and I had a most delightful time, chatting over coffee, nineteen to the dozen, and, to me at least, it felt like old friends whom I’d not seen in forever. When we rose from the table, to wander ’round the property before heading out, I took our photo…there, don’t you see Jane right behind me? She’s the one in the white hat and black dress…I’d say black and white dress except you can only see the black portion of her dress. Yes, I’m sad to say, that is my mouth hanging open because I was laughing so hard I wasn’t paying attention to when I clicked the shutter!

Suffice it to say, it was delightful meeting them both and lunch was fabulous! Jane, Lance, please forgive me because it’s late and I’m not taking the time to look up the correct spelling…but, Timea, their housekeeper cook was delightful. It’s true, we couldn’t speak a word of the others language but I think she knew I found her luncheon delicious. And, really…it didn’t have a thing to do with me eating cheese, bread and yoghurt for the past three days! (smile) 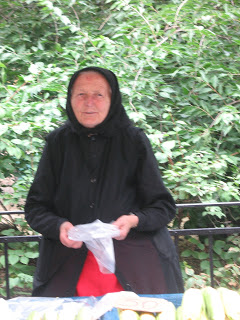 On the way to their apartment, they took me to their local market where this woman was selling produce. She only had corn…perhaps something else left, and I felt badly that I didn’t buy anything. I always hate taking someone’s photo and not buying something. 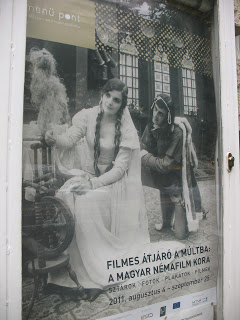 This is their local cinema which plays, mostly, art films. Jane and Lance told me one time they were to view a film and were turned away. Why? Because the theatre needed at least five people in order to run the projector! I only wish I’d asked them about this film above…woman with a spinning wheel, a castle spinning wheel…why oh why didn’t I ask?! 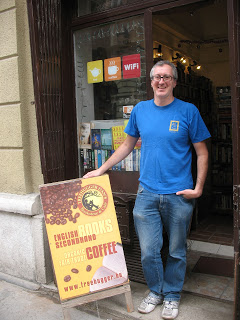 This good looking gent is their local English bookseller and lives rather close to their apartment. Coffee, books and wi-fi…does it get any better?!

After lunch, I went to the post office to mail post cards; the postman was SO helpful. Bless him, he kept asking me, “normal or express?” and I kept looking at him like I belonged on the short bus. I simply couldn’t understand his accent! Finally, his co-worker printed out the words, “normal. express” and I finally understood! I told him, “express, please” and he proceeded to take my post cards, stamp each and every one, put on an express label AND hand cancel each and every one. He made sure I saw each and every step and seem so pleased when I shook his hand and said, “thank you, thank you, thank you!” He was so kind!

Using the map Lance drew for me (thank YOU, Lance!) I went to the subway, bought a ticket, went to my destination and then went above ground to catch my tram to Gellert Baths and Spa. Yes, I had to ask, several times, for help with understanding the directions but that was my misunderstanding, not Lance’s map. One thing I’ve learned while traveling, a soft voice and a lot of pleases and thank you’s will take me as far as I need to go. It seems please and thank you is almost universally understood and everyone, mostly, likes the opportunity to be kind; don’t you? 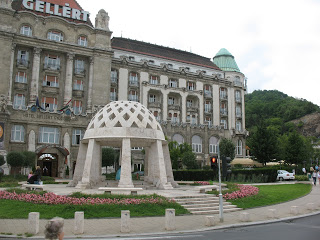 ~ Gellert Baths and Spa ~
Regardless of what some men may think (extremely wicked grin), skin is our largest organ and I firmly believe “taking the thermal waters” is entirely healthful and beneficial in more ways than we can possible understand. I’ve “taken the waters” in two places in the USA and now Budapest, and can testify I feel, at once, relaxed and revived, when finished. I also had a leg and foot massage and it’s a good thing the mineral waters are a ways from me or I’d be wrinkled like a prune most of the time! 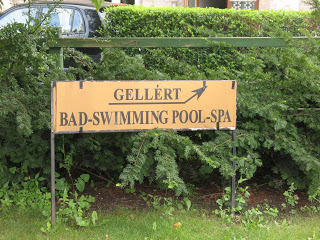 I find the above enormously amusing;
yes, I am a simple soul! 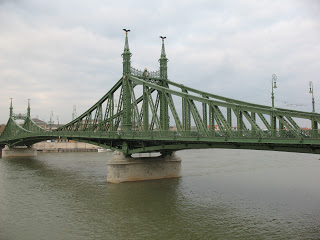 ~ Bridge over the Danube River ~
Seriously, pinch me; I still cannot believe I’m here in Budapest, meeting all these fabulous people, crossing the Danube River, going to the Baths… . A while back a friend said to me, “I’ve always been envious of you, Sandra.” My mouth dropped open, “but WHY?” I asked her. She replied, “because you’re not afraid of anything.” I shook my head. “Yes, I am afraid. I’m afraid if I say “no” to the opportunities God gives me, He’ll stop giving them to me. So, I take a deep breath, say a prayer and move forward. He’s promised never to forsake me nor leave me and I take Him at His word. He’s to be trusted, so I trust Him.“

Simplistic? Perhaps so but here I am, in Budapest, meeting people I’ve only known as bloggers and seeing sights heretofore only seen in books or on the i-net. Earlier today, Jane, Lance and I were talking about people who, when hard times come, say, “Why me, God?” I told Lance and Jane when the good times came, it never occurred to me to say, “Why me, God?” He sends the rain on the just and the unjust; His ways are not my ways nor His thoughts my thoughts…yet I will trust Him. From where I’m typing, seems a pretty good decision on my part!
Blessings ~ Jane and Lance ~ healing mineral waters ~ faith ~ opportunities ~ Danube River ~ travel ~
Share
Pin
Email
« Budapest, Day 3
Serbia, Day 6 »