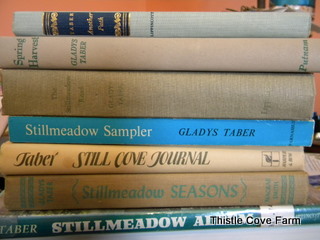 ~ my cache of Mrs. Taber’s books ~
From The House of Edward Pamela asks: what does your summer book list look like?

I adore reading and have from my fifth year when I discovered the newspaper. How exciting it was to read the newspaper. It amazed me then, and amazes me still, how people would put the most personal information for the entire world to read and know! Over the years, it’s gotten even worse in all media; now, you can know things about people that, frankly, aren’t worth knowing and can eat up your most precious commodity: time.
But, as usual, I digress.
My summer reading includes all of my Gladys Taber books:
Spring Harvest, Another Path, Stillmeadow Sampler; Still Cove Journal, Still meadow Seasons and Stillmeadow Album. When I finish those, I may read her cookbook although that’s not as interesting to me. Her cookbook was written at the onset of packaged products and I don’t use a lot of packaged food; no Jello or processed foods around here…for the most part. Although, Dave enjoys things I don’t eat, such as deviled ham, Vi-enner Sausages -as children we used to say-, Kraft Mac ‘n Cheese…no thank you, none of that for me or, not, at least, until I get a lot hungrier!
Other books on the list: 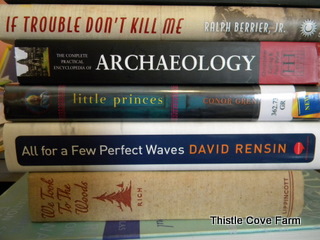 ~ first five on list ~
We Took To The Woods by Louise Dickinson Rich – In the early 1930’s, Mrs. Rich and her husband went “back to the land” in rural Maine. This is a great read, written by someone with a tremendous sense of humor and self. A role model for those of us who are brave enough to celebrate our selves as women and wives. ouch. Did I just lose someone?
All for a Few Perfect Waves – The Audacious Life and Legend of Rebel Surfer Miki Dora by David Rensin – “Da Cat” Dora was king of Malibu surfers for a couple of decades back in the day…1950’s and 1960’s. If you’ve ever seen the 1966 movie Endless Summer…a classic!… Miki Dora was featured. He was also in his fair share of beach party surf movies but none of them personified surfing and the beach like Endless Summer. It certainly made an impression on me and I didn’t see it until a few years after its release. “Da Cat” lived a life that, frankly, I’d tan the breeches of any child of mine…were I to have any…should try. He lived on the outside edges of the law and, in the nicest terms available, could, probably, be called a grifter or hustler or con artist. In the 1970’s he led the FBI and Interpol on a merry seven year chase around the world. It makes for great reading, especially for those of us “of a certain age” and who can remember…back in the day.
little princes – One Man’s Promise to Bring Home the Lost Children of Nepal by Conor Grennan – long, long ago in a country far away, children were given, in good faith, to child traffickers who promised the parents their children would be taken to safety. For a sum of money, of course. As it turns out, a vast sum of money from people already too poor to buy food. But this was their children and for their children they came up with the money so their children could be taken to safety. Their babies. Away from the clutches of Maoist rebels who, during the decade-long civil war from 1996 to 2006, would see more than thirteen thousand lives destroyed. 13,000 people killed. 13,000!
So, parents came up with the extortion money exorbitant sums of money, handed over both money and their children, and rested, secure in the knowledge, their children would be safe from Maoist rebels. But, after taking both children and money, the traffickers would abandon the children, some as young as three years of age, in Kathmandu, Nepal‘s capital. There’s a special place in hades reserved for those who hurt other others or animals.
Within the first nine pages, I was laughing myself silly and knew I would love this book. This is a man who doesn’t take himself very seriously but takes his work extremely seriously. In short, a man confident with self and knowing he can make a difference in this frosty ole world and hurrying to do so as fast as he can. If you want to know more, visit Next Generation Nepal.
The Complete Practical Encyclopedia of Archaeology published by Hermes House – Archaeology and history fascinate me and armchair archaeology is how I scratch the itch. While this book is impressive, I am not impressed. Or, at least, not as impressed as I would be had Carahunge, Armenia been included. Carahunge predates Stonehenge by four thousand years and is Very Impressive. It’s one of the wildest places on earth I’ve ever been and I’d go back in a NY second!
Again, I digress…sorreee…the Encyclopedia of Archaeology has lots of full color photos and detailed information on both archaeology and sites around the world. Really great book that I won’t read word for word but will peruse as a travelogue – for pure pleasure.
If Trouble Don’t Kill Me – A Family’s Story of Brotherhood, War, and Bluegrass by Ralph Berrier, Jr. – Clayton and Saford Hall, bastard brothers, born in The Hollow…although there’s no doubt in my mind it would have been called The Holler…I may not know much but I do know my Appalachian dialects!…but, back in the day, meaning 1930’s and 1940’s, they became legends of the airwaves. They opened for such acts as the Carter Family, Roy Rogers, the Sons of the Pioneers and played the Grand Ole Opry.
Okay, here’s an aside and tale told on me. When I grew up, my Granddaddy played fiddle and, of course, listened to The Grand Ole Opry. As did we all but Mom, his daughter, also listened to Big Band which I also adore to this day. Anyway, I was eighteen years…or older…before I realized that all those bands on the radio…the Beatles, Jefferson Airplane, Stone Ponies, etc. weren’t real. Meaning, aha! you guessed it…they weren’t all standing just yon-side the spotlight, on the side lines and waiting for their turn to go on the air. I remember my girlfriend hootin’ and hollerin’ because she thought I was dumb as a box of rocks. Me? Well, I thought it made sense then and think it makes sense now. After all, my standard was The Grand Ole Opry and that’s the way the Opry folks did it so that must be the way it should be done!
Back to “Trouble” and on the flyleaf: “Making moonshine, working blue-collar jobs, picking fights in bars, chasing women, and living hardscrabble lives… “
Oh yeah. This is going to be a really good read! 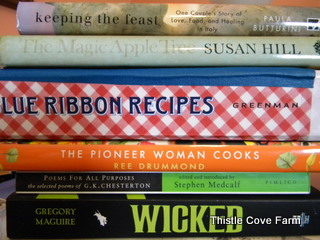 ~ hmmm, do you see a food theme? ~
Wicked – The Life and Times of the Wicked Witch of the West by Gregory Maguire – Dave and I have seen the play, twice, once a road company in Charlotte, NC and once in London. Both times great and both times I walked out amazed at how perception can be reality. It boggles my mind, then and now, and I only hope I enjoy the book as much as the play. Actually, it’s a troublesome concept, I don’t mind telling you, it is!
Poems For All Purposes – the selected poems of G. K. Chesterton – Edited and introduced by Stephen Medcalf – W. H. Auden said it best, “I cannot think of a single comic poem by Chesterton that is not a triumphant success.” From The Vision of the King, Book 1, “Her face was like an open word…”.

For sheer fun, I’ll read Ree Drummond‘s, The Pioneer Woman Cooks. She’s a ton of fun and her recipes are excellent.

And, the Blue Ribbon Recipes – 693 Award-Winners From America’s State and Country Fairs by Barbara Greenman. An unwanted library book finds a welcome home with me!

keeping the feast – One Couple’s Story of Love, Food, and Healing in Italy by Paula Butturini might be a hard read but it’s going to be a good read. Two days before Christmas, 1989, a sniper bullet nearly kills her husband during the Romanian uprising. The bullet wound, infection and a long slide into depression exposes both sides of the family history of depression. Still with me? Mrs. Butturini becomes pregnant at age 45. What shines through is family and, in the end, that’s what matters. Famiglia.

I think I’ll re-listen to The Guernsey Literary and Potato Peel Pie Society by Mary Ann Shaffer and Annie Barrows – Bar none, this is the best audio book I’ve ever heard! I’ve never read the book and, frankly, don’t feel it would do justice as the audio is read in dialect by the various letter writers. It’s an amazing book, full of pathos, love, hatred, hope, fear, anxiety…in short, the stuff of l.i.f.e.  Please, do NOT read this book. Please, listen to this book, then, let me know if you think it as wonderful as do I and don’t buy it…support your library!
Lest we forget… 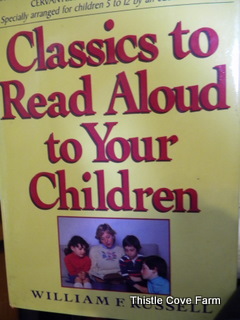 ~ perhaps this is yours…? ~
If you’re with me still, here’s a book giveaway, yours for the commenting and according to random.com. Monday, June 13, 9:00 in the morning, someone will win my 1984 edition of Classics to Read Aloud to Your Children by William F. Russell. There are selections from Shakespeare, Twain, Dickens, O. Henry, Aesop, Homer, Longfellow, Kipling, Tennyson and many more. All you have to do is comment but, if you’re so inclined, please tell me what you’re reading; inquiring minds want to know.
If you’d like a second entry, tell others about this giveaway, especially those with children or grands. Reading to children is such a lovely way to encourage a love of reading and, let’s face it, when you love to read, you’re always surrounded by friends.
Blessings ~ reading ~ listening ~ books ~
Yours, for the love of reading,
Sandra
Share
Pin
Email
« Susan Branch and Gladys Taber
Counting Time in Heartbeats »