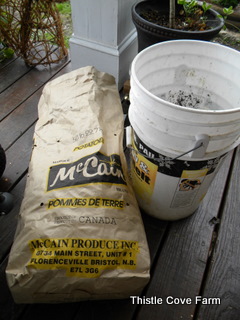 ~ Canadian organic seed potatoes ~
Do you like potatoes? Do you like Yukon Gold Potatoes? In the hopes the sun will shine again, I’ve readied twenty-five pounds of Yukon Gold seed potatoes for planting. Actually, the bag was fifty pounds but I shared with Daniel, our neighbor and “adopted” son. That’s how we treat him and that’s how we think of him. Daniel does the “heavy” work in our garden; the plowing, discing, tilling, etc. and he and I share the rest of the work. When I’m whining complaining talking to Dave about not being able to keep up with Daniel, Dave asks me, “How old is Daniel?” I say, “38”. Dave asks, “How old are you?” “58,” I grimace. Not because of my age, I love my age and will, gratefully, take any birthday anyone else doesn’t want. I grimace because while it’s true, almost, I can do anything I used to be able to do, it’s also true it takes me about three or four times as long to do it, on a good day. sigh 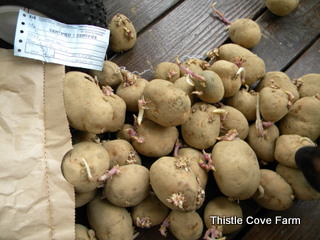 ~ seed potatoes with eyes ~
In USA, or UUUUsssaaaa, said long and drawn out, as we’re called in some parts of the world we’ve traveled, Lewis Grizzard, deceased as of 1994, was a prolific Southern writer. Every time I see a potato, I think of his book, Don’t Bend Over in the Garden, Granny, You Know Them Taters Got Eyes.  He was as Southern as Southern could be and, some time prior to getting started as a writer, he was called “too southern”. He replied “Why, that’s an oxymoron. There’s no such thing as being too southern.”  Amen!
I’m a “southern by birth but a Virginian by the grace of God” and, for most of my life, have lived south of the Mason Dixon line. It always, but always, amuses me when Maryland and West Virginia both claim to be southern states. Last I heard, both of them managed to get themselves counted with the Yankees, north of the Mason Dixon line, during the Late Great Unpleasantness or, as some called it, the War of Northern Aggression. Probably, I should stop here as Dave is a Yankee, born in Ohio and raised in West Virginia, however, I don’t hold it against him as he had the influence of a fine Southern Gentleman, his Grandfather.
Anyway, Mr. Grizzard was a humorist and always makes me laugh although it helps I’ve a childish sense of humor. I find it unfortunate some people have to laugh at the expense of others or by using foul language, etc. I’m grateful I can find pleasure, joy and laughter in simple things. Least you think I’m a total cretin, I have done some interesting things. A few years ago, I taught in Russia and, prior to leaving Moscow, I reported to the Ambassador’s Aid of the US Embassy Moscow. I mean, I do know which fork to use, for goodness sakes! -LOL-
And what does any of that have to do with planting potatoes??? Geeze Louise, I sure can stroll and wander! 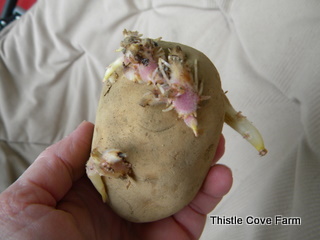 ~ potato with several eyes ~
Potatoes must be cut into sections and each section needs to have an eye. In the best case, the potatoes should have a few days to dry out a bit before planting them into the ground. 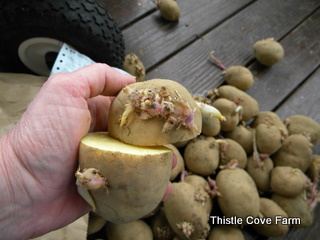 ~ cutting potatoes ~
This potato will be cut into several pieces, at least three and each section needs to have an eye in order for the plant to grow. We’ve had rain, rain and more rain so no photos of planting potatoes; those come, hopefully, later.
Gorta Mor happened well after my Daddy’s Mothers’ people left Ireland, about one hundred years after,  but all over the world, people still talk about The Irish Potato Famine where one million people died and another million left the country. About one-third of the Irish population was dependent upon the potato and when Phytophthora infestans, an oomycete, caused late blight or potato blight, people starved to death. Ireland’s population dropped between twenty and twenty-five percent; it boggles the mind!
Yes, as a matter of fact I do sleep like a baby…when I remember to take my aspirin or Ibuprofen, my “recreational drugs of choice” -LOL-. Yes, I do work hard and, yes, I do love my life, including the work. Someone said success is living the life you want to live so that means I’m among the most successful people I know. Thank God! It gives me enormous pleasure to be responsible for my own food, from seed to table, and it pleases me to stock a pantry full of canned goods, dried goods, frozen goods as well as the cellar full of root vegetables. It pleases me greatly to put a meal on the table, to serve loved ones, with food that I know is pure and clean.
Dave and I are having a picnic next month and the guest list is, currently, around 80. It’s a “bring a dish to share” affair and I’m sure the food will be fabulous! We’ll have lots of home made food, we’ll churn ice cream, pitch horse shoes, drink sweet ice tea…another Southern tradition!…and make memories against the cold winds of winter. Food isn’t just for the body, it’s for the soul and we’re doing our best to “live large” in the midst of “new normals”. Yes, it’s difficult but, glory be to God, it’s SO worth the effort. You’re invited; are you coming and what will you bring?
Blessings ~ seeds ~ plants ~ food ~ gardens ~ pantry ~ freezers ~ refrigerators ~ cellar ~
Share
Pin
Email
« Farm Days
Sabbath Keeping »