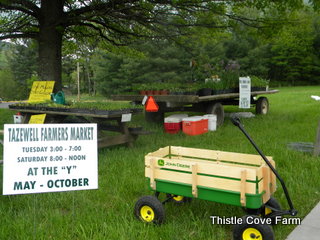 Tazewell County, Virginia is a funny place. It seems to me everyone is in competition with everyone else including each other. While competition should be a good thing, most generally around here, it’s not so good. There’s a fair bit of carping, hissing, complaining and downright rancor over the latest farmers’ market.
Years ago, I helped start the first Tazewell farmers market and then was told I couldn’t be a part of it because I didn’t sell food. My farm products are in the way of fleeces, roving, yarn, finished goods but the “powers that became” said, “no, it has to be food”. Then, a few years into the market, the manager came to me and said, “we’d like you to come and demonstrate because you’d draw a crowd.” I asked, “will I then be able to be a vendor?” She said, “oh no, you don’t sell food.” Needless to say, I declined her kind offer. 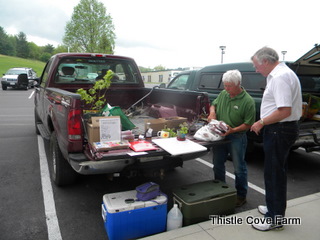 ~ Anderson Grass Fed Beef ~
A couple of weeks ago, the new Tazewell Farmers’ Market Manager called and said the YMCA was hosting the new farmers’ market and asked if I’d be a part of the new market. I said I didn’t sell food and he said, “I know and look, you probably won’t make a lot of money, if any money, but you’d be a draw and crowd pleaser for us and we’d sure appreciate it.” WOW!  You bet I said, “yes!” All of us want to be appreciated and when someone kindly asks, especially without letting on they think we’re too stupid to know smoke is being blown up our skirt, I think we should say yes, whenever possible, and help out. Not that Bill came across thataway; he was, and is, quite pleasant and serious about making the market work. 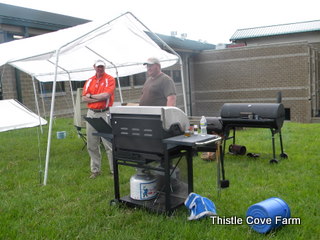 ~ free cookout! ~
To open the first market day, a free cookout was provided for both vendors and visitors. Additionally, folks working out at the YMCA could grab and fill a plate while a band played and a great time was had by all despite the downpour and sudden chill in temps. The two gents above, Rob, a YMCA orange shirted employee, and John, our extension agent, work the grills. 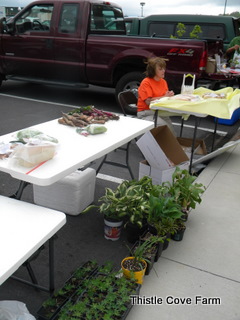 It’s early days, seasonally speaking, but some farmers have hoops and they already have beets and new potatoes while others sell baked goods and potted plants, including flowers, herbs and vegs. 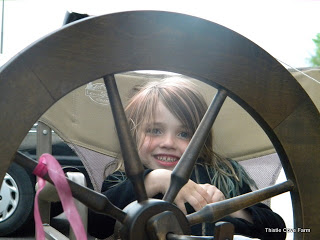 ~ Ginny ~
Successful farmers markets have a lot in common; they allow vendors to sell food, hand produced crafts, have music and crafts for the kidlets, they advertise locally and regionally, have websites and blogs. On Saturday, our farmers market had the set-up for children to make potted plants for Mother’s Day and both days the market has been open, musician’s have played a variety of tunes; excellent draws all!
I set up the first day, last Tuesday, and my neighbor on one side was Anderson Grass Fed Beef and granddaughter, Ginny. They have a farm in Bland County, a neighboring county, and were selling beef and other farm products. Ginny and I became BFF’s and hung out most of the afternoon and when she wanted to spin she crawled onto my lap and lessons began. 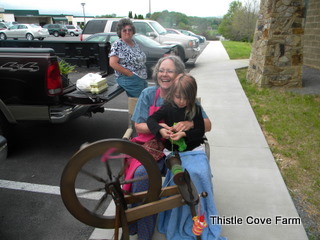 ~ spinning Ginny ~
And this, photo above, is why I spend money to lose money…for the love of the children. She had a great time, as did I, and we spun a lot of yarn. Ginny also made her singing debut when I held her on the musician’s stool and she sang “Jesus Loves Me” for the crowd. Could we have had a better time? I think not. BTW, Nancy is standing behind us and she sold home made sorghum molasses, free range eggs and rhubarb. I was her best customer -grin-.
If you’ve not yet noticed, you will soon, food prices in grocery stores are UP, UP, UP! and going to continue to climb due to oil reaching $100 a barrel. It’s costing the earth, literally, to transport food from Point A to Point Z and the consumer has to pay the price. If you’re not shopping at your farmers’ market, you should start. Prices are reasonable, you’re cutting out the middle man and, if you’ve allergies, eating honey made locally is said to lesson allergies. If you’re not sure where your markets are located, check out Local Harvest; they have a fabulous listing of nationwide markets and there’s sure to be one somewhat close. We have several markets within a fifty mile radius and my favorite, after the new Tazewell market of course -smile-, is the Abingdon Farmers’ Market.
Oh, and as to the recent unpleasantness alluded to earlier, the former market manager has eaten sour grapes. Apparently, she’s not in favor of the new location nor new manager and has, allegedly, threatened to do all possible to ruin the new market…sigh and chortle…as if she has that much power! Hey you, grow up, why doncha? In the words of Rodney King, “why can’t we just all get along?”
Blessings ~ farmers ~ markets ~ food ~ crafts ~ song ~ children ~
Share
Pin
Email
« Sabbath Keeping
Tidbit Tuesday – Plain and Simple »