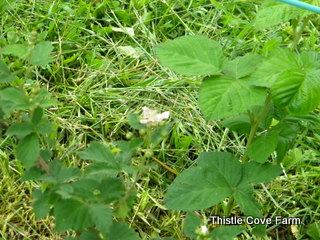 ~ thornless blackberry bloom ~
In the heart of Appalachia, indeed all of the USA East Coast, we have a saying: Blackberry Winter. It’s that time of May, around the 10th, or second weekend, or Mother’s Day, when the blackberry bushes bloom. It’s also when we experience Blackberry Winter, the inverse of Indian Summer, and temperatures plummet to just above freezing. There have been times when we’ve had a frost as late as the last weekend of May and I’ve had to re-plant the garden. Grrrrr…a loss of both time, labor and money. 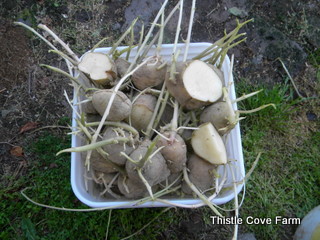 ~ white potatoes from the cellar ~
We’re in the heart of Blackberry Winter now and the night time temps have gotten in the upper 30 degrees F. Chilly but great sleeping weather! The garden has two one hundred foot rows of white potatoes, Kennebec in one row and possibly Kennebec in the other row. I used potatoes we didn’t quite get around to eating in the second row and, while they might be Kennebec, I couldn’t say for sure. There’s still twenty-five pounds of Yukon Gold potatoes and five pounds of fingerlings to plant…IF the rain ever slows down. All this talk about potatoes reminds me of Al Gore, whom I never much trusted.
Planting potatoes is fairly easy and the rewards are prodigious. I might not get as many with my older seed from the cellar but they will still produce. And, considering they aren’t good for eating now, some is better than being thrown away. 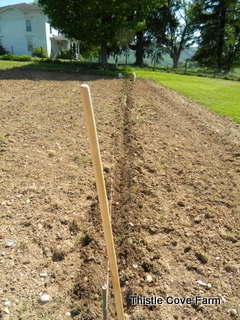 ~ a, somewhat, straight potato row ~
Back to Gore for a moment, if he was penniless and pushing global warming, his words would carry more weight but anyone who stands to become a billionaire should the global warming agenda be pushed through, then HA! Heck, if women, indeed, his own wife, can’t trust him, then why should I? Yet I know people who still worship at the Church of Al Gore and Global Warming. This is due, in large part, IMHO, because the media continues to ignore Gore’s financial tie$$$ to global warming.

Oh wait. That agenda has been pushed through and foisted upon us by our very own elected officials ejits officials, the US House of Representatives…and I use the term very loosely. So what does this mean to you and I? It means our energy bill will increase, depending upon your perspective, to a great degree, a few hundred dollars, and some say to a ginormous degree, more than a thousand dollars. My perspective is any increase is a ginormous degree especially since the worms lied to us. But, what can one expect: the speed of the leader is the speed of the team.

I’m reminded of the kindly academician in The Lion, the Witch and the Wardrobe who said, “What on earth are they teaching young people in school these days?” Certainly not to think for themselves! A lot of people come to mind are folks who act as though they think there’s a free lunch and a chicken in every pot. Some of them, it seems to me, seem to think there’s a get rich quick scheme that everyone, but them, knows about and they sit around waiting to be handed their bucket of gold. This, while speaking in sound bites and talking about tolerance which their actions decry.
Ahem. Excuse me. Would one of you, please, help me down from my soap box? To get back to the garden…twenty-nine tomato plants wait to be sunk into the ground. They range from Evergreen, an heirloom, that stays green and is for frying, to Green Grape, a sweet, juicy green tomato to those tried and true favorites, Big Boy, Early Girl and Better Boy. 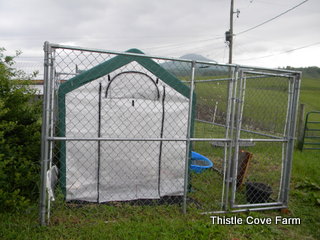 ~ Greenhouse in a Box ~
Then, there are the peas, Alaska and snow, a bit late for them but when planted in the shade might produce yet. The Alaska pea is the earliest of all and at 58 days fulfills the gardens promise early. The gourds, pumpkins, watermelons, cantaloupes, cucumbers, beans and flowers are all started and doing well in a wet, but not sunny, greenhouse. I start a lot of sunflowers from seed and love, love, love sunflowers. They are so beautifully cheerful and provide food for humans and animals; a total win-win. 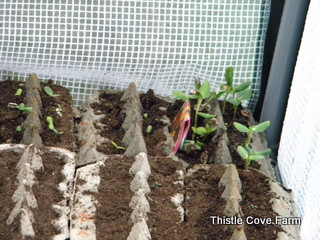 ~ sunflower seeds ~
The Shelter Logic “Greenhouse in a Box” was purchased from Tractor Supply and cost $149, no sales tax since I have a farm account with them. It’s 6×6.5×8 and was placed inside the dog kennel to keep it safe from puppy harm. I don’t have tables but the arrangement I do have works just fine. As you can see, I need to water again and I also have a lot more seeds to get started; I’ll have to drag a table into the greenhouse in order to have a bit more seed starting room.

Might as well get some seeds started; it’s raining, again, and I can’t get into the garden. Perhaps this weekend will bring us sunshine; I think the low pressure system is supposed to move elsewhere. One can hope.