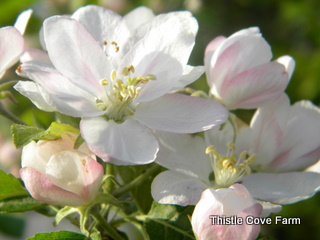 The apple tree is in full bloom and bees are busy with pollination; the morning is beautiful but only after a rough start.

Photos are going to get a bit graphic so, if you’re squeamish, better close out the page now. 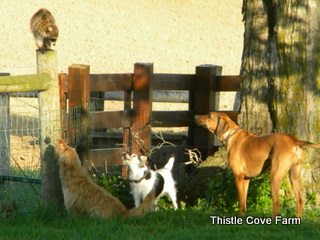 Early this morning, as usual, dogs and I were in the sunroom, listening to Alistair Begg while I was working on some pillow case embroidery, when Sam, quite suddenly, goes on alert. He starts baying and barking and I jump to the door to see what’s going on. I thought I saw the squirrel so opened the door and all three dogs barreled outside. The squirrel runs along the other side of the fence line and always away from the dogs but, too late, I see a raccoon, running alongside the fence. The ‘coon climbed the fence post and the dogs got into place. 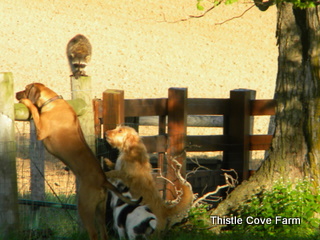 ~ Sadie, too close for my comfort ~

We live in a very rural area and guns are a fact of life. Unfortunately, guns couldn’t be used because the dogs were too excited to be called off and, truthfully, I wanted Sadie and Sam to understand their role. Abbie is a veteran ground hog killer and she and Shadow were a good working team. Abbie would tease while Shaddie would go in for the kill bite to the back of the neck. Never were either one of them injured, much, and they both learned valuable lessons about team work. 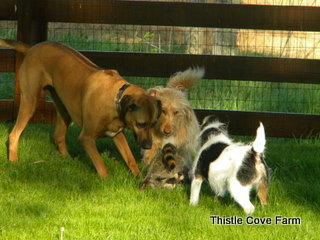 Please understand; I do not enjoy killing nor watching something being killed…but…I also do not enjoy having to put down one of my animals because of rabies. There’s a neighbor, up the valley, who had to have rabies shots when he was a lad. This was back when said shots were injected into the stomach and were Very Painful. Now, said injections are into the buttocks but no less painful, so I’m told.

Generally, nocturnal animals are just that; they sleep during the day and travel at night. Raccoons are nocturnal and it’s, fairly, unusual to see them during the day. Unless they are sick and I never, ever take chances; not with my animals’ lives nor with my own. 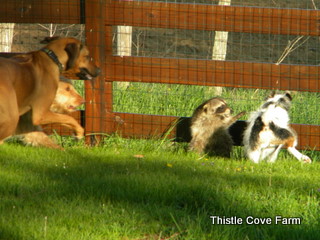 Sam took the lead but it was Abbie who taught Sam and Sadie how to attack. Sadie is a Rhodesian Ridgeback and used for lion hunting, guarding home and farm in South Africa. Sam is part Basset Hound and has hunting genes coursing through his blood as well. All three dogs are encouraged to protect “theirs” and that includes farm, livestock and humans. If it takes the life of a raccoon to help them learn, so be it especially when the raccoon is acting outside his normal. 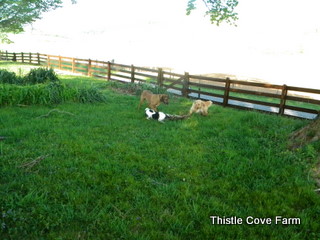 Like I said, I hate killing, both doing and watching, but I’ve always figured someone who wouldn’t protect their home and family isn’t worth their salt. I’m not proud of killing the raccoon but did what I had to do in order to finish the job. I couldn’t use a gun because I didn’t want to shoot one of the dogs so I used a walking stick. Not pretty but needful. The health department is coming to get the body and it will be tested for rabies. That’s what all this was about; killing the ‘coon so it could be tested for rabies. The rabies test must be done of brain tissue and that means the death of the ‘coon regardless.

Now, before you judge me, please consider a ground hog hole could cause the life of one of my horses or sheep. Should an animal step into a hole and break their leg, that means the animal has to be put down. Frankly, there’s no consideration a ground hog is going to give their life and not one of my animals. As to the ‘coon; he should have been doing what he does…at night. A nocturnal animal, wandering around during the day, almost always means something isn’t quite right. I’m not chancing rabies, either myself or my dogs, and if that means the ‘coons life…so be it. I try to be a good steward of what God has entrusted me and, last I looked, He’s not entrusted me with ‘coons or ground hogs. With the first breath, we’re all terminal; it’s just a matter of when and not if but I am sorry for the ‘coon.

I need to go; I think I hear the health department truck.