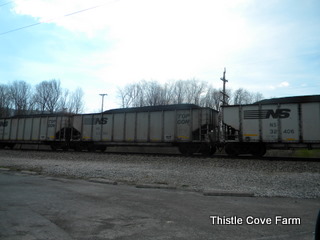 ~ coal trains ~
If you’re reading this on a computer that’s operated by electricity, in a room that has an electric light bulb, please, thank a coal miner.
It always amuses me when folks start in on coal miners and the mining industry. Generally, those whiny folks are using computers fired by electricity, living in houses fired by electricity, working in offices fired by electricity, driving cars manufactured by electricity…all of which are because of coal, well, you get the idea.
Like all the gasoline stations that “proudly” state, “Ten percent ethanol added”.
Big Whoop.
What that translates into is more profits for the petroleum companies CEO’s, Board members and shareholders and worse gasoline mileage for us. All ethanol does is s.t.r.e.t.c.h the gasoline, making it less mileage efficient so we get fewer miles per gallon of gas.
Okay, I’m not so good with the scientific jargon but I’m pretty good at counting and what I count best is money. We’re spending more money and receiving less for it.
So what’s new?
If you know anything about Appalachia, you know we’re coal country. A good portion of the Appalachian states have coal mines and coal miners. On Spike Television, from the same people who brought us Deadliest Catch and Ice Road Truckers comes COAL. It was filmed about fifty miles from us, over the VA/WV state line, in the next county, McDowell, and we’ve been watching. I have a healthy respect for anyone who earns their money the old fashioned way, by sheer physical labor but especially coal miners.
After all, I am a coal miner’s daughter. Daddy’s people came to the USA in the mid 1600’s from the coal mines of the old country. I well remember Granddaddy coming home, black save the whites of his eyes and stripping off the layers of his coal dusted work clothes. Later, Uncle Clarence came home the same way and then Daddy. At some point, Daddy decided the coal miner’s life wasn’t the life for either he nor his family and he packed us up and moved us to Richmond.
Coal is the lifeblood of Appalachia; at least, our part of Appalachia. It’s one of the most dangerous jobs in the world, taking place in one of the darkest places in the world – middle earth. There is nothing, nothing, like the inside of a coal mine. This I know from listening to my menfolk, and others, talk of their job. It was always considered bad luck for a woman to enter a mine and, to this day, out of respect, I’ve never been inside of a mine. I have family members sealed in mines because there was an explosion and the mines caved in, leaving no way to get the miners out so they buried them.
Did you know canaries were the early warning system for methane or carbon monoxide gas? Miners carried canaries into the mines with them and if the bird died, the men knew to head for sunlight and the surface… fast! The last canary carried into an English mine just died from old age in the 1980’s; he was one of the blessed ones.

COAL shows miners at their best and at their worst working for Cobalt Coal Company, a company traded in both the USA, CCCXF.PK, and in Canada, CBT-V. The show premiered in Premier, WV where some friends live and has been the biggest thing to happen to that community since the train laid tracks.
So, to repeat myself…if you’ve got mod cons like electricity, automobiles, trucks, public transportation; heck, virtually every part of our lives are because of COAL, thank a coal miner. It’s a hard, tough, dirty job and I thank God for coal miners. Bless ’em, Lord, and please keep them safe.
Watch the show and let me know what you think.
Blessings ~ God’s resources ~ coal miners ~ trains ~ coal ~