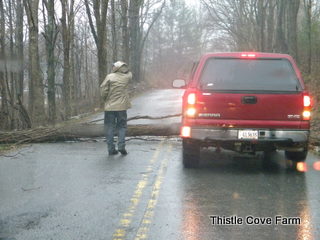 For a good part of the way out of the Cove, it’s two lane, unmarked, roads. This road, Pounding Mill Road, is marked and, as you can see, driving is hampered by a tree across the road. This is the shortest way home, the next shortest way means turning around…difficult to do on a road this narrow…heading back to Rt. 460 and then turning east to head to Tazewell town and then home or, turning west, and going on a narrower, unmarked, dirt road. It’s just as likely, perhaps more so, trees would be across the dirt road as well. Hmmm. 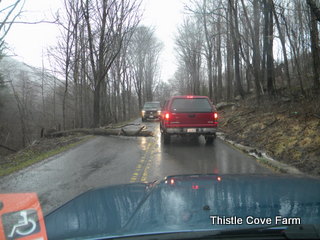 It was easier to get out in the pouring rain and help break up, then move the tree just enough so one lane of traffic was clear. See the oncoming car? The driver wanted to stop, waaaaay back, but I motioned the driver to come closer. As soon as the automobile was close enough for me to talk to the driver, I saw it was a woman and asked, “Do you have a man in that car with you?” She looked startled and said, “nooooo…?” I told her, “well, you’ll have to do. We need to move this tree so we can all get to where we’re going.” Startled is not the adjective I’d use for the look on her face this time -grin- but she jumped out of her car, ready to assist. The two men in the car ahead of me, that woman and myself broke up the tree enough so we could pull it out of one lane of road. As we’re readying to break up the tree, one of the men looked at me and said, “So, Cove Gal, how’s Dave doing?” I must have looked as startled as the other woman! “Gaining strength but it’s slow going and daily”, I told him. He laughed and said, “Mr. Harrison is in the car and we’d heard the news.” He and Mr. Harrison are the gents who keep our furnace and heating system in working order; it was nice to work alongside folks I know. 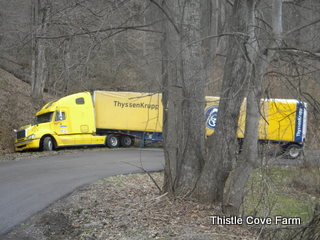 On the other side of this mountain, this tractor trailer driver found out dispatch doesn’t always know best. I felt sorry for him. Cell phone coverage is spotty, at best, and in the short time I was there, his phone connection broke several times. To say he was exasperated is putting it mildly. Eventually, within three hours, a tow truck came and rescued him but he and dispatch were having trouble communicating. The driver asked me, “what’s the nearest town?” Now, that’s a trick question. Around here, towns are few and far between but we do have plenty of wide spots. I told him, “tell your dispatcher you’re about four miles from the Pounding Mill WalMart.” The guy looked at me like I’d struck crazy. “Pounding Mill?” But, he told her and her response was about the same. I just grinned and left them to it; I can only offer help, can’t make them take it. The truck was, probably, in okay shape; it looked like he’d driven onto the soft shoulder and it gave way. Good thing it was on the ditch side of the road and not the cliff side. 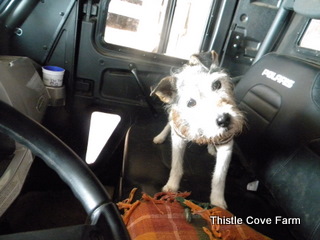 Beloved Abbie, like so many most at Thistle Cove Farm, has some years on her. As a foundling, she came here in 1998 and was full grown then so she’s upwards of fourteen years. That’s close to 100 in our years and she’s beginning to slow, just a tad. I thought she’d had a stroke but, after taking her to a vet who specializes in Jack Russell’s, I found Abbie didn’t have a stroke but rather vestibular disorder. Nasty stuff that and means she suffers from having her world dizzy and imbalanced. She tells me when she needs to go up or down steps and I have to make sure not to disorient her. The two times I have turned her too quickly, she has to lay on the floor and flip 360 degrees to right her inner ear and restore balance to her world. It’s painful to watch and I can only imagine the disorientation inside her little head and body.

She’s eating well and moving nicely; was able to chase a rabbit yesterday and in a, fairly, straight line. She’s on pain meds, to help her sleep and cope, and on antibiotics as, sometimes, they seem to help. Dr. Peggy, the vet, also suffers from vestibular disorder and was quite sympathetic; she even called this morning at 8 a.m. to see how Abbie is faring. 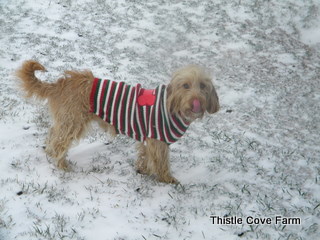 ~ Sam, either licking his chops or warming his nose ~

Sam went to the vet also and he has a very nasty ear infection. I’ve been trying to clear up this ear infection for a very long time; hopefully, we’ve got the right mix of meds to get the job done this time. 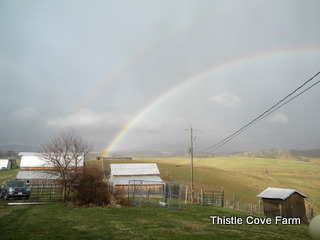 Can you see the double rainbow? Dolly Parton said, “if you want to see the rainbow, you have to put up with the rain.” She’s right, you know. For two weeks, or more, it’s either rained or snowed each and every day. Lawz! but I am glad to see the rainbows!

Our GP, God bless Dr. Steve!, called after 8 p.m. tonight. He wanted to let us know he’d already received the results of the CT scan Dave had earlier today. The tumor has shrunk a bit more and we’ll take it. Yes, Lord, we’d still like that miracle of full recovery please, but, in the meantime, we’ll take this small victory and thank you, Lord, thank you so very much.

Here’s hoping rainbows for you as well. Rainbows and unexpected gifts.