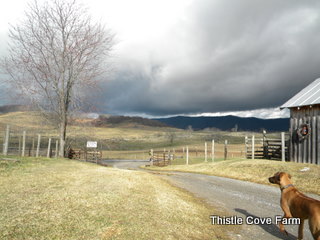 There’s more than one thing fabulous about living in the Cove but, in the above photo, I love how the clouds threaten the mountain with darkness. Yesterday, it never rained but, all day long, clouds would sweep over the valley, from every direction, and then sweep out again. I had this visual of the Archangel Michael, wielding a broom, sweeping before him from one end to the other! When we went to the barn, a piece of black plastic caught Sadie’s attention; I believe she thought it was another animal and loved how she went quite still, surveying the matter. Rhodesian Ridgebacks are both sight and scent hounds and originally used for hunting lions, herding cattle and guarding farmsteads. Sadie is our second Ridge, Shaddie was the first and if I were any younger, I’d breed Ridgebacks. They are magnificent dogs, especially when you buy from a professional breeder who is concerned about conformation and health. 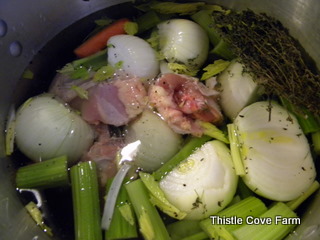 As Dave and I settle into a new normal routine, Dave’s primary jobs are to eat, sleep, exercise; as much of the first two as possible with a dash of the latter every other day. My job is everything else and let me tell you rightly, it’s not easy but, with God’s help, some of it is getting done. This past week I cooked some chicken stock. If you’ve never made stock before, it’s easy but, like everything good, just takes time. I use a five gallon stock pot and fill it with a pound of celery, a pound of carrots, a bag of onions, a bunch of thyme, fresh cracked sea salt, fresh cracked pepper and two chickens which I found on a good sale. The vegetables are rough chopped because they’ll cook down anyway. The chickens are cut up and the breast meat is wrapped in wax paper then in freezer bags. They will be used later for wiener schnitzel while the hearts, gizzards and liver were fried up for the dogs. If the nasty bits are used in the stock, it makes the stock sharpish and not as good tasting.

The pot is brought to a boil and then cut way back to simmer. And simmer and simmer and simmer. That’s the first day. It’s left to cool overnight and the next morning the cooking process begins anew. There are those who shy away from leaving the pot out overnight but it’s always worked for me; then again, I only make huge amounts of chicken stock in the colder winter months and our house is kept cool. The pot is brought to a boil and simmered, each day, for three or four days; enough so the stock boils down and becomes extremely concentrated. By the time it’s ready to use, the stock is quick thick and rich. Tomorrow, I’m making chicken noodle soup and, probably, some corn bread and will take it around to neighbors to be left on car hoods. Then, I’ll honk the horn and they can come out and get their lunch. Influenza has been sweeping through southwest Virginia, especially our county and folks have been terribly sick. I figure a batch of chicken noodle soup won’t hurt and might actually help. Dave and I will keep some for ourselves as I’m trying to help him gain some of the almost thirty pounds he lost in hospital. We counted it up tonight and he’s spent some nineteen nights in hospital and it’s taken a drastic toll on him. Yep, chicken noodle soup will help, a lot.

As I’m typing, some beef bones are roasting in the oven. It was hard as the dickens to find beef bones but, finally, I found a grocery that carried them and cleaned them out of a dozen bags. Beef bones are inexpensive, about $2 for two pounds and, yep, they do make a difference. The bones are put into a roasting pan, sometimes with celery, carrots, onions, a few bay leafs, cracked salt and cracked pepper, and roasted in a slow oven. The bones will sit in a two hundred degree oven all night and, in the morning, I’ll see if they are done. And, truthfully? I forgot to put the vegs in with the bones so the bones are roasting solo tonight; tomorrow, I’ll start another batch of bones, add the vegetables, etc. and, in the end, all will be well.

Dave has been hankering for some beef barley soup and the bones will be used to make that soup but also I’ll can or freeze some beef stock. When I begin to make the soup, I’ll spoon and scrape out the bone marrow and that will make the soup quite concentrated and nutritious. The dogs will, eventually, get the bones to chew so everyone ends up happy, happy. 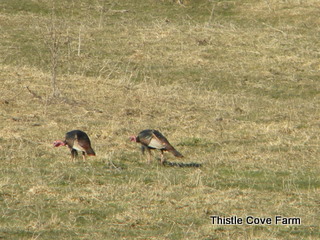 It’s spring gobbler season so these fellers are in danger of ending up on someone’s supper plate. If you’ve never tasted wild turkey…please note I said tasted and not drank -smile-…you’ve missed out. Nothing, nothing can compare with the flavor of wild game, especially turkey. Those poor, pale imitations raised in squalor have meat that makes one’s teeth stick together and the flavor is pallid, at best. Did you know Ben Franklin wanted the wild turkey to be the new nation’s symbol of freedom? He felt eagles to be creatures of laziness and sloth while turkeys were “birds of Courage“. I’ve seen turkeys alight in tree tops thirty feet from the earth and I’ve seen eagles soar over the valley; both are respectable and beautiful. 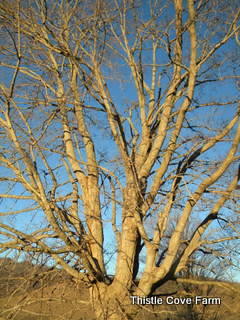 So, can you tell when I’m exhausted? My writing gets down homey -smile-. Words like hankering seek their way into the post and I’m happy to let them. In closing, some questions and final comments.

If you’re following Thistle Cove Farm and I’m not following you, please let me know. I get so confused with that Follower thing, found at the bottom of my blog, and I’m afraid I might have missed some kind folks. That just won’t do! So, let me know and I’ll come visit you and follow.

Also, does anyone have any idea where to fine, in alpha order, the folks who are following you?

That’s about it; it’s almost 9 p.m. and my tired bones are weary and wanting to make their way to bed. This new normal is, just about, killing me and it’s a daily struggle to keep up. Some days I don’t keep up, I just do what I can and then stop. I suppose it’s a lot like farming; the work is always there and waiting. It’s a wise woman or man who knows when to stop, smell the flowers and take stock of life. Yes, life is so daily but it’s also so wonderful, especially when I get out of my own way and look and listen.