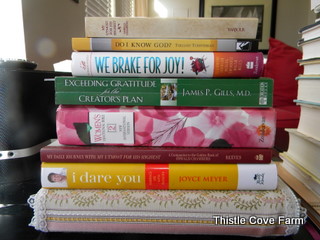 Are you a reader? Do these words ring true? “Hi, my name is _____ and I’m a reader.” I think it’s fair to say only readers understand other readers. The need to have reading material at hand, a stack currently being read but also to be read, along with magazines makes me a happy, satisfied and content camper. Thank God for thrift stores and books to be had for pennies on the dollar; too bad magazines aren’t as thriftly hand. Generally, I tend to pay full price, minus ten percent, at BAM because that’s where I can find what I like to read.

The stack of books above are, from bottom up, the KJV Bible. I have and do read other versions but the KJV is my favorite and the one I find most comforting as well as the most difficult to read and understand. It stretches me, makes me think and ponder which are both mighty good things.

Joyce Meyer is a prolific author and i dare you admonishes you to Embrace Life With Passion. That’s something I’ve always strived to do although I’ve not always known what it was called. From the time I was a toddler, I’ve run toward life, full tilt boogey, arms open wide and skinned knees to prove it. Yeah, I’ve had my share…and then some…of hurts, misfortunes and even a tragedy or three but, through it all, God has provided. Even when I had no clue, even when I was running without acknowledging Him, He has always provided. Now that I’m older, I can see where my life has been spent running with and toward HIM even when I thought I was running alone. Do you understand?

My Daily Journey With My Utmost For His Highest is a companion to Oswald Chamber‘s classic.


The Women’s Devotional Bible 2 is the New International Version and an enjoyable read. It’s not a tough a read as the KJV but still enjoyable.

Exceeding Gratitude for the Creator’s Plan by James P. Gills, M.D. is written from an eye doctor’s point of view and is extraordinary. God blessed me with an attitude of gratitude but I can always use a boost. Dr. Gills writes on how to have a  more satisfying life,a more useful life, simply a better life by learning how a loving Creator has had your picture on His refrigerator since before time began! Okay, maybe God doesn’t have a refrigerator but He has had you on His mind since before He began time. Now that’s an awesome thought and I rarely use the word awesome!


We Brake for Joy is a devotional written by Patsy Clairmont, Thelma Wells, Luci Swindoll, Marilyn Meberg, Barbara Johnson and Sheila Walsh. If you’re not familiar with these women, you should be.

Tullian Tchividjian, grandson of Billy Graham, wrote Do I Know God? I love the subtitle, Finding Certainty in Life’s Most Important Relationship. That says everything that needs saying.

Is any bookshelf complete without Oswald Chambers My Utmost for His Highest? I think not. 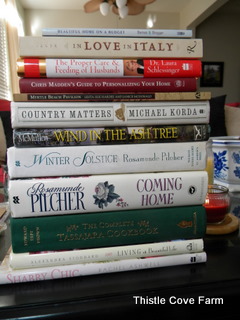 Decades ago, Rachel Ashwell wrote Shabby Chic and spawned an entire industry. Shabby Chic is still a beloved favorite, well thumbed by folks who like the cozy, put your feet up style of cottage.

Another beloved favorite for decades is Alexandra Stoddard. Living a Beautiful Life is my idea of a cup of liquid comfort: hot, sweet, milky tea in hard cover. Some of her more recent books show she has a bent toward Eastern philosophy and that’s not in keeping with my belief of Christ and His Father’s plan of salvation but it’s okay, I still read and enjoy her writings.

Do you remember a television movie staring Angela Lansbury called The Shell Seekers? I’m drawn to those types of movies: languid, a great story with wonderful actors and scenic location. Some of my favorites have been The Whales of August, The Big Fish, Harold and Maude, Trip to Bountiful, or Simon Birch; have you seen any of those? Anyway, back to Rosamunde Pilcher; a Scots woman who writes lyrical, well woven stories of people and how, essentially, the six degrees of separation come into play. Of course, she was writing well before Six Degrees of Separation but the idea is the same.

Wind in the Ash Tree is by Jeanine McMullen and I’ve lost count of how many times I’ve read this and her other books. She, an Australian, writes of buying a small country holding in Wales and her efforts at taming that small farm in the Welch countryside. No matter how many times I read this, or one of her other two books, I still laugh like a crazy woman and cry with the same abandon. Anyone who has farmed, ranched or had livestock will know, deep inside that place of knowing, what it took for her to follow her heart.

Michael Korda wrote Country Matters, his story of finding, buying and moving to an established, but decrepit, farm in a Duchess County, NY community of families with deep roots. He even provided the drawings that adorn the book, cover to cover.

Myrtle Beach Pavilion by Lesta Sue Hardee and Janice McDonald recounts the hey days of Myrtle Beach and, more specifically, the Beach Pavillion. Lesta Sue is the sister of my name sake friend, Sandra K. Hardee, and I’ve known the sisters and their families for decades. Photos and writing bring back a day that will never be again as the Pavilion was torn down for “modern commerce”. Do you know how to Shag? And, no, I don’t mean the rude term used by the Brits, rather, the dance begun in Myrtle Beach, at the Pavilion, and now the state dance of South Carolina. I’ve always wanted to learn how to shag; it’s the coolest dance ever to the best music ever!

When we first came to Richmond, I found two little thrift store books to help me cozy up corporate housing. Chris Madden‘s Guide to Personalizing Your Home and Beautiful Home on a Budget by Barnes and Brogger have given me a few pointers on how to turn this townhouse into our home.

Dr. Laura – love her or hate her, she’s a bright woman and, imo, on target more often than not. The Proper Care and Feeding of Husbands probably won’t set well with those of a feminist bent but I like the book.  Her premise is, men are simple creatures. They want, so Dave my husband, tells me to protect and provide for their women and family; some would add be a spiritual leader in the home as well. I like Dr. Laura although I don’t listen to her on the radio…does she still have a program? I don’t like listening to stupid callers belittle their husbands, talk rudely and, generally, act like they are sitting on a gold mine when, let’s face it, if it’s been used once, it’s second hand goods.

My last book by Monica Larner is In Love In Italy – a Traveler’s Guide to the Most Romantic Destinations in the Country of Amore. Dave and I have been to Italy but want to return and stay a while, put our feet up and breath deeply and long. We have high hopes and big dreams; God willing, we’ll get back to Italy again.

So, there you have what I’m reading, have read or will read; what’s on your bookshel?