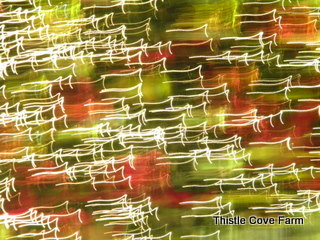 ~ Christmas lights on the fly ~
A couple of miles away, are three or four houses decked, and I mean decked, for the holidays. I’m not sure they could get even a candy cane amongst what they already have in their yards and on their houses. For decades, Richmond has been know for their “tacky lights” and “tacky lights tours“. It’s become a holiday tradition and buses sell out in hours and cars stream along behind the buses, filled with folks who weren’t able to buy a seat on the bus. There are even people hiring limousines and radio stations doing tours to make money for charity… I’m telling you, it’s wild! Matt Burgess, designer of the Tacky Lights website, grew up in Richmond and has fond memories of his family driving around to see which houses had the wackiest decorations. Now, his website pinpoints, by zip code, which neighborhoods around the nation, have the craziest decorations.

All that to say, the above photo was taken as I was hurtling driving, somewhat, sedately down Hungary Springs Road.  I told Dave we need to go back, preferably tonight, so he can see the lights as well. Unfortunately, he’s not as taken with “yard art” as am I. I’m all for whatever someone wants to put up in their yard as long as (a) they aren’t my neighbors and (b) it’s not disrespectful or sacrilegious. Heck, if it brings a smile to the face, that’s always a plus in this frosty ole world, wouldn’t you agree? I wouldn’t want them to be my neighbors because that would mean I’d live in the city. At this stage of life, I’m not willing to give up the farm for city living…Eva Gabor I’m not.

Yesterday, Dave and I had lunch at the Jefferson Hotel. It’s a lovely old property with loads of vintage appeal and they decorate beautifully at Christmas. 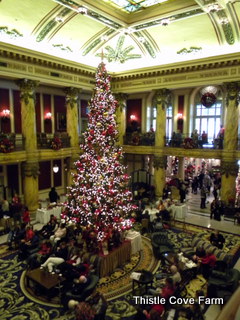 The reason I wanted to go to the Jefferson, however, wasn’t because of their beautiful decorations; it’s because of Offering. They are a group of musicians who play some of the most beautiful music I’ve ever heard. The first time I heard them was at Positive Vibe Cafe and they blew me away. Within seconds of hearing their first song, I could feel myself relaxing, becoming calmer and more peaceful. 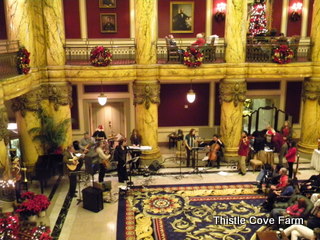 For more than a decade, this non-profit band has been supporting various other non-profits by playing their brand of grace, peace and love. They play at MCV’s Hospitality House, Positive Vibe Cafe, many churches and for venues they believe to be honoring through service. This Christmas season they are supporting Meals on Wheels through Central Virginia Foodbank.

Positive Vibe Cafe has been training folks with disabilities for more than a decade. They rotate Richmond chefs who train young folks in the ways of a superb kitchen and they turn out some of the best food I’ve ever eaten. If you’re ever in Richmond, make sure to eat there; everyone will benefit, including you, especially if Offering is playing.

On their blog, Jeanine Guidry recently posted something that grabbed my heart. She talked about “the ministry of showing up.” I wonder how many of us have missed a blessing because we didn’t show up? We were too busy or too tired or had an already over booked calendar or other reasons, a host of other reasons. How many of us have wonderful memories because we did show up? “Obedience is better than sacrifice” is what the Good Book tells us; if I ever get a tattoo…NOT likely!…that would be the one…

“Obedience is better than sacrifice.”