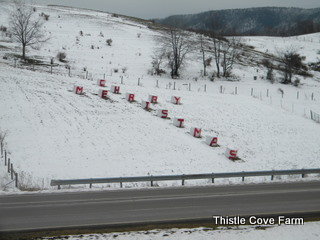 ~~ creative use of round hay bales ~

Wasn’t it wonderful, having Christmas fall on a Saturday? A lot of people got Christmas Eve, Christmas Day and the day after, Sunday, off. We stayed put and my family came to us. It was the first time in years Mother, Daddy, my brother and sister, one of her son’s, Dave and I were together and we spent the time like billionaires! We ate well, we laughed, shared a few gifts but the biggest gift was being together. Thank you God!

There are a few places you might enjoy visiting on the www. One place is Michael Youssef’s blog. Dr. Youssef was born under a social dictatorship, in Egypt, and now lives in Atlanta, GA. His perspective is unique; he’s not one of those who thinks he knows, he knows what he knows because he’s lived it and is more than willing to tell what it was like then and now. He’s a Bible believing, Bible teaching, Bible preaching man after God’s own heart; quite unlike so many “feel good” preachers that twist the Word to suit themselves and their budgets.

Pirate Christian Radio – “Finally, a real Christian radio station that is free from the scurvey plagues of pop-psychology, goofy fads, self help, pietism, liberalism, purpose-drivenism, emergent nonsense and the sissy girly Oprahi-fied spirituality that is being passed off as Christianity.”
Ah, come one…say what you really mean -smile-.

One more Christmas story for you…

A man named Bob May, depressed and brokenhearted, stared out his drafty apartment window into the chilling December night.

His 4-year-old daughter Barbara sat on his lap quietly sobbing. Bob’s wife, Evelyn, was dying of cancer. Little Barbara couldn’t understand why her mommy could never come home. Barbara looked up into her dad’s eyes and asked, “Why isn’t Mommy just like everybody else’s Mommy?” Bob’s jaw tightened and his eyes welled with tears. Her question brought waves of grief, but also of anger. It had been the story of Bob’s life. Life always had to be different for Bob.

Small when he was a kid, Bob was often bullied by other boys. He was too little at the time to compete in sports. He was often called names he’d rather not remember. From childhood, Bob was different and never seemed to fit in. Bob did complete college, married his loving wife and was grateful to get his job as a copywriter at Montgomery Ward during the Great Depression. Then he was blessed with his little girl. But it was all short-lived. Evelyn’s bout with cancer stripped them of all their savings and now Bob and his daughter were forced to live in a two-room apartment in the Chicago slums. Evelyn died just days before Christmas in 1938.

Bob struggled to give hope to his child, for whom he couldn’t even afford to buy a Christmas gift. But if he couldn’t buy a gift, he was determined to make one – a storybook! Bob had created an animal character in his own mind and told the animal’s story to little Barbara to give her comfort and hope. Again and again Bob told the story, embellishing it more with each telling. Who was the character? What was the story all about? The story Bob May created was his own autobiography in fable form. The character he created was a misfit outcast like he was. The name of the character? A little reindeer named Rudolph, with a big shiny nose. Bob finished the book just in time to give it to his little girl on Christmas Day. But the story doesn’t end there.

The general manager of Montgomery Ward caught wind of the little storybook and offered Bob May a nominal fee to purchase the rights to print the book. Wards went on to print,_ Rudolph, the Red-Nosed Reindeer_ and distribute it to children visiting Santa Claus in their stores. By 1946 Wards had printed and distributed more than six million copies of Rudolph. That same year, a major publisher wanted to purchase the rights from Wards to print an updated version of the book.

In an unprecedented gesture of kindness, the CEO of Wards returned all rights back to Bob May. The book became a best seller. Many toy and marketing deals followed and Bob May, now remarried with a growing family, became wealthy from the story he created to comfort his grieving daughter. But the story doesn’t end there either.

Bob’s brother-in-law, Johnny Marks, made a song adaptation to Rudolph. Though the song was turned down by such popular vocalists as Bing Crosby and Dinah Shore , it was recorded by the singing cowboy, Gene Autry.  “Rudolph, the Red-Nosed Reindeer” was released in 1949 and became a phenomenal success, selling more records than any other Christmas song, with the exception of “White Christmas.”

The gift of love that Bob May created for his daughter so long ago kept on returning back to bless him again and again. And Bob May learned the lesson, just like his dear friend Rudolph, that being different isn’t so bad. In fact, being different can be a blessing.  ~ author unknown to me ~
Personal note – we continue living in Richmond, Dave continues his treatments and the snow storm that slammered the East Coast barely brushed us here. We’ve been able to get to MCV with no problems and other than “coping” with electric heat, all’s well. We’re used to a warmer heat and electric heat is “the coldest heat” we’ve ever used. Brrrrrrr! We’ve touched base with several Richmond friends and I hope to visit some of them while we’re here. Depending upon how Dave is feeling, and his energy level, he may, or may not go with me on those visits. Your prayers are most welcomed, needed and appreciated and we’re believing God for healing in the form of treatments. Thank you, one and all.