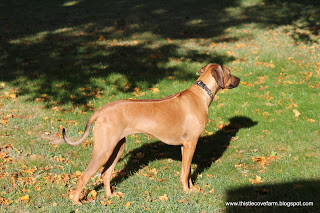 We’ve been so blessed with fabulous dogs and Sadie is no exception. She’ll be two in March so is still a puppy, albeit a rather large puppy, playing and romping with the abandon of an animal who knows she’s loved unconditionally. She’s trained, but not as well as she will be; she obeys, but not as good well as she eventually will. As an aside…earlier, Sadie was half in my lap when I was typing and I kept saying “good girl, good girl” and now you know I don’t multi-task as well as some -smile-. I’m rather laid back when it comes to training. Sadie won’t be a show dog, although you can see she has star potential, rather she’ll be a companion, protector of humans, home and farm. If she proves to be like Shaddie, her predecessor, she’ll be excellent at her jobs. 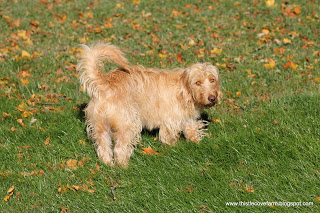 Very seriously, Sam takes his protection detail and is, generally, to be found wandering the perimeter, on guard. “Hey! You looking at ME?” 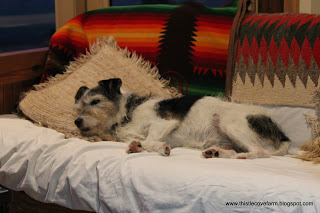 Abbie, now a senior citizen, watches from the couch. She’s earned her rest although she’s always first one out the door when it’s time to do chores.

It’s a rainy, cold, windy day and we’re keeping close to the fire. Chores are finished, for the morning anyway, and house cleaning is planned both because it’s needed and because it warms me. When I was visiting Mama Craft a few days ago, I noticed the following on her blog. It’s worth repeating because it also warms me and, I believe, there would be much more happiness in this frosty world if this sage advice were heeded. Is it just me or does there seem to be a, rather severe, preoccupation with one’s self these days? Frankly, my “self”, and the selves of others, usually aren’t all that interesting. What we do is very interesting, but not because we do it, but because it brings joy to others and joy…Jesus first, others second, your self last…is what brings us closer to Him.
“The best things in life are nearest: breath in your nostrils, light in your eyes,
flowers at your feet, duties at your hand, the path of right just before you.
Then do not grasp at the stars, but do life’s plain, common work as it comes,
certain that daily duties and daily bread are the sweetest things in life.”
~ Robert Louis Stevenson ~

My heart is grateful for daily duties, home made bread, hot soup…food of both the physical and spiritual kind…, rain for a thirsty earth, oncoming winter and God’s strength, mercy and grace. He alone knows how much we’ll need in the coming days.