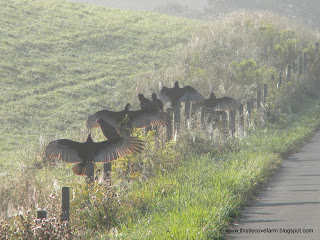 ~ vultures, drying their wings in early morning sun ~
If you pay taxes, own a *small business or farm, have a **special needs child, are a ***teacher or think health care will be free, we have Joan Pryde, Senior Tax Editor of Kiplinger Letters, to thank for writing the following on 8 October 2010.
On January 1, 2011, the largest tax hikes in the history of America will take effect. They will hit families and small businesses in three great waves.

Expiration of 2001 and 2003 Tax Relief – In 2001 and 2003, the GOP Congress enacted several tax cuts for investors, small business owners, and families.
These will all expire on January 1, 2011 and personal income tax rates will rise.

Itemized deductions and personal exemptions will again phase out, which has the same mathematical effect as higher marginal tax rates.

The full list of marginal rate hikes is below:

Higher taxes on marriage and family.

The “marriage penalty” (narrower tax brackets for married couples) will return from the first dollar of income.
Had enough? Vote on November 2, 2010 and throw the bums OUT!
The child tax credit will be cut in half from $1000 to $500 per child.

The standard deduction will no longer be doubled for married couples relative to the single level.

The dependent care and adoption tax credits will be cut.


The return of the Death Tax

This year only, there is no death tax.  (It’s a quirk!) For those dying on or after January 1, 2011, there is a 55 percent top death tax rate on estates over $1 million.  A person leaving behind two homes, a business, a retirement account,could easily pass along a death tax bill to their loved ones.  Think of the farmers who don’t make much money, but their land, which they purchased years ago with after-tax dollars, is now worth a lot of money.  Their children will have to sell the farm, which may be their livelihood, just to pay the estate tax if they don’t have the cash sitting around to pay the tax.  Think about your own family’s assets.  Maybe your family owns real estate, or a business that doesn’t make much money, but the building and equipment are worth $1 million.  Upon their death, you can inherit the $1 million business tax free, but if they own a home, stock, cash worth $500K on top of the $1 million business, then you will owe the government $275,000 cash!  That’s 55% of the value of the assets over $1 million!  Do you have that kind of cash sitting around waiting to pay the estate tax?


Obamacare – There are over twenty new or higher taxes in Obamacare. Several will first go into effect on January 1, 2011.  They include:

Thanks to Obamacare, Americans will no longer be able to use health savings account (HSA), flexible spending account (FSA), or health reimbursement (HRA) pre-tax dollars to purchase non-prescription, over-the-counter medicines (except insulin).

This provision of Obamacare imposes a cap on flexible spending accounts (FSAs) of $2500 (Currently, there is no federal government limit). There is one group of FSA owners for whom this new cap will be particularly cruel and onerous: parents of special needs children.

Under tax rules, FSA dollars can not be used to pay for this type of special needs education.

This provision of Obamacare increases the additional tax on non-medical early withdrawals from an HSA from 10 to 20 percent, disadvantaging them relative to IRAs and other tax-advantaged accounts, which remain at 10 percent.

When Americans prepare to file their tax returns in January of 2011, they’ll be in for a nasty surprise-the AMT won’t be held harmless, and many tax relief provisions will have expired.

The major items include:

The AMT will ensnare over 28 million families, up from 4 million last year.

According to the left-leaning Tax Policy Center , Congress’ failure to index the AMT will lead to an explosion of AMT taxpaying families-rising from 4 million last year to 28.5 million.  These families will have to calculate their tax burdens twice, and pay taxes at the higher level.  The AMT was created in 1969 to ensnare a handful of taxpayers.

Small businesses can normally expense (rather than slowly-deduct, or “depreciate”) equipment purchases up to $250,000.

This will be cut all the way down to $25,000.  Larger businesses can currently expense half of their purchases of equipment.

*Taxes will be raised on all types of businesses.

There are literally scores of tax hikes on business that will take place.  The biggest is the loss of the “research and experimentation tax credit,” but there are many, many others. Combining high marginal tax rates with the loss of this tax relief will cost jobs.

The deduction for tuition and fees will not be available.
Tax credits for education will be limited.

Teachers will no longer be able to deduct classroom expenses.
Coverdell Education Savings Accounts will be cut.
Employer-provided educational assistance is curtailed.

The student loan interest deduction will be disallowed for hundreds of thousands of families.

Charitable Contributions from IRAs no longer allowed.
Under current law, a retired person with an IRA can contribute up to $100,000 per year directly to a charity from their IRA.

This contribution also counts toward an annual “required minimum distribution.”  This ability will no longer be there.

And worse yet?
Now, your insurance will be INCOME on your W2’s!

One of the surprises we’ll find come next year, is what follows – – a little “surprise” that 99% of us had no idea was included in the “new and improved” health care legislation . . . the dupes, er, dopes, who backed this administration will be astonished!

Starting in 2011, (next year folks), your W-2 tax form sent by your employer will be increased to show the value of whatever health insurance you are given by the company. It does not matter if that’s a private concern or governmental body of some sort.

If you’re retired?  So what… your gross will go up by the amount of insurance you get.

You will be required to pay taxes on a large sum of money that you have never seen.  Take your tax form you just finished and see what $15,000 or $20,000 additional gross does to your tax debt.  That’s what you’ll pay next year.

For many, it also puts you into a new higher bracket so it’s even worse.

This is how the government is going to buy insurance for the15% that don’t have insurance and it’s only part of the tax increases.

Not believing this???  Here is a research of the summaries…..

On page 25 of 29: TITLE IX REVENUE PROVISIONS- SUBTITLE A: REVENUE OFFSET PROVISIONS-(sec. 9001, as modified by sec. 10901) Sec.9002  “requires employers to include in the W-2 form of each employee the aggregate cost of applicable employer sponsored group health coverage that is excludable from the employees gross income.”

– Joan Pryde is the senior tax editor for the Kiplinger letters.
– Go to Kiplingers and read about 13 tax changes that could affect you.  Number 3 is what is above.

Blessings ~ we still have the privilege of VOTING ~