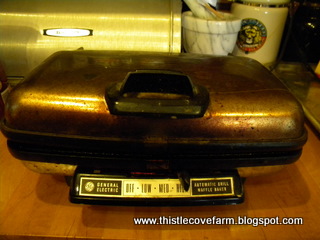 Care to take a guess of the age of our waffle iron? If you guessed forty years, you’d be right on the money! Dave bought it when he was property of Uncle Sam, at the Ft. Lee Army Base in Virginia. It’s been a good waffle iron, still is actually, but it has this disturbing little habit of sparking when the plug is placed in, or taken out of, the electrical outlet. It’s a small bother but sometimes I forget and the spark startles me. When that happens, I tend not to make waffles for a while and I dearly love waffles! CSN has contacted me…thank you Kate!…and asked if I’d like to do a review and gave me a choice of anything in their tremendous catalog. Furniture such as coffee tables, end tables, dining tables, etc. all came to mind but, somehow, the spark just wasn’t there; know what I mean, Vern? Yeah, yeah, I’m easily entertained and can do it all by myself! -grin-

Naturally, a waffle iron is just about first on my list. Wait a minute, it’s the only thing on my list. I haven’t had waffles in months and have had IHOP on the brain lately. Did you know National Waffle Day is August 24? I didn’t, until now, and it’s too late to celebrate this year…sob. According to Mr. Breakfast, there’s an International Waffle Day as well and that’s coming up March 25. Vaffeldagen originated in Sweden and is nine months, exactly, before Christmas. It’s also around the first day of spring when Swedish women would set aside winter tasks and begin spring tasks. Like making waffles.

For those of you who notice such things, the bread box behind the vintage waffle iron, is, indeed, vintage. Just about everything in this house is vintage, except the puppies, and well loved and used on a daily basis. Except the waffle iron. Last time I used the waffle iron, I told Dave about it sparking and his ears got pointy and his eyes widened. “And you’re still using it?!” “Well, yeah. How do you think these waffles sitting before you were made? The tires on the vehicles have different tracks, you silly billy.”

So, soon, very soon, hopefully there will be a new waffle iron in this house. We’ll still keep the old one because that’s what we do. We’re not to the television state yet, we don’t perxactly hoard but we do have our fair share of stuff from Dave’s homes, his mother’s fifty years of living in the same home and my homes. We’ve given some stuff away; one time we even got bold and threw some stuff away but that was really painful so now I just give stuff away. Except our waffle iron. We’re attached to the beast and the fond memories of years full of waffles.