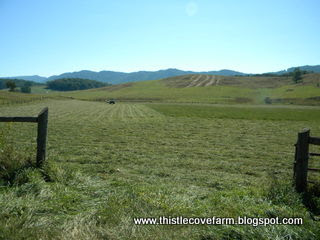 Last week John F. cut our hay on Tuesday with the idea we’d kick and bale on Wednesday. Remember the saying, “Man plans, God laughs”? It’s true. Wednesday morning at 6:30 I let the dogs outside and, while standing on the back porch, heard a soft rustling. I looked at the trees but couldn’t see them being moved by the wind. In the time it took for this to register, the skies opened and it began to pour. Then, it proceeded to pour, off and on, all day long. My heart sank. I was really, really counting on this hay being baled for square hay and stored in the barn loft. So, I did what I could do and that was look up to heaven and say, “Well God, if you want your hay to get wet, it’s all right with me.”  Even so, my heart still sank. 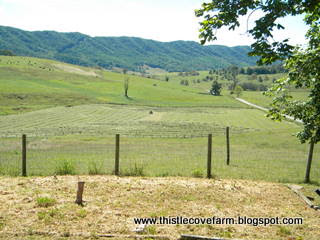 Probably, I should have taken photos of the hay field while rain was pouring down but I just couldn’t. Every time I looked, and I looked plenty, my heart just sank. Square hay keeps much longer than round hay and is better in protein and more nutritious for my animals. Round bales have more loss because they are set on the ground and the loss comes from being in contact with the ground. Square hay is stored in the hay loft, away from weather and will keep for a few years.

Thursday dawned bright, sunny and hot. Perfect hay curing weather but the men who help us couldn’t help on Thursday. All day long, I would wander to the window and stare at our cut hay on the ground.

Friday morning was much like Thursday morning and hope dawned as a spark. Around 11:00, John M. came over to tether the hay…put it up in rows so the hay could dry easier and the baler could pick it up easier. A little later, Red came to bale it and by 2:30 the first wagon was loaded and ready to go to the barn. 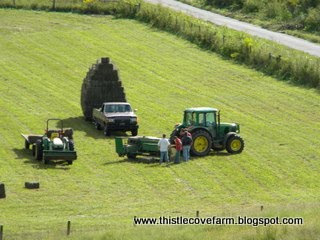 ~ ready for the barn loft ~ 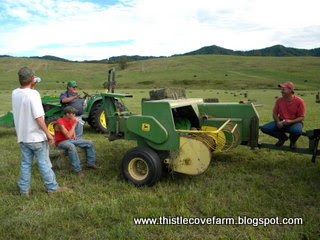 I was so over the moon, this is the last photo of the day. I totally forgot to take photos of the men loading the hay into the loft, which they did until 7:30. We were expecting rain at 6:00 but it held off… Praise God! All 377 bales of hay were put up dry and Daniel said it was the prettiest hay he’s seen this year. God was so gracious and good to us; we have DRY hay and that’s a miracle in any farmer’s book. 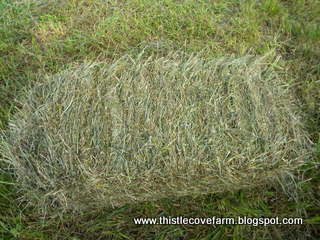 What, you may well ask, does this have to do with you? Not much other than it’s the age old story of farming and food. If you’ve eaten lately, thank a farmer. If you’ve used electricity lately, thank a coal miner. Both farmers and miners put their lives on the line every single day so we can eat and read by a light bulb and not candle light. Farmers are at the mercy of weather – rain, snow, sleet, sun shine – and it’s a crap shoot, so to speak, every single day. Crops live and die due to the lack or over abundance of rain; animals live and die due to the lack or over abundance of snow, sleet, hail. A farmer gets up in the morning, every single morning, and goes out and does what needs doing so the rest of us can eat.

Think about it the next time you shop at the grocery store, or, better yet, shop at your local farmers’ market. Think about it and then…thank a farmer.