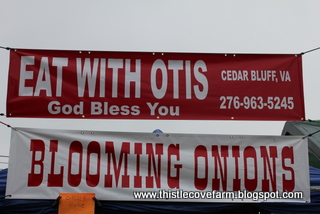 Don’t you love autumn and all the wonderful festivals? We have several in our little county and one of the favorites is the Burkes Garden Festival. It’s a harvest festival, none of that halloweenie stuff for us, we celebrate Christian holy days…thank you very much, and I enjoyed myself today. Burkes Garden is, thus far, the only agricultural heritage area in the Commonwealth of Virginia but we in the Cove are trying our best to attain such status. 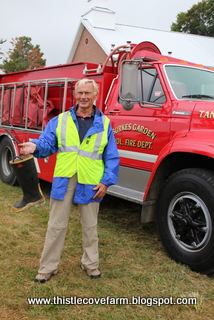 This handsome gent was collecting donations to park and, as I was leaving, he allowed me to take his photo. He remembered me fondly as, earlier, I’d slipped a fiver into the boot. I told him I’m a Cove VFD volunteer and know what it takes to keep a volunteer fire department going. Then, as I crossed the mountain, on my way out of the Garden, another volunteer fire department was accepting donations. Yep, I dug deep again. People, as in urban folks, don’t stop to think what it takes for a rural community to survive. Heck, do they even stop to consider the services their tax dollars afford them and, for their sakes, the folks who put their lives on the line each and every day? I think not, mostly. Our rural young folks are leaving by the droves to seek jobs, “better” lifestyles, spouses and, “how ya gonna keep ’em down on the farm once they’ve seen Paree?“ 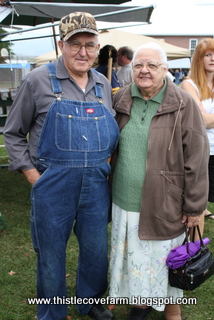 In order to respect their privacy, I won’t tell you the names of these two dear people, just know they are highly thought of and well loved by everyone who knows them. We always chin wag, just a tad, when we meet and we had a few moments of gentle fun with each other earlier today. They are Godly people but you can tell that, can’t you? The Shekinah Glory radiates from both of them. 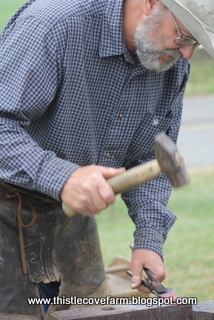 ~ Bud Thompson, farrier ~
Bud was my farrier and he’s trying to slow down a tad; although, if you ask his wife, she’ll look thoughtful and then say, “Welllll…” Bud tells stories as he beats on the anvil and his stories keep folks standing around for thirty minutes or more. He’s an amazing man, excellent farrier and what he doesn’t know about horses feet doesn’t bear knowing anyway.

Dave’s mothers’ people was from the Cove, where we now live, and the Cove people and Burkes Garden people, for generations, had a friendly rivalry. The Garden folks would tell Cove folks, “The Garden
is prettier than the Cove” and the Cove folks would tell Garden folks, “maybe so but the Cove is more beautiful than the Garden.” You know how it is; we’re still arguing over the Late Great Unpleasantness also. Especially seeing as how some d*** Yankee came here and bought what is now Thistle Cove Farm and thousands of acres of land for $300 in back taxes. The sheer nerve of that carpetbagger! I don’t believe Mr. White nor his offspring married with any of the locals and, eventually, in the late 1940’s they moved on, as in out of the area. 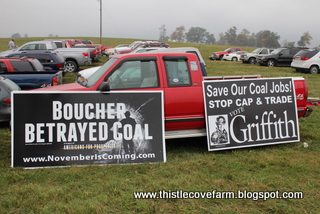 Americans for Prosperity were out in force, telling how “our” current Congressional representative has betrayed us in southwest Virginia. You see, in this part of Appalachia, the coal industry represents a lot of jobs…a lot of jobs. Also, a lot of retirement and Mr. Boucher voted for the Cap and Trade Act. Naughty, naughty Mr. Boucher! Perhaps you thought folks weren’t paying attention but they were paying attention. It’s a little…maybe a lot…like asking the fox to watch the hen house. For example, Obama trashes BP just about every chance he gets but has he offered any viable solutions? Or, any solutions whatsoever for that fact? Not really, unless it’s been of extreme late, and, as a matter of fact, he wouldn’t over ride the Jones Act the first week of the BP oil spill when, according to the Wall Street Journal, thirteen foreign governments volunteered to help us. Wait, I almost forgot. Mr. O. took American Tax Slave $$$$’$ and sent them to Brazil so they could drill for oil! I kid you not; check out the Wall Street Journal article.  Naughty, naughty Mr. O. Then, there’s Al Gore who, with his right hand don’t let the left hand know what it’s doing talent. Dear Lord. The manure is so deep, one needs wings to rise above it all! I don’t even think “some folks” realize just how sick and tired the populus is getting of being railroaded by “our” representatives. Sick and tired and mean…a very dangerous combination. You elected officials and others of your ilk should really start paying attention. November 2 is coming and we don’t want to hear any whining after the fact so y’all just pull up your big girl and boy pants and do the right thing now or look for a new job later. I know how I’m going to vote and I suggest you get that resume updated. Heck, I’m so conservative, I make the Republicans looks like raving liberals! There are a lot of folks who are sick of “bidness as usual”; I’m just saying… 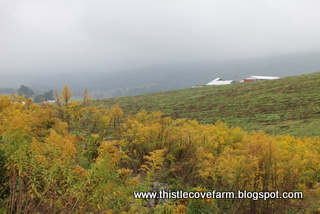 It was a good day; an enjoyable day and, as usual, I saw many folks from other parts of Tazewell County. We’re blessed to live here; yes, we are so very blessed. 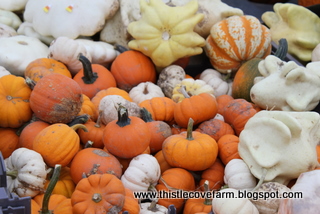