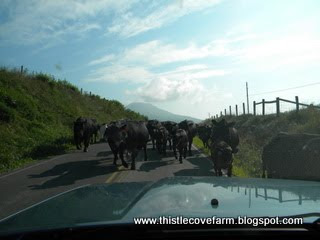 It’s been said before but bears telling again, if you don’t mind, going to town takes a lot of time, a lot of time. Generally, there are many errands because I’m not wasting time nor fuel for a trip to town that accomplishes only one thing. Nope. Trips have to have, at the bare minimum, four things or I won’t go. 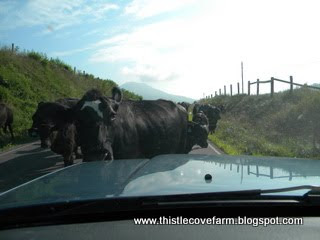 There are times we’re in a traffic jam and that eats up another ten to twenty minutes as the cows, heifers and their calves pass by. Of course, they have to stop and investigate which is amusing, probably for both of us. Dave and I will stop and allow the cattle to swirl around us; it’s safer that way for them and us. 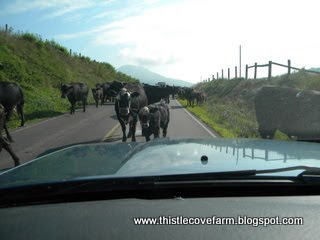 These are Angus cattle, a mix of white and black face Angus and are, originally, from Aberdeen, Banff, Kincardine or Angus counties in Scotland. All these counties are in the northeast and touch the North Sea and, except for the North Sea, are quite similar to our topography here in the Cove. Some of those counties have mountains as well and lends a greater similarity and, as many of the Cove families have Scots, Irish, Welsh and English in their backgrounds, it’s fitting Angus cattle are bred and raised here.

My background is quite similar to Dave’s background; the Hamrick’s came here from Ireland in 1654 and made their way to the Appalachia’s because it reminded them of home. The other side of my family, the Lipscomb’s, hail from Ireland as well while the Bennett’s are from Wales and the—the—oh gosh, can’t remember the other name but that side came from England and, on both sides of the family, married with the American Natives in Appalachia. That’s the family lore at any rate. It’s funny because I look Irish, head to toe, while my siblings look more American Native. Amazing, then there are those eejits who say it’s all a big bang theory. I feel sorry for them and their lack of faith ; must be a lonely bed at night.

Dave and I were in the Marrakesh Airport, waiting to leave and I, accidentally, bumped into a gent standing in front of me. Apology at the ready, when he turned he looked down…he was about 6’5″… and said, “Irish”. I told him, “no, American”. He told me, rather more sternly, “No, Irish”. It took a few moments before I realized Daddy’s people are Irish and Welsh so I, sheepishly, said, “Yes, Irish”. He said, “You could never deny your heritage, it’s written all over you.” Wouldn’t it be wonderful if the same could be said for me as a Christian? Alas, it cannot because being a Christian is a daily struggle, a daily process and I admit to being a “practicing Christian” because I’ve not gotten it down just right and probably won’t, this side of the veil. Sinful nature struggles with saintly nature but, thank God for the gift of salvation through Jesus Christ, I’m going to heaven anyway. Come, go with me, please. 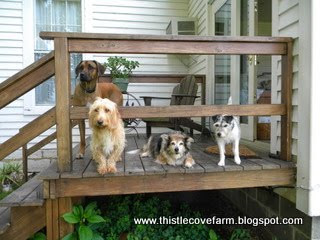 Today is a go to town day and my to-do list is full; crammed actually, and, once I leave, I’ll be gone for hours and hours. I’m tired and haven’t even left but when I come home, it’s to Dave and the monkey’s; more fun than the originals and a lot better at loving, to be sure! I love the above photo, it’s one of the few where all four dogs are together, two pups on the left and two senior citizens on the right.

And so it goes.