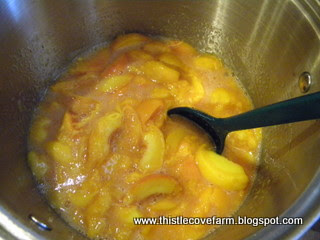 ~ twenty-four peaches, cut up and simmering ~

Peach Slurry. Gosh, sounds rather dreadful, doesn’t it but it’s so good your tongue will slap your brains out. -grin-

I bought a half bushel of peaches and have been making my version of peach jam although, I wanted to make pesto today. Unfortunately for pesto making, it’s pouring rain and it’s best to make pesto on a sunny, hot day. Peach Slurry is a long process but, I believe, worth it to have for grilled pound cake, shortbread, biscuits, PB&J sandwiches, gifts. It’s a burst of sunshine on a snowy winter’s day and well worth the effort! 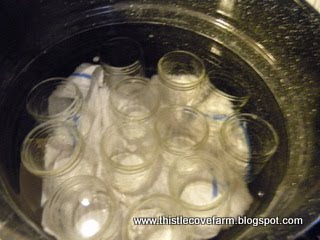 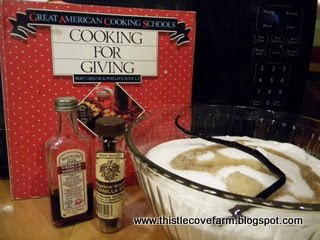 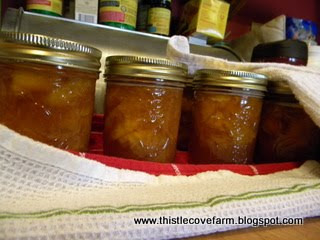 ~ one dozen half pints plus one ~

Bert Green and Phillip S. Schulz wrote Cooking for Giving and it’s one of my favorite cookbooks. It’s chock full of wonderful, delicious recipes that are lovely to give as well as keep for oneself. I’ve used this cookbook for the last hundred years…or so it seems…and the recipes are still just as fabulous now as when I first stumbled across this little treasure. Well, since it was published in 1984, certainly. Amazon has six copies priced at one dollar each; what an absolute steal and yes, please do consider this my recommendation to purchase said book!

All that to say, nope, I do not go religiously by the recipe. As far as I’m concerned, recipes are simply suggestions and I can, usually, make them just a tad better. I’ve been cooking for four and a half decades so, surely, I’ve picked up something in all those years.

Irena Chalmers is the leader in the ‘one subject cookbook’ and is Editor and Publisher of, among a great many others, the Great American Cooking Schools series. The Cooking For Giving cookbook is where I derived my version of their Peach-Vanilla but I call mine Peach Slurry.

You might as well know right now, I’m not a big fan of exact. Everything I do is done to taste, look, touch or eyeball but if you’re new to canning, you’d be better off following the directions exactly.
Yuck. No joy there but it is, probably, safer for you. It may be safer for me as well but as I’ve never killed anyone nor made anyone sick in all these decades, I’ll stick to my own, un-exact, methods.

Place twenty-four peaches into a hot water bath; simmering is fine, boiling is fine but more dangerous so I prefer simmer. Let them sit a minute then place them into a cold water bath. At this point you need to  drag up a chair, sit down, get comfortable and proceed to slip the skins, slice them and put the peaches and the lemon juice into a sturdy kettle.

Let them come to a boil…this takes almost forever as you don’t want the heat turned up high but rather -here we go again- a simmer. Stir, Stir. Stir. You don’t want the peaches to stick because then you’ll have a burnt tasting mess on your hands and who wants to waste time, effort, money, peaches, etc.?

Certainly not me so here’s the recipe to make it easier for you to cut and paste…just in case you want to try Peach Slurry.

-Twenty-four peaches
-Six cups sugar
-Two vanilla beans – preferably from Madagascar as, I believe, they are bestest although Mexico beans aren’t shabby either.
-One-half tablespoon or two teaspoons if you’re kitchen challenged double strength vanilla extract. I pour in a dollop.
-One tablespoon lemon juice but, again, a dollop will suffice.

The twenty-four peaches and lemon juice are simmering on the stove, slowly coming to a boil. After coming to a boil, let them boil ten minutes. Stir, stir, stir…please don’t tell me you’ve already forgotten!

Pour the vanilla extract into the sugar, mix in the beans and sit to the side.

By the way, the jars should have been washed in hot, soapy water then rinsed in hot water and then placed in the canning kettle so they can be kept HOT. Same for jar rings and lids.

I pour Peach Slurry to within one half inch of the top of the jar, slap on the ring, tighten the lid and put back into the canning kettle where they boil for…how long would you guess? That’s right! Ten Minutes! I take the jars out of the kettle, put them on a kitchen towel on the counter and then cover all with a double layer of kitchen towels.

From a loved one, the words “I Love You” hardly sound as sweet as the ping of a jar sealing. You do NOT want the air conditioner on, not even on low, nor do you want the ceiling fan stirring the air. The air must be Absolutely Still so the jars cool and seal at their own rate. Trust me, this is a good thing. A Very Good Thing. 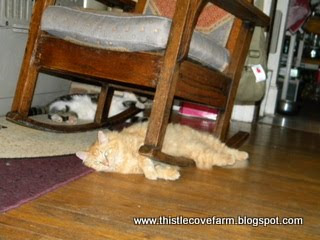 I’m not so sure the cats are as enthralled as I over the Peach Slurry but that’s okay, I’ll give them a different kind of treat and the dogs have been underfoot all day. If I’m in the kitchen, something good must be happening.

Post Script – if the jars don’t seal, if the lids aren’t depressed when cooled, Do Them Over! Very Important!  If the lids aren’t depressed, if there’s still a little “mountain” of lid, that means they didn’t seal. If they aren’t sealed, you’ve two choices…put in refrigerator and eat immediately OR Do Them Over! Please, no fooling around…safety first…last…and foremost.