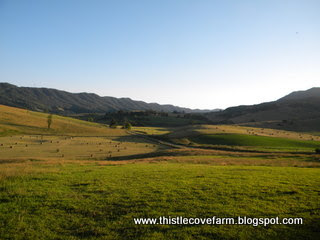 Boys Howdy, is it hot where you’re living? My parents live in central Virginia and they said it got up to 105 F yesterday; it was “only” 95 F here at Thistle Cove Farm. I’m thinking that’s hot enough to turn a sinner’s heart, eh? It was so hot, I forgot to put up Sabbath Keeping! That’s never happened before and I apologize; I feel a right proper slackard!

Tonight, at midnight, is the deadline for last Monday’s drawing and likewise for Tuesday and Wednesday. I have other things to giveaway and will get to them but I’m moving slowly, slowly these days. It’s just taking me so dang long to get most anything accomplished in this heat. One thing I did accomplish is my guest post at From My Front Porch which is Misha’s blog over in Tennessee. She asked me to do this and it’s been great fun, thinking about early days and going through my thousands of photographs. If you’re interested in early days, here at Thistle Cove Farm, have a visit with Misha; you’ll learn more than you wanted to know! -smile-

I’ve been knitting again…for some reason, my hands and mind wanted the comfort of yarn and needles; I can’t imagine why in this extreme heat but…there you have it. I’ll show you the two spiral necklaces I’ve knitted as soon as the second one is off the needles. The farm building office and bath are finished; photos as soon as I’ve cleaned both rooms.

I have been reading; here’s a partial list of books on my table; TBR means “to be read” and I bought a lot of these books, on the $1 table at BAM and some I bought for fifty cents at Big Lots…jackpot! Yeah, I know these books are a couple of years old but the words are still new to me -grin-. I’ve still got a bunch from the library that are stacked and either ready to read, finish or return.

~The Mercy Seller by Brenda Rickman Vantrease – one of the best historical fiction books I’ve ever read, bar non! This one is going to be a giveaway soon. Briefly, in 15 century Europe and England religious intolerance is spreading like wildfire and folks are being burned, drawn and quartered and tortured for their Christian faith! I am not ashamed to say I cried as I read this book. I cried at man’s inhumanity to man and woman in the name of God.

~Traveling While Married by Mary-Lou Weisman – to be read but a skim through says funny!

~ The Woman Who Walked to Russia by Cassandra Pybus – TBR, looks interesting.

~ Ronald Reagan and Margaret Thatcher: A Political Marriage by Nicholas Wapshott -TBR. Frankly, I think Reagan was one of our best Presidents and have long admired both  he and Margaret Thatcher. At that time, in a world gone, seemingly, mad Reagan and Thatcher formed an alliance that made them indomitable allies and both stood for low taxes, free markets, and a strong defense against communism; to their detractors I ask, “So what have you done to outshine their legacy?”

~ A Bull in China – Investing Profitable in the World’s Greatest Market by Jim Rogers – TBR but I read and heed anything Jim Rogers says or writes. The man is brilliant!

~ Casa Nostra: A Home in Sicily by Caroline Seller Manzo – TBR, a non-fiction that weaves a spell of the extraordinary culture and world of Sicily. It’s going to be good, really good and is another one of those books where she just GOES and live somewhere else. Okay, she married the guy and then they traveled but, eventually, ended up at his home in Sicily. Gosh, I love traveling like this…going and living like the locals! Second best is reading about it.

~ The Aviary Gate by Katie Hickman – TBR, an historical, fiction, romance novel that tells the story of a woman captured and sold, in 1599, into slavery in the Sultan’s harem. Joy gives her review and I think I’m going to like it although it will, probably, make me angry -smile-.

~ Malory: The Knight Who Became King Arthur’s Chronicler by Christina Hardyment – TBR and think this will take me a long while to read and may never finish. Again, the 15th century and a review that says, for the most part, a successful write.

~ Sea of Faith: Islam and Christianity in the Medieval Mediterranean World by Stephen O’Shea – TBR and another book to dig deep. Perhaps you know Christianity, Islam and Judaism have a long and shared history; the Sea of Faith addresses early days in this fascinating period. Check his blog as well.

~ We’ve Always Had Paris…and Provence: A Scrapbook of our Life in France by Patricia and Walter Wells – reading now and it’s delightful but I can’t see me having a chin wag with these two; maybe them and Martha Stewart but not me.

~ The Lady in the Palazzo: At Home in Umbria by Marlene de Blasi – TBR and I’m sorry I’ve not yet stumbled upon her first two books in this series. Views From the Slow Lane give a great review. Again, one of my favorite type books, it tells the story of moving somewhere and starting a life amongst everything new. Recipes included…how great is that!?!

~ Investment Biker – On the Road with Jim Rogers – reading about his travels around the world on his BMW motorcycle with companion, Tabitha. Adventure Capitalist is his book written about his second trip around the world with wife Paige Parker. Rogers tends to be a private person which his writing reflects.

~ The God Catchers – Experiencing the Manifest Presence of God by Tommy Tenney – TBR – I’ve read other of Tenney’s books and enjoyed them; expect to enjoy this one as well.

~ L’America by Martha McPhee – TBR – I’m really looking forward to reading this one in part because of her blog. She posted of her mother’s recent visit wherein her mother brought her dog, her cat and ten baby chicks. Now just consider this intriguing woman is the mother of the author of L’America; it’s simply got to be a great book!

~ Searching for a God to Love by Chris Blake, TBR -a new to me author; anyone know anything about him?

Share
Pin
Email
« Searching for London
You’re all Winners, but… »