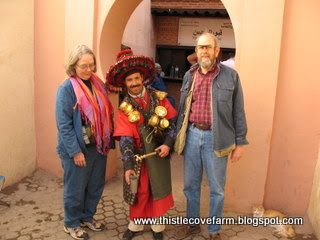 ADDED NOTE: Jacky Miller has written a marvelous article on 100 Things to do in Morocco and I recommend it highly! The photos are wonderful and brought back so many memories. Dave and I managed to get to Morocco three times and all three were fabulous…I’d love to return but, in the meantime, I’ll review my posts on Morocco and visit Jacky’s article.

If you’ve ever noticed, on my ‘Cozy Visits’ sidebar, there’s a blog called “My Marrakesh“. It’s a beautiful blog, beautifully photographed and well written. It’s the story of an American woman and her husband who purchased a home just outside Marrakesh and have set about restoring a guest cottage and the olive grove. It’s long been a favorite read as Morocco is one of my favorite countries, if not my favorite country, to visit.

Perhaps, when most people hear the word “Africa” they think of the Congo or safaris or elephants, lions, giraffes and wildebeests. Not me. I think of Morocco and camels, Blue Men, Sahara Desert, Bedouins, Berbers and other nomadic people. Since I was a little girl, sitting in Sunday School and listening to stories of Moses leading his people out of Egypt, traveling toward the Promised Land but wandering in the desert for forty years or the story of Abram, his wife Sarai and how they traveled, pitching their tents or the many other similar stories, I have been absolutely enthralled with nomadic people as well as the Middle East and general area of North Africa. It amazes me how people lived, and do live, and it’s fascinating to be a first hand witness to same.

In 1989 there was a Nomadic Peoples Convention but very little since then that I could find. I did find that in September 2007, the Declaration of Nomadic and Transhumant Pastoralists was written in Segovia, Spain. This document represents 50 tribes in Africa, Asia, American and Europe who gathered together to address common problems and, hopefully, find workable solutions. Nomadic people all over the world are finding themselves being pinched out of existence, or existence as they know it. They are, slowly, being forced to move to cities and give up their tents, their roving lifestyle, their very being. Governments are confiscating forest lands, deserts and other land masses and forcing the Nomadic people to move, move, move, always move. The concentration of political and economic power in the hands of a very few are forcing the rest …of us… to, at the very least, compromise and, at the worst, to do the bidding of those elite. Sound familiar, yes? It begins with the least among us. Also, Nomadic Peoples Project has some great photos and good, but outdated, information.

A few years ago Dave asked if there was someplace I’d really, really like to see. Immediately, two places came to mind: Morocco and Mongolia. He grinned, turn around to his computer and said, “thanks.” A couple of weeks later he asked, “how would you like to visit Marrakesh, stay in a riad in the medina, shop in the souks and stay in a Bedouin tent in the Sahara Desert?


He went on to tell me he’d been in touch with Sahara Trek and was in process of planning our trip. He and Luiza planned a trip so fabulous we still can scarce believe we were there…in Morocco, Marrakesh, Sahara Desert, Atlas Mountains and other, almost too, beautiful places. If you’re ever in the position to go to Morocco, talk to Sahara Trek first. I pour over their website and have long wondered how I could possibly do their Crafts Tour.

Salem Aleikum – peace be unto you was the first phrase we learned and used it mightily while in Morocco. When Dave and I travel, we fit in as well as two pasty white Anglos are able -smile-. We both dress respectfully and I make sure all my body parts, save hands and face are covered and, usually, wear a scarf except when overheated. I figured Muslim men would rather see my bare head than see me sprawled on the street -smile- although never did I enter a holy place with my head uncovered! We wear tie shoes, no sandals, though that’s just as much for safety as respect. I’ve seen what a donkey cart can do when the wheels run over a sandaled foot and it’s not pretty. Remember the old saying, “an ounce of prevention is worth a pound of cure” and when traveling, it’s worth even more!

Morocco has a colorful history, being owned by the sultans as well as being part of the Ottoman Empire and then various other, European, countries claiming bits and pieces if not the whole. The French influence is in evidence, to my eye at least, more than those other European countries and we heard Arabic, French, English, Spanish, Portuguese and other languages being spoken. 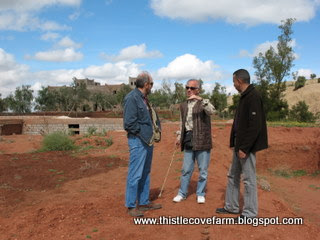 Our primary contact in Marrakesh was Julio, an expat from Brazil, now living in Marrakesh and he was wonderful! He actually saved us from being stranded one night. Dave and I had gone out to eat and returned to the riad around 9 p.m., certainly not late, there were children still playing in the narrow streets of the medina. We stepped up to the door, grasped the handle and…nothing. We were locked out. We were struck dumbfounded! The woman who was responsible for making breakfast, cleaning, etc. had gone home for the evening something we couldn’t remember her doing prior. We stood there, gathering our wits and wondering what to do when Julio strolled up and said, “Is there a problem?” If this hadn’t been a Muslim country I would have fallen upon his neck in happiness! He took us to his home and made arrangements for us to be let in to our rooms and all within the hour; thank you, Julio! 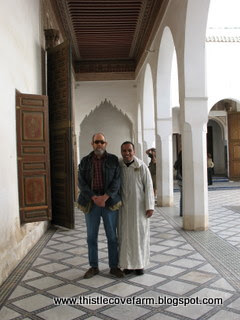 ~ Abdul, our guide in Marrakesh ~
Abdul was our tour guide in Marrakesh and he was fabulous! We saw so much of the Medina and of the Djemma el Fna  and Abdul was so gracious and kind to us. He has a wife and a little boy and little girl and we compared notes on how we live. He was amazed I made my own bread…”but my own wife buys our bread!” he exclaimed. The fact I could sew, quilt, spin yarn, knit, garden, put up food and do all those things one does on a farm absolutely astounded him. He kept saying, “but you’re not like other American women I’ve met.” Dave would respond, “that’s for certain!” -smile- 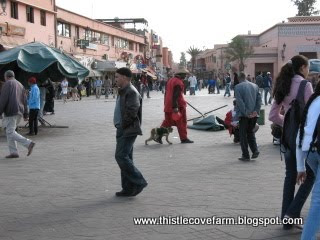 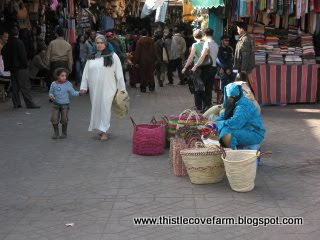 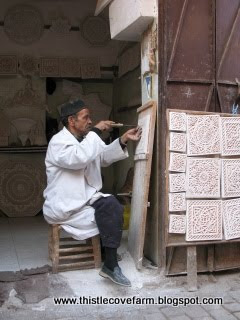 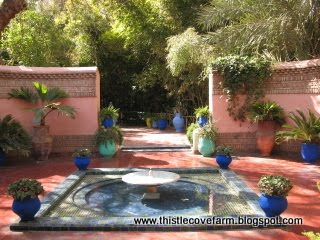 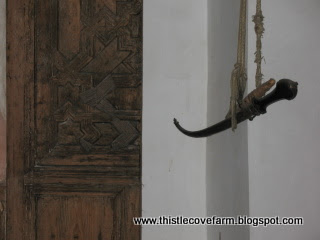 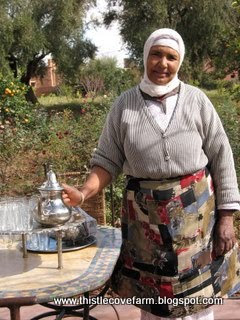 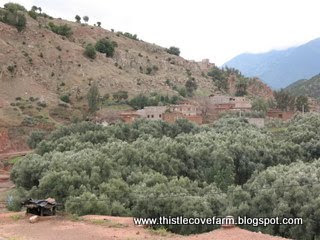 Julio made it possible for us to visit a Berber family and this was, yet another, highlight of our trip. This kind woman graciously invited us into her village and home, gave us a tour, fed us refreshments and allowed us to take photos. Julio is trying to help build tourism in the outlaying areas and if our trip is any indication, he’s doing wonders for both tourists and villagers. Well done, Julio! 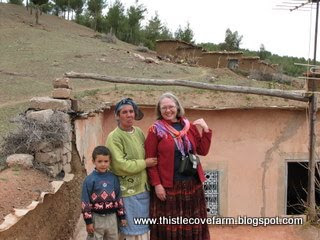 She was so, rightfully, proud of her new kitchen. In it she had a two-burner Coleman camp stove while in her old kitchen she had something similar to a kiva fireplace for cooking. She served recently pressed olive oil, freshly harvested honey, bread and always, always, always mint tea. Sublime! The various rooms of her home were centered around a wide square where a sapling was growing, I believe a fruit tree. 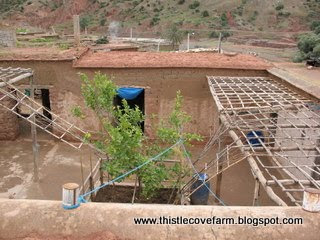 ~ the central square in her home ~

As we sat in her living room, making small talk between the interpreter and our hostess, like a big ejit I began to cry. Immediately, she noticed and wanted to know what was wrong. I nodded at her and grinned like a monkey. “Nothing,” I replied, “I’m just happy.” She grabbed me and gave me a huge hug and started chattering away like I could understand. And you know what? I believe I could. We were just two country women, one with a bit more money, one with a bit less money, but interested in the same things…taking care of our families, making sure everyone had food and clothing, being a good hostess. Maslow was right; it all comes down to food, shelter, clothing. After that we’re greedy.

She invited me to stay and told Dave he could, “go to the city, get a good job and send money home.” That’s what her husband did and it was a workable solution for them. She told me she wanted me to stay because I “was useful. You can milk, bake bread, spin, sew and you dress like us. You stay,” she said firmly.

Of course, I, nor Dave, stayed but continued on through the Atlas Mountains and adventures beyond. I’ll tell you about those in my next post. Now that I’m re-visiting Morocco, I find I don’t want the journey to end, quite yet. How about you?