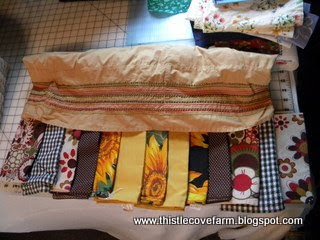 ~ material for a table runner ~

WHEW! It’s been a couple of days at Thistle Cove Farm. I suppose I should stay away from the media but then, dang it, “they’ll” sneak up on me and I’ll have no one to blame but myself. Like most of America, working America that is, generally, I’m too busy getting things done to pay much attention to how the politicos are reaming me. However, the past few days have found me glued to the radio trying to figure out if those blooming ejits are actually going to pass the debacle they are calling “health care reform”. Ha! It all makes me want to run, screaming, for sanctuary.

Okay. I’ll tell you about farm work. Town errands took up a portion of the morning and when we returned home, I worked in the studio. I’ve been dyeing yarn and doing a series of felted tea cozies, cotton table runners, quilts and other textiles but today took time out to iron some antique vintage aprons. Our county library is having an exhibit, in conjunction with VA Minds Wide Open and asked if I had some things to loan. They were especially interested in aprons and I’ve got a few dozen old aprons that were clean but needed ironing. I love to iron, seriously! it’s such pleasurable work, ironing those old aprons and preparing them to be hung in our local library. The librarian also wanted other crafts so I’ll take some hand spun yarn, roving, felted tea cozies and other things and show photos when the exhibit is completed.

I was just finishing ironing the last apron when the dogs began barking. Red and Daniel came to help get the animals ready for spring. Around here that means de-worming horses and sheep, vaccinating and trimming feet. I wasn’t ready to vaccinate, wasn’t aware the fellers were coming tonight so we just de-wormed and trimmed a couple of horses feet. I went to call in all the animals as they don’t come for anyone but me. It’s a hoot! I go to the fence and begin calling, “Here Sheep! Sheepie, sheepie, sheepie; heeeerrreee sheep!” As fast as their little legs can carry their fat little bodies, they came bouncing over the meadow thinking they were in for a treat. Usually corn but tonight not. I like keeping everyone healthy and well as it’s a lot less expensive and a lot less work than getting them well. 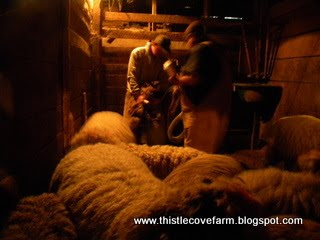 ~ de-worming sheep ~
These photos are blurry because I didn’t use flash plus it was dusk and in a stall in the stable. There’s one lone light bulb, shared between two stalls, and that’s the entire illumination. Camera flash, indeed any flash, tends to spook the animals and it’s already a, somewhat, fragile, situation. Red and Daniel have been farmers a combined total number of years than I’ve been alive and still do this type work seven days a week. I used to do this work but Dave has decided he’d rather I not put myself in situations where I could get injured. Bless him! So, I do the donkey work – call in the animals from the far pastures, open and close gates, run for supplies, hand off supplies, etc. And take pictures. Around here, everyone is resigned used to me taking photos; I don’t even ask anymore. It’s so much easier to de-worm sheep in close quarters. There’s not much room to move around and that means the sheep are less active and less likely to take out a human’s knee. Generally, we crowd them into a small stall, shove the de-wormer down their throat, mark their forehead and, when the crowd is finished, all are turned loose.
I like for everyone to be de-wormed prior to Sheep Shearing Day; it gives the meds time to work and the fleeces time to be cleaned by Mother Nature. I like clean pastures, thus clean fleeces, but I’ve had to feed so much hay this winter, I’m concerned the sheep fleeces might have a little vegetative matter in them. If they do, I won’t charge as much money as I prefer selling a superior product. 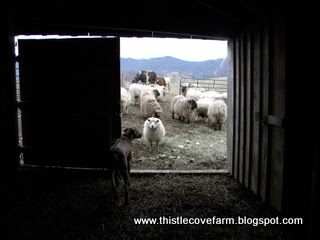 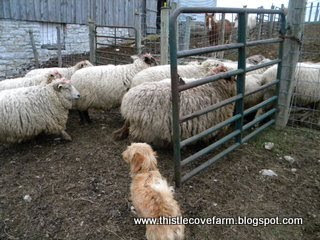 ~ Sam, watching as sheep are turned out  ~ 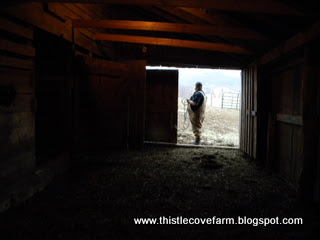 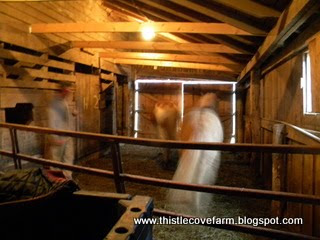 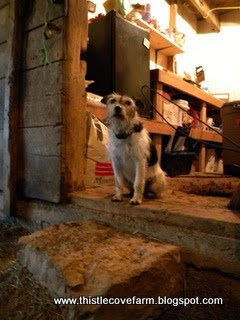 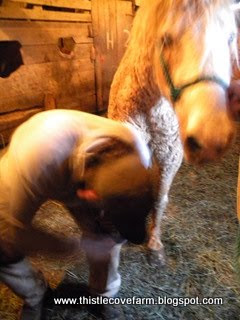 It was a long, hard job but eventually all the sheep were de-wormed, all the horses were de-wormed and two had their feet trimmed. It’s late, the dogs are all sleeping in various piles around the room, the cats are curled into tight little balls and I’m ready for sleep myself.

Spring. The beginning of work on the farm; early mornings and late nights but, hopefully a lot to show for the efforts. May it always be so.