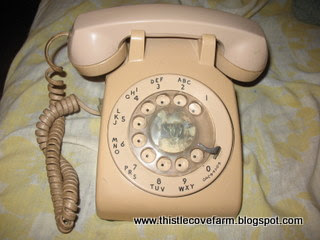 Today I wrote a letter to the State Corporation Commission of Virginia wherein I outlined, in detail, the problems and lack of service we’ve encountered with Verizon in the last eighty days. While I won’t include the enclosure here, I will show the letter. By the way, I did mail a copy of the letter and enclosures to you earlier today when I mailed the original to the SCC and some details have been abbreviated due to the public nature of blogs.
As an aside – telephone service was restored sometime after 1:30 today. How do I know? Because my Mother telephoned and left a message telling me a family member had passed away. Thankfully, service was restored so I could receive this message.

Since 11 January 2010, our telephone service has been either disrupted, in the form of static or dropped calls, or non-existent. As of today’s date, we have no service at all. There’s no dial tone, no static…nothing. We e-mailed Verizon a request for restored service and Verizon replied we would have service restored 10 April 2010 by 7:00 p.m.

FDB, my husband, and I have made dozens of complaints to Verizon since 11 January 2010. We understand our neighbors have also made complaints so this has been an on-going, yet unresolved, problem. Enclosed are copies of the notes I’ve kept since January 11, 2010.

Essentially, Verizon would take our complaint, pass it down the line and then clear the complaint! They would tell us, “we have no record of your service being disrupted.” We’ve spoken with Verizon employees (Rodney, Michelle, Kelly, Jesus and others) at their 1.800 number, sent many e-mails, spoken with technicians (Dave, James and others) in the field and on 1 March 2010 I called Verizon Customer Advocacy and spoke with Miss Campbell. Miss Campbell was rude and indeed typified the type of “customer service” we’ve “enjoyed” with Verizon since day one.

Miss Campbell said she would do the following:

March 1, 2010 – called VA State Corporation Commission and spoke with Terry. She said to send her a letter outlining dealings with Verizon.

March 3 – Miss Redwood called and asked about service; told her it was still “intermittent” with lots of static and dropped calls. She said she would call back in two days.

March 6 – Miss Redwood called, told her phone service is no better; haven’t heard from Verizon since.

For eighty (80) days worth of troubles, Verizon has given us ten (10) days credit on our intermittent, disruptive, dead phone “service”.

As the matter stands today, March 30, we expect to be without telephone service until Verizon can “correct” the problem on April 10 at 7 p.m.

We have tried to work with Verizon and am sorry they have placed us in a position to make a formal complaint to the State Corporation Commission of Virginia.

What can now be done?

P. S. When we’ve spoken to Verizon employees they have asked for other telephone number whereby they can contact us. We have no other telephones that work in our remote, rural valley. Cell phones work about ten (10) miles up the road but not at our home. There is, virtually, no way to communicate, either incoming or outgoing, except by our land line telephone, which, as this letter explains, hasn’t worked correctly since the beginning of the year.

Blessing ~ the phone worked for a while today ~
Thanks for visiting Thistle Cove Farm,
Sandra