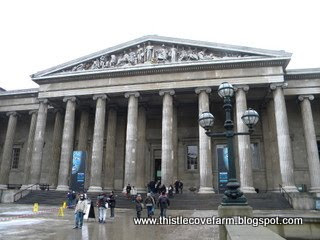 ~ British Museum ~
The British Museum is AAAmazing; it’s absolutely mind-boggling to walk in and be surrounded by so many centuries of history. I could spend a week here and never see it all, it’s impossible because there are so many artifacts. I started to say, “of special interest…” but then began laughing at myself. They are ALL of special interest and I found myself being diverted again and again and again as something would catch my eye and I would be pulled into a different room to gasp in amazement as I peered at something new to me. 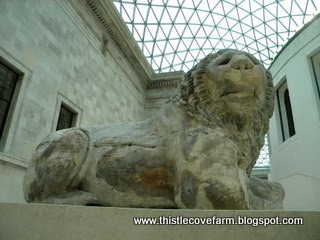 The lion weighs more than seven tons and stood at the Knidos harbor entrance in southwest Turkey.  It’s dated from 370 B.C. to 2 B. C., folks disagree as well they should because no one truly knows, do they? Not knowing doesn’t take away from the lion, it’s still imposing. 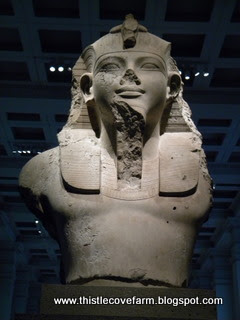 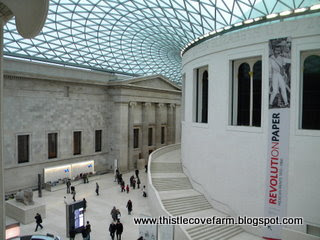 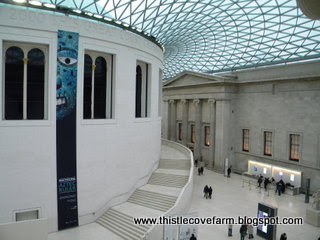 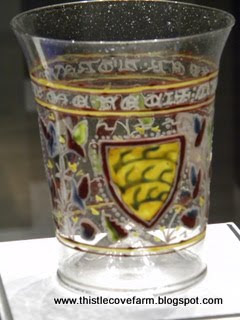 A vessel called a ciborium, from about 1215-1230, Limoges, France. While it looks like a drinking vessel, the note said it was for holding the “consecrated host” or the bread during Holy Communion. The writing on the edge is Kufic or Arabic and shows the Islamic influence. 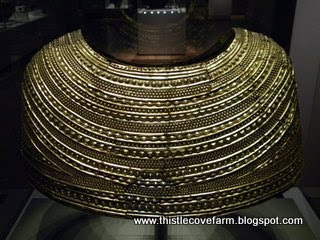 ~ gold cape ~
The cape is gold, from Mold, Clwyd, Wales and from the Bronze age, about 1900-1600 B. C. Can you imagine how small the woman or girl would have been? She would, probably, have been of a wealthy family or perhaps a religious order…what do you think? 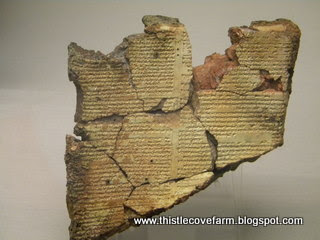 ~ A fragment of tablet ~
The Royal Library at Nineveh, in its day, was among the best…if not the best…in the world and this tablet dates from about 668-631 B. C. There were thousands upon thousands of such tablets in the Royal Library and to think of the knowledge that’s lost…makes me want to weep. Do you remember the Biblical story of Jonah in the belly of the whale? He was trying to escape God because God wanted Jonah to go and preach to the people of Nineveh and Jonah said, “no” and then ran to Joppa where he boarded a ship for Tarshish. There was a storm, Jonah was found asleep by the sailors and then, subsequently thrown overboard because he asked to be thrown overboard and was swallowed by a whale. He spent three days in the belly of the whale and then was vomited onto dry land.
He commenced to Nineveh where he preached to the city of 120,000 where, led by their King, the Ninevites turned from their evil ways and turned toward the Lord God Jehovah.
If you visit this link, near the Narrative section, you can hear the Golden Jubilee Quartet sing, “Oh Jonah”…fabulous!
And on that note…no pun intended…I leave you. It’s time to catch the Tube for Charing Cross and the Wyndham Theatre to see An Inspector Calls.
Until next time,
Blessings ~ bits and pieces that lend blood and teeth to Holy Scripture ~ museums ~ theatre ~ Tube ~