It’s New Year’s Day and, hopefully, you’ve celebrated in a manner that’s left you full of life and looking forward to this new year and all the promise it holds. We celebrate quietly at Thistle Cove Farm, no mad dashing about, no frantic parties, no serious consumption of spirits, no overeating. Heck, we don’t even stay up to see the Times Square ball drop, hear the clock chime or clink out glasses together in a toast. My attitude is the new years have managed to get here without my help for lo, these many centuries; I see no need to change my ways now. -smile- The dogs and I did get up in the wee hours, for an outside visit, but it was too overcast to see the Blue Moon, the last full and Blue Moon of 2009 and the decade as well as the first Blue Moon of 2010. I believe there’s a Blue Moon on New Year’s Eve about every seventeen years or thereabouts so this was another rarity. The next Blue Moon will be later this year, in November.

“Full moon is a blue moon on New Year’s Eve 2010” reads NY Daily News. Ummm…does anyone want to help out staff writer, Tracy Miller or the editor? New Year’s Eve 2010 isn’t for another twelve months, folks, you’ve got it All Wrong. 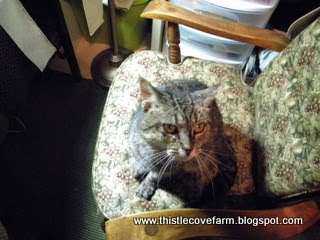 We ended our year just as we’d begun our year…by saying good-bye to a beloved family cat member. Boscoe Mancat passed away and is being cremated and will, eventually, be buried with our other deceased companions. He just couldn’t seem to pull through and, we think had cancer. Bos was a good little cat, well mannered when at all possible, and spent his last few months in a quiet, warm place with lots of canned tuna, cat food and fresh water. He loved to be petted and would purr his happiness loudly. We’ve lost eight companions this year and, frankly, I’m happy to see this year, and the body count, end. We had many blessings though, among them Sadie, Sam P. Spade, Miss Emma and Mama Cat who is now called Mama Cass because she’s a fierce consumer of calories. Thank God our animals, and ourselves, had good health this year with no accidents or injuries. 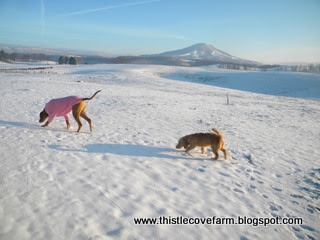 Yesterday, was spent in the Scottish tradition of Hogmanay. There are many theories as to how the word derived, visit the link to take your pick. For many centuries, Christmas was banned in Scotland and it’s only been since about the 1950’s it’s been celebrated but Hogmanay has been celebrated for hundred of years. “First footing” means to welcome the first foot, or person, in the house after midnight. The “first foot” should be a dark male and never a light male because that harkened back to the days of Viking invasion and a light colored male meant Trouble. The dark male was to bring coal, shortbread, food, whisky and salt which symbolizes prosperity, enough food to eat and plenty to drink; salt is necessary to live and for food preservation. Like most of Christian holy days, or holidays as its come to be known, there are plenty of pagan rites and activities closely associated with Christmas and Hogmanay brings its fair share. It is interesting and, in some of the byways and smaller, older Scottish communities, those ways are still inter-connected. BTW, it’s spelled whisky in Scotland and whiskey in the rest of the world.

While I don’t participate in all Hogmanay activities, I do clean house, sweep porches and, if we had wood burning fireplaces, would have cleaned them as well. My donations were mailed so folks would receive end of year credit, bills were paid and I worked on getting calendars ready for today. It seems to Dave and I, we lead quiet lives but for all that, I keep four calendars. There’s the photos of Scotland kitchen calendar, my Franklin Covey/Day Timer book, a spiral bound desk calendar at the computer and the erasable monthly calendar on the refrigerator door. I also worked on my notebook where I keep a prayer list, quotes that prick my heart and mind, notes on various sermons I’ve heard, etc. For a few months, I’ve been working on clearing the decks…somewhat…by giving things away, gathering my studio projects in the studio, moving furniture around, hanging photos, paintings, pictures…in general, making this house a home. Many people in the south eat black eyed peas on New Year’s day; Aunt Esther has eaten black eyed peas and pigs feet for seventy or eighty New Year’s. -shudder- I just can’t get my mouth around pig’s feet and she swears I don’t know what I’m missing. I do though…know. I’m missing pig’s feet and am much happier for it!

How do you keep your family organized?

I’ve never made resolutions, have never seen the need and as Daddy always says, “if you’re living right, there’s no need to make resolutions.” Goals are another thing and I do spend some time thinking about the coming year, what I’d like to accomplish and then make some plans, write some goals and forge ahead. I’ve a goal that’s been held over from two years ago and should be ashamed to say it but there it is! This is the year I want to finish that goal and am making room, daily, to spend time to accomplish that end. Another goal that goes from year to year is to read five chapters of the Bible each day and, thus far, I’m pretty much on target. There are a few days I don’t plan well and only manage to read a smaller portion but, rarely, do I miss Scripture reading entirely. 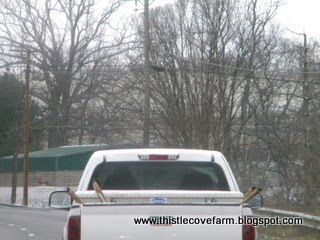 Robert Burns wrote Auld Lang Syne which is traditionally sung every New Year’s Eve midnight. We didn’t sing it last night but I did think about it as I was going to sleep.