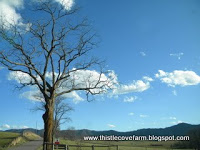 Like a large portion of the country, we have been having our share of Weather. Since December began, we’ve had snow, rain, ice, extremely high winds and bright, sunny days. This past week has been c-o-l-d with wind chills below zero and the livestock water troughs would have frozen had it not been for the new de-icer placed in the middle. The de-icer is electric and can only be used near the barn were it can be plugged into an electrical outlet. There’s also a blue bucket, with an electric line, and that’s filled with water that will, eventually, warm for the sheep. I’m at the age where it’s cheaper to pay the electric bill than chop ice every day yet even in the depths of winter, I’ll still have to chop ice as the de-icer simply cannot keep up.

Winds have approached 60 plus miles per hour and it’s taken extreme energy to do battle to walk to the barn for morning and evening chores. The neighbors came and put the hay spear on the tractor so now two round hay bales have been set out for the horses. I throw out bats of rectangular hay bales for the sheep but my work load is still cut appreciably. 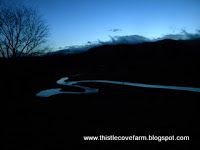 ~ before dawn, a new river, formed by tremendous rains ~

The wind storm has knocked down trees onto power lines and portions of our county and southern West Virginia have been without power for three or four days. Electrical line-men earn their pay…and then some!…because no matter the weather, they are Out There fixing lines so the rest of us can blow dry our hay and watch television. Thanks, guys and gals, you’re appreciated, as they say ’round here. 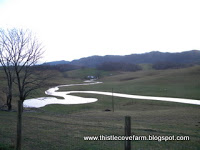 We’ve been flooded IN due to the amount of rain we’ve had. Falling Rock is the name of a local cave and it’s a beauty. I’ve been in it once, about fourteen years ago, and, even then, it was difficult. I had to first wade through two foot of muck and manure then duck walk fifteen feet, or so, under the cave lip. After entering the cave, I could stand up and appreciate the thirty foot ceiling over the underground river. There were blind fish in the water along with all sorts of fossils and other interesting bits and pieces. Anyway, that’s where our water comes from and a couple to a few times a year, it floods. When it floods, it crossed the road at two separate places and if we’re home, we’re home for a while and if we’re not home, we better find someplace to hole up.

In the above two photos, please note…this is not a true river, creek or stream. 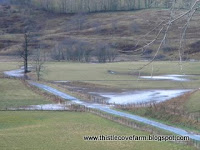 This body of water is formed only when Falling Rock cave is so filled with flood water it can’t keep pace. The result is, the water exits the cave, floods the pastures, spills over the road then goes behind Thistle Cove Farm and onto the next low place. Eventually, after sometimes flooding the road another two or three times, the waters spill to the lowest point and come to rest and the water’s journey comprises some several miles, even as the crow flies. Sometimes the water goes back to the earth in a day or two, sometimes it’s much longer but always, Mother Earth and Father Time have their way with us and we can only grin and bear it. 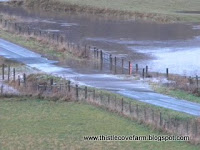 ~ flooded road ~
Earlier the water was almost to the top of the fence posts but is now beginning to recede. Within a few hours, the water was low enough for automobiles to traverse; we’ve seen it so deep, only a tractor could plow through…no pun intended -smile-.
I’ve been feverishly beavering away, getting the house prepared for a company gathering last night. Everyone seemed to have a good time and, thankfully, the house is large enough to accommodate far more than the twenty, or so, folks gathered together. Families were also invited and children ranged from a five week old AAAdorable boy to teenagers. This was the first year it was catered and what a Blessing! I told them they could have their company party here every year as long as they had it catered. 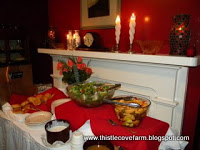 The house still isn’t “finished” but it was close enough. We piled all the “stuff” into the downstairs bedroom, knocked a path through to the bed so it could be used last night and called it quits. The parlor was beautiful with soft candlelight, the dining room was Full of delicious food, the kitchen had cheese platters, nuts and olives and the rest of the house was warm and inviting as well. People seemed to find a place, settled in with their plates and have good chin wags while enjoying the repast. Lovely! 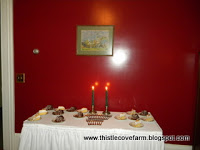 The oil painting was a gift from a local Russian government authority when I taught there in 2004. 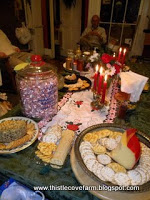 The kitchen had various cheeses and crackers, olives and nuts. The large candy jar filled with soft peppermints is a household staple. There are folks who stop here simply to load up their pockets and then climb back on their tractors and proceed about their work day. 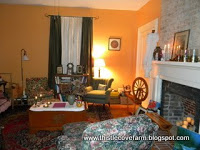 ~ the parlor, almost completed…hurrah! ~
Goodness, I am verbose but it’s been a while since I caught up. There’s one more piece of business…or, as they say in the south…bidness…and I’m finished.
Drum roll, please…….
According to random.org and in the order chosen, folks winning things in the latest giveaway are
Number 14 – Karina wins mug rugs
Number 2 – Becky wins the yarn and knitting book
Number 82 – Ribbonrose wins Gift from the Sea
Number 25 – Paula wins mug rugs
I’ll begin contacting you later tonight but, in the meantime, if you’re reading this and realize you’ve won, please e-mail your snail mail information to me at thistlecovefarms at gmail dot com.
P. S. Paula, I’m unable to contact you because you have yet to release profile information to Blogger. If you want to receive the mug rugs, you’ll have to send your snail mail address to me.
I’ve sent notification e-mails to Karina, Becky and Ribbonrose…please send your address if you’re still interested in receiving the prizes.
Merry Christmas and until next time,