ColoradoLady hosts Vintage Thingies Thursday and this is the second week I’ve remember to play along. Wonders never cease! -smile- 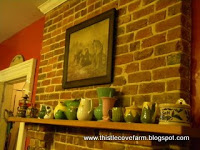 ~ Thistle Cove Farm kitchen mantle ~
We live in an old frame farmhouse, built on the site of the original brick house. The brick house burned Christmas 1899 and in Spring 1900, our home was begun of poplar trees felled on the farm. The farm was much more extensive in acreage then, several thousand acres, and had forests as well as cleared pastures and this house, stables, barns and other outbuildings and storage structures.
In every room there’s a fireplace for heat but not all of them are now working. In the kitchen, we do have a working fireplace outfitted with gas logs. The wormy chestnut mantle is out of another old farmhouse and said to be well over 100 years old.
The mantle has a collection of vessels near and dear to my heart. On the far right, there’s an old salt cellar that Grandmother Bennett used in her kitchen. I believe she received it as a wedding gift in the early 1900’s. My few pieces of Shawnee corn pottery are next and include a mug, sugar dish with lid and a creamer. I adore Shawnee corn pottery; it always makes me smile. The next two pieces, the pink vase and the green vase, are Hall pottery. Next to the green Hall vase is an pretty little unmarked pitcher my Beloved Sistah found at an antique shop.
In the middle of the mantle are three Hall pitchers, a large green and a large yellow as well as the sweetest little green pitcher that’s the exact same as the large green…just smaller.Next to those pitchers is a small Italian pitcher and the green, squatty pitcher is another prize from Grandmother Bennett. Again, I believe it’s a wedding gift when she and Granddaddy were married.
Perhaps I should take a photo of the center of the mantle so you can see things better. Tomorrow, okay? My eyes are really bothering me right now. 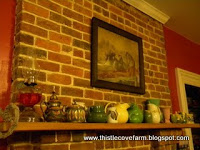 The two pieces between the old Aladdin lamp and Grandmother’s green pitcher are Bedouin made. Dave bargained for them in a small shop in Marrakesh and, when the deal was completed, both Dave and the shop owner were well pleased. I think the shop owner was well pleased because Dave did pay Something for the pieces; the shop owner was adamant food was being taken from the mouths of his children but Dave held firm. As in a lot of world areas, bargaining is both a skill and an art in the Middle East and Dave has always “done himself proud” as they say around here. He’s good at bargaining, some call it haggling, and to watch him in action is a thing of beauty indeed. Well Done!

The Aladdin lamp came from Daddy’s side of the family but I can’t remember where. I do know it’s old, early 1900’s, perhaps late 1800’s, I’m really not sure.

Above the mantle is a copy of the The Gleaners by Jean-Francois Millot. Although the 1857 original is an oil painting, this is a sepia lithograph and the original now hangs in the Musee d’Orsay in Paris. It drew fantastic criticism when first unveiled because it offended the middle and upper classes. Perhaps they didn’t realize even cake comes from flour…? I adore our lithograph and think it’s totally appropriate in our farmhouse kitchen.