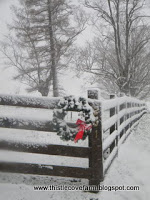 It’s not our first snowfall but it’s the most snow we’ve had this season and it’s beeyouutifull!

If you’re looking for my giveaway in conjunction with Season of Giving by Sew Mama Sew! it’s here; you better HURRY, it’s over tomorrow.

Christina Rossetti, one of my favorite poets, was born on December 5, 1830, wrote a poem that was set to music and has become my favorite Christmas carol, In The Bleak Midwinter. Yes, perhaps it does sound a bit…well…bleak but it’s not. It’s truly one of the most intense pieces of poetry I’ve ever read and it always, but always, speaks to my heart. Celtic Women do it beautifully as does Gloucester Cathedral Choir.

In the bleak midwinter
Frosty wind made moan,
Earth stood hard as iron,
Water like a stone;
Snow had fallen, snow on snow,
Snow on snow,
In the bleak midwinter,
Long ago.
Our God, heaven cannot hold him,
Nor earth sustain;
Heaven and earth shall flee away
When he comes to reign;
In the bleak midwinter
A stable place sufficed
The Lord God incarnate,
Jesus Christ.
Enough for him, whom Cherubim
Worship night and day
A breast full of milk
And a manger full of hay.
Enough for him, whom angels
Fall down before,
The ox and ass and camel
which adore.
Angels and archangels
May have gathered there,
Cherubim and seraphim

Thronged the air;
But his mother only,
In her maiden bliss,
Worshipped the Beloved
With a kiss.
What can I give him,
Poor as I am?
If I were a shepherd
I would bring a lamb,
If I were a wise man
I would do my part,
Yet what I can I give Him —
Give my heart

Hound of Heaven, by Francis Thompson, is the same in intensity; it’s quite strong and vivid. It’s a long poem, some 180 plus lines and begins:

I fled Him, down the nights and down the days;
I fled Him, down the arches of the years;
I fled Him, down the labyrinthine ways
Of my own mind; and in the mist of tears
I hid from Him, and under running laughter.
Up vistaed hopes I sped;
And shot, precipitated,
Adown Titanic glooms of chasmed fears,
From those strong Feet that followed, followed after.
But with unhurrying chase,
And unperturbed pace,
Deliberate speed, majestic instancy,
They beat–and a Voice beat
More instant than the Feet–
“All things betray thee, who betrayest Me.”

It’s a fabulous piece of literature and well worth the read, so, settle yourself down and  go to Hound of Heaven to read in its entirety.

The snowstorm brought us about six inches with a few more expected tonight. I’ve been busy, straightening house, de-cluttering, burning stuff, throwing stuff away, giving stuff away, etc. It’s been great using the burn barrel; the snow keeps the fire from sparking and when one side gets cold, turn around! Plus, the Ranger has been used as a shelter when the cold became too much to bear. 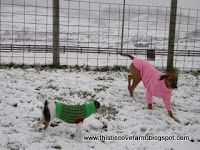 ~ Abigail, in her Christmas sweater, and Sadie, in hot pink ~

Abigail had to be coaxed out of the house; she despises wearing a sweater and gives me the Evil Eye. When I put it on her, she stands there and glares at me then sits down and sulks. Sadie is happy to wear her sweater and doesn’t much care if she looks like a tart; just as long as she’s warm! 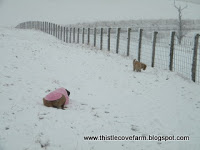 ~ Sadie, crouching in attack position, waiting to pounce on Sam ~
Sadie is a Rhodesian Ridgeback, a breed originating in South Africa and bred to hunt lions, guard the farm and herd cattle. Sadie has a large hunt instinct and is Always Ready to pounce on Sam Spade. He’s always willing to oblige being pounced upon and will return insult for injury or vice versa. Thank God they have never hurt each other too badly; just the odd bruise or nip here and there. 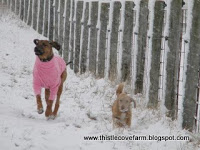 After the pounce, all is joy again and the BFF’s happily continue their march. 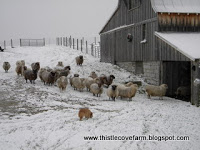 It seems I forgot and left a sheep gate open yesterday and this morning the sheep were in the barn lot. Fortunately, the grass is still good in the barn lot and they weren’t interested in leaving the farm and entering the road. When they saw us coming down the driveway, most of them headed back into the barn and back through the open gate. They knew I’d throw hay to them on the other side of the fence and they were Ready to eat!

Recently, I’ve listed to two preaches who, apparently knowing nothing, or not much, about sheep, didn’t hesitate to give their opinions regarding sheep. Some of the comments include, “dumb, stupid, not a brain in their head, easily led” and you get the picture.

Gentlemen, while I respect you as preachers and men of God, you really should learn something, first hand, about sheep and not rely on what you’ve been told. I can only respond regarding my sheep and my experience with my sheep and if you’d like to come and shepherd for a week or two, consider this your invitation.

Are sheep easily led? Not hardly. They will, however, easily follow IF they deem you worthy and, more importantly, if you have f-o-o-d. Are they stupid? Not really. They know where the good grass is located, remember all the places at which they may drink delicious water AND…the most important point…have trained ME to take care of THEM!

It is, sadly, true they lack a good defense. Unless, of course, you consider a sturdy head butt as not much of anything. Frankly, a sheep can take out a human and do severe damage, including death. At the least, a knee separated from its moorings can do lasting damage and enormous pain. But, on the mountain, a good guard dog is worth his, or her, weight in gold.

I do know those Bible verse about sheep and it’s true we humans are, somewhat, like sheep. We want the easy life, to have hay thrown at us, to eat and sleep at will, to chew our cud while thinking our deep thoughts, to require the world revolve around us as opposed to vice versa. Yes, sheep do act like they believe, “It’s all about US”. How Very Human! So, perhaps that should be, “Sheep are like we humans.” Now, Preacher Man, there’s a topic you could sink your teeth into!