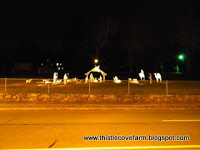 For more than fifty years, every Christmas eve, we’ve read the second chapter of Luke. Mom started this tradition when we were small children and I’ve continued it as an adult. It’s just not Christmas without reading about Luke’s account of the birth of Christ on Christmas eve.

Recently I read someone’s account of the story and she wondered at the “non-essentials” of the story. That just goes to show how different we, all of us, including Christians, are one from another. For me, there are no “non-essentials”, rather bits and pieces of the story not told but just as important, perhaps even more important.

Mary would have been a young girl; a young, pregnant girl not formally married to Joseph. Frankly, I don’t think it was much different then as now. Ah, you know…the sly looks, the glances, the whispers at Mary and, probably and unfortunately, from the church ladies. The men would have been nudging Joseph, giving him “attaboy” pats on the back, proud looks that suggested coupling outside of marriage was something he should be proud of as opposed to something any beast of the field did. But probably not Mary’s menfolk; they would have been angry their sister and daughter was in the family way prior to the wedding vows being spoken. Mary’s mother would have, possibly, been heartbroken.

Are we, any of us, including Christians, any different today?

God forgive me, I am guilty.

These tales would have followed Jesus as he grew into manhood. People have long memories, especially when it comes to “bad news” and there would have still been whispers and sly looks. How did Jesus handle those whispers and looks? Did he become angry or was it then he learned to hold his tongue and bide his time? Was it then He learned how to forgive? How much it cost to forgive?

When Mary delivered her Son, who assisted as mid-wife? Who helped birth the baby? Who caught Jesus when he slipped from the birth canal?  It certainly wasn’t Mary’s mother; the woman who would have been there, holding her daughter’s hand, wiping her brow, whispering words of endearment and encouragement. Was it Joseph? There’s another stigma to overcome during the years ahead. Traditionally, men were kept from the birthing tent or room; that was the work of women alone and considered by the Jewish to be Very Unclean.

I’ve heard during the time of Christ, when poor people traveled, they wore their death shrouds under their robes. If misfortune befell them and they died, their robes would be sold for the money that would help bury them. So, they would be buried in their death shrouds thus preventing the corpse and family  from bearing the shame of a nude burial.

When Jesus was born, Mary wrapped him in swaddling clothes. It’s been said those swaddling clothes was her death shroud, the first portent of the bitter end He came to fulfill some thirty plus years later. The Magi brought gifts of gold, frankincense and myrrh and I’ve always thought Joseph used the gold to provide for his small family when they fled to Egypt to escape Herod’s slaughter of the innocents. The frankincense and myrrh were used for both embalming and burnt as incense in religious worship but, as importantly, used to anoint newborns and infants.

When Mary pondered these things in her heart, do you think she made the associations? Do you think she was weeping as she wrapped her baby, the Christ child, in her death shroud and, now, His swaddling clothes? When the wise men brought their precious, expensive gifts, did Mary wonder at the association between life and death? Did she make that leap? And then, did she make that leap of faith, again, as when she had said, “I am the Lord’s servant,” Mary answered. “May it be to me as you have said.“

Mary, did you know?


1And it came to pass in those days, that there went out a decree from Caesar Augustus that all the world should be taxed.
2(And this taxing was first made when Cyrenius was governor of Syria.)
3And all went to be taxed, every one into his own city.
4And Joseph also went up from Galilee, out of the city of Nazareth, into Judaea, unto the city of David, which is called Bethlehem; (because he was of the house and lineage of David:)
5To be taxed with Mary his espoused wife, being great with child.
6And so it was, that, while they were there, the days were accomplished that she should be delivered.
7And she brought forth her firstborn son, and wrapped him in swaddling clothes, and laid him in a manger; because there was no room for them in the inn.
8And there were in the same country shepherds abiding in the field, keeping watch over their flock by night.
9And, lo, the angel of the Lord came upon them, and the glory of the Lord shone round about them: and they were sore afraid.
10And the angel said unto them, Fear not: for, behold, I bring you good tidings of great joy, which shall be to all people.
11For unto you is born this day in the city of David a Saviour, which is Christ the Lord.
12And this shall be a sign unto you; Ye shall find the babe wrapped in swaddling clothes, lying in a manger.
13And suddenly there was with the angel a multitude of the heavenly host praising God, and saying,
14Glory to God in the highest, and on earth peace, good will toward men.
15And it came to pass, as the angels were gone away from them into heaven, the shepherds said one to another, Let us now go even unto Bethlehem, and see this thing which is come to pass, which the Lord hath made known unto us.
16And they came with haste, and found Mary, and Joseph, and the babe lying in a manger.
17And when they had seen it, they made known abroad the saying which was told them concerning this child.
18And all they that heard it wondered at those things which were told them by the shepherds.
19But Mary kept all these things, and pondered them in her heart.
20And the shepherds returned, glorifying and praising God for all the things that they had heard and seen, as it was told unto them.
21And when eight days were accomplished for the circumcising of the child, his name was called JESUS, which was so named of the angel before he was conceived in the womb.”

Merry Christmas, until next time,