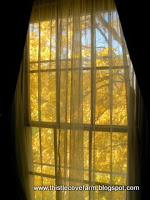 ~ The view from my bedroom window, for a couple of weeks at least ~


Anyone remember that old Emmy Lou Harris song, Quarter Moon in a Ten Cent Town? Great song and singer; she’s got the gift of harmony and I can’t carry a tune in a bucket. It’s just not fair. As to the above photo, it’s what I see, for a couple of weeks, when I look out my bedroom window. Beautiful, eh?

We’re closer to a full moon than a quarter but I really like this photo, below. Besides, it’s cold and rainy outside; I daresay I can even see the moon tonight so this will do. 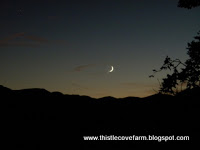 It’s the last evening of October and November is creeping near. The weather is cold, rainy and windy and the front gate is locked along with all the barns, outbuildings and gates. The cats are inside and, at 8:12 p.m., I’m already looking, with great fondness, to my bed. Tonight we lose daylight saving time and I begin the long crawl back to normal, meaning Real Time. Sun Time. God’s Time, the way He intended. I know some folks who love DST, would love to have it year ’round. I’m not one of ’em. I’m fairly flexible on some things but not this. I find it incredulous man would consider he knows better than God. Ole Ben Franklin had some good ideas but DST isn’t one of ’em. Not imo. 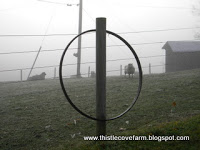 ~ Wagon wheel framing Carly ~
Recently, the days have started foggy and then cleared up. Mostly, the sheep are closer to the house with Carly being the one who always greets me, always wants to know how I’m doing, if I’ve any treats. She’s a rare, primitive breed Shetland who is gentled and domestic with a fondness for humans, at least a fondness for me. She tolerates the dogs because she knows they come with the territory but doesn’t brook any nonsense from them. Carly has two sons, Samuel and Jacob, both are Shetland x Romney and almost as gentle as she. She’s raised them well, has always been a good mother and is now retired. She has nothing more to do than give sheep kisses and watch for me. It’s enough, she’s earned her rest. 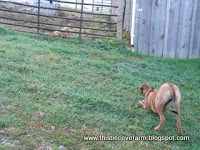 ~ Dog pose for PLAY! ~
Anyone who knows dogs, knows this pose; Sadie wants to PLAY! Sam P. Spade, Secret Agent, on the other side of the gate, caught this glimpse of Sadie and re-thought his position. He loves playing with Sadie but likes it better in the yard; outside the yard, there’s smells to investigate, places to go, things to do. Sam is a dog’s dog; Sadie is still, mostly, puppy; funny that, considering they are about the same age, give or take a week or two.
Abbie and Sam are sniffing wind; Abbie likes to test the wind with her eyes shut and that tickles me. She’s a dog who put her whole being into what she does, a typical terror as Jacks are known around here. Abbie has been living with us for 12 years and she was full grown when she came here to be my heartbeat; she’s earned her grizzled muzzle. Sam is such a dear thing; God sends us to each other, animals and humans, humans and humans. It’s only when we’re open to the experience that we’re ready for each other; until then, we’re wandering in the dark, eyes wide shut and crying piteously about how alone we are in this cold world.
A dog has olfactory senses at about 10,000,000 to our 10,000 and it’s no wonder they are the superior creature when it comes to senses. I listen to and watch my dogs closely; they teach me something everyday. 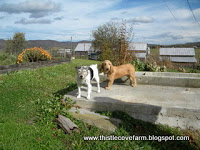 ~ Abbie and Sam P. Spade, Secret Agent ~
Earlier this week, Sadie tried on her new cloak. Ridgebacks have an extremely short coat and when sleeping under blankies, as does Sadie, they have no guard hair coat. I bought this nasty colored XL pink fleece coat on sale and it’s got to have a bit of cutting and sewing to fit better around the legs but Sadie seemed to like it just fine. She wasn’t that crazy about getting it on but after it was on, she loved it. Sadie is seven months old, today…HAPPY BIRTHDAY, SADIE!…and she weighs eighty-one pounds. O dear. We don’t think she’s going to get as large as Shaddie, our first Ridge, because Shaddie weighed 110 at her fighting weight. But. At eighty-one pounds and seven months old, Sadie may well reach Shaddie’s weight and then some. No, she’s not fat; it’s muscle. BTW, pink was not my first color choice but it was on a wonderful sale so pink is what she’s wearing. 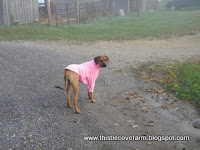 We wanted to run away from home today but my energy level just wasn’t up to it so we stayed home. Dave napped and I tried but couldn’t get my mind to slow down with my body. My old stand-by, reading, didn’t help either so I went to the studio and worked. An Agatha Christie audio book kept me company as the dogs came and went and I was able to finish three fleece throws -Christmas gifts-, prepare a double size fleece quilt for hand quilting -not sure who gets this one-  start another Very Colorful quilt -for me, I think- and almost finish a shopping bag. At Joann Fabric I found half dozen shopping bags “patterns” on sale and that’s how some folks are getting their Christmas gifts…in a hand sewn bag. It’s one that would work well for a few groceries, the library or just to keep in the car to have handy. I think I’ll make and give one away in the One World One Heart event starting Jan 2010. If you’re not aware of the OWOH event, it’s a ton of fun although there are some mean-spirited folks who sign up and then don’t follow through. Tsk. Tsk. I understand life gets in the way of living but, come on…just tell your winner you’ve hit a rough patch and explain the situation. Most of us are understanding of hard times; we’ve all been through them and the game isn’t over yet.

Anyhoo. Sew Mama Sew is hosting their third annual Handmade Holidays. I missed out on the first two and am glad to have found it now even though I’ll have to go to town to download tutorials because we haven’t the bandwidth.A lot of my Christmas gifts are hand made and I love finding new things to make and give away; with November 1 coming at us like a freight train, it’s almost past time to get in gear. What is it? Fewer than sixty days until Christmas? YIKES! Earlier tonight I committed to making my sibling’s step-grandchildren a quilt for Christmas. Thank God there are only two boys each and they both like Spiderman; now to find some Spidey material.

I’m so far behind…I need to send yarn samples to a couple of women and am also going to send them a small goodie just to say “I’m sorry. Life got in the way of living and I’m terribly late.”  Like a lot of folks, I get behind and then beat up on myself because I get further and further behind, all the while, not keeping in touch until I’ve beat myself black and blue with remorse. I hate disappointing people and find, again, like so many folks I pile it on until I’m snowed under. Don’t get me wrong. I say “no” frequently but I also am bad to volunteer myself and then bow and stumble under the weight I’ve made myself carry.

I’ve nattered away another while so time to say good-bye and head to bed. I’m taking aspirin, my drug of choice, so I’ll sleep well, soundly and deeply…or is that all the same thing? I dearly love aspirin and, no, I don’t use it a lot but when I do use it, it’s because I NEED it. God bless the man, or woman, who gave us aspirin!