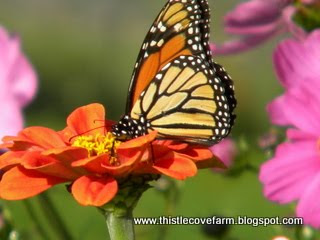 ~ One of the last beautiful sights of Autumn ~

We’ve been home little more than a week and I’m still catching up. I love getting away but I think I love coming home even more, even when there’s a ton of work to be done. We have really good people to farm sit and the basic stuff gets done but that’s all. The gardens, vegetable, flower and herb, have yet to be winter prepared, the porch furniture needs a final cleaning and put away, the tack room and stable needs a thorough cleaning, the de-icer needs to be put into the water tank and the list g-r-o-w-s even as I managed to get some things accomplished. 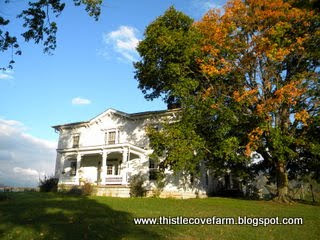 ~ Home, one of the sweetest words in the English language! ~

Then, someone mentioned there are but a few more than sixty days until Christmas. YIKES! Remember Little Black Sambo? I feel like Sambo, making butter, racing ’round that ole tree but not really thinking I’m doing much but I try to get something accomplished in the house, on the farm, in the studio, everyday. Today it was the upstairs hallway; the tri-looms were moved to the farm office and the hallway cleaned, a rug put down, two rocking chairs and table put in place…it’s now ready for a cuppa and a view out the window. That may not sound like much but ya gotta remember…last December the water pipes froze, burst, thawed and we had a major, by my standards, water fall and ruint…as they say ’round here…more than a few wool rugs, some furniture, walls, floors, and other things. We had carpenters working but haven’t seen hide nor hair of them for more than two months. Last week I said, “ENUF!” and moved their tools to the barn; I did leave their huge band saw but that’s only because it’s too heavy for me to lift. The front porch is swept clean and back to what is passes for normal for us.

And, not only the above but we’ve been restoring this ole farmhouse since the day we moved in, fourteen years ago. It was a wreck, had been used to store hay and, please tell me, how many old commodes does one need to keep on the second floor? I mean really! If they were bad enough to be replaced, shouldn’t they have been taken to the dump?  Call me petty but I think I would have trashed them and not kept them which is exactly what we did, post haste, after moving in.

There’s still sheet rock in the front hall and that will stay, along with several rolls of insulation in the farm office building, until mid-November until it can all be picked up.In the meantime, furniture is still piled in the parlor, downstairs bedroom and hallway and there it will stay until mid-November. None of those rooms, plus the dining room, can be used until all the building supplies are removed.

High hopes, I’ve got high hopes…remember that song…it’s my theme song for a good many years now.

I’ve been living, and my house has been, in limbo for almost a year and I’m a trifle tired of it all. Then, I remember to count my blessings and my pettiness fades, yet, yet, yet…I would SO like to have a finished house! Perhaps by Christmas we can at least have our rooms ready to use. Right now, we have five kittens in the unfinished dining room and there they will stay until mid-November until they are weaned. Remember Maddie, one of the “almost drowned” kittens that came to live here in the Spring? Maddie went into season at four months !!! which defies Nature to my way of thinking. It’s simply Not Normal. Early last Wednesday morning, Maddie had five kittens and she herself only five months old.

Trust me. There’s absolutely nothing you can say to me that I’ve not said to myself…I’m still hanging my head in shame. At the barn, we have four yellow kittens from the same Mama Cat that birthed Maddie and Maggie; those kittens are wilder than hares and I’m racing against time to catch them so they can have their shots. At least these “dining room” kittens will be well gentled by the time their eyes are open. One funny thing – when I pick them up and, gently, breath into their faces, some of them will open their wee mouths and hiss at me. Frankly, I don’t blame them but they are going to be gentled; it’s the only way to even have a hope of finding them a home. This is one problem of farm life, having feral cats. To my credit, if I’ve brought a cat here, it’s been gentled; the feral cats are ones that have moved in on me because I feed them. Rarely, but sometimes, I’ve even been able to gentle a feral cat.

The outside of the Ranger was cleaned today – windshield and all windows as well as the bed cleaned of alfalfa.

As to the studio, I opened the door and looked in…does that count? Not really but it was the best I could do today.

Today, we also took the Singer hand crank machine to Mr. H. for service work, that’s a round trip of about 75 miles and a couple of hours. He said it’s at least an 1800 machine but he’s not more definite as his books only go back to 1900. He’s worked on sewing machines for more than sixty years and he’s seen them all and was a bit excited to see my treasure and has promised to give it royal treatment -smile-.

We’ve had a strange October; at times, it’s been Autumn and Indian Summer, at other times, it’s been more like November with cold temps, stinging rain and blowing winds. Today started as a cold, rainy, windy day then morphed into a beautiful, sunny day. We’re expecting snow this weekend so I’ll have to throw down some hay from the loft in order to have plenty for the horses and sheep to eat. All of them are mud fat so aren’t in any danger of starvation but a horse generates heat from the gut out; it’s best for them to have calories. The sheep are all a trifle fleshy but about half the flock is senior and I figure they need the calories as well. I expect to lose a few this winter; I see signs of old age every time the flock moves from one pasture to the next. My mantra has always been, it’s easier to keep them well and healthy than spend the time, energy and money to get them well again.

The puppies are growing like weeds and Sadie is responding, slowly, very slowly, to training. 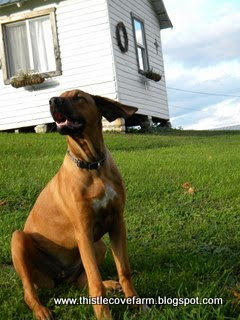 ~ Sadie, catching a scent on the wind ~

Ridgebacks are classified as sight hounds but some doubly class them in the scent category as well. My thought is you’ve got to have “it” in spades in order to hunt lions, guard the farm and herd cattle. 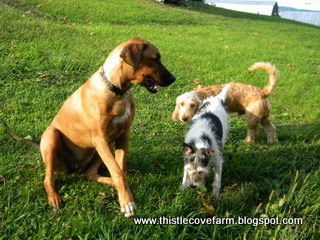 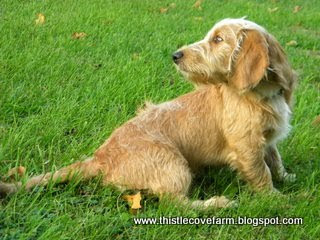 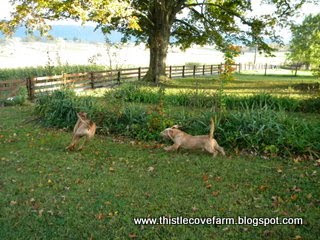 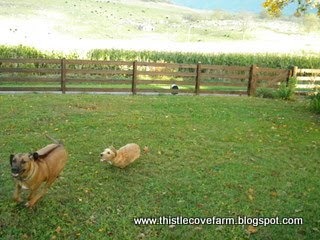 Sadie is such a fabulous companion, as are all the animals, and she loves to come to me, put her front legs in my lap and then twist her head around mine in an embrace. I like to believe she’s giving me a hug and, while I should discourage such behavior, I don’t. I enjoy Sadie hugs and want her to give them to me as long as we’re both able. Sam loves to throw himself into my lap, all excited wiggly, and tell me of his love. This morning, he crawled from the foot of the bed, up my stretched out body, tossed himself beside me and simply snuggled. He gives these huge sighs as he snuggles closer, closer and then drifts off to sleep for a few more minutes before we all come to wakefulness and get up to greet the day. I tell you, there are children who should be so loved and it’s a crime against us as a nation there are children who aren’t. 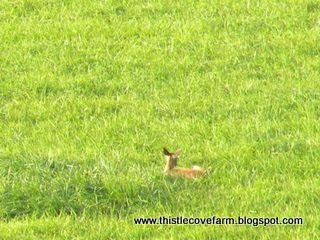 ~ Fawn, at rest in our alfalfa field ~

The fawns are still in the alfalfa field and I live in dread that some stupid person with a gun will kill one or both. I will not call such a stupid person a hunter because a hunter doesn’t kill just for “sport” a baby and then leave the body to rot in the field. If I catch such a stupid person killing one of “my” fawns, it will be all over save the sentencing. Those fawns were born in our field and have never been outside the fence; it’s all they know and we expect their mother was killed sometime in the summer but don’t really know.

Monday morning, on my way to exercise class, I saw these three deer in the middle of town. They had crossed the street and were watching us watch them. As people hurried to their appointments, I stopped to take a photo; I’m almost never in such a hurry I can’t appreciate one of God’s gifts. I’m not so sure the folks in the car behind me held such a belief; what a shame. 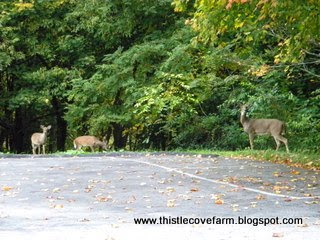 ~ Three deer in middle of town ~

November is election time, in our county, one of the people running for school board office uses his hay bales and fields to advertise himself. 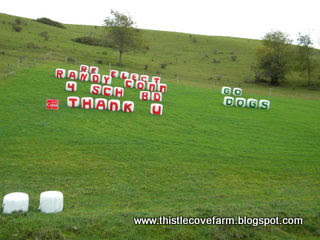 ~ Creative use of wrapped, round hay bales ~

Blessings ~ fawns ~ Autumn ~ lovely weather ~ snow ~ a warm house ~ a snuggly bed ~ puppies ~ kittens ~ a husband who remains, mainly, calm through it all ~ in the midst of life, we LIVE ~