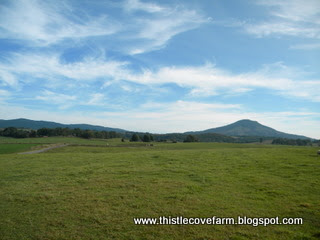 ~ Thistle Cove Farm where it’s beautiful one day and perfect the next! ~ 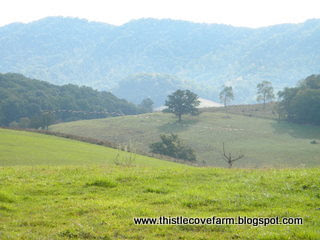 Can you see the line of Canada geese flying right to left? They stretch for most of the picture frame…just incredible! I’ve been so excited this week…the Canada Geese have been spending nights in our upper pasture…can you just see my silly grin?! When they fly in the late afternoon, I stand outside, arm stretched toward them, welcoming them home. They fly so close I can hear the strong whomp, whomp, whomp of their wings, hear their soft voices and, almost, feel their pulse. What an absolute gift! 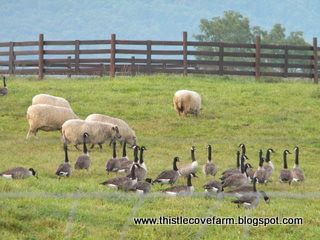 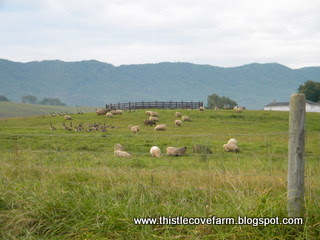 I was late to Zumba and Yoga this morning because I had to take photos. This morning the Canada Geese were waddling amongst the sheep, not a care in the world, sharing breakfast and talking quietly to each other. Neither geese nor sheep seemed frightened but then, I wasn’t all that close. If I had walked any closer, I’m sure they would have gathered themselves and taken to the air. 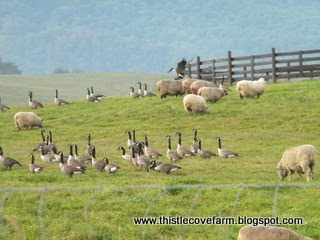 ~ They would waddle first to the left, then to the right ~ 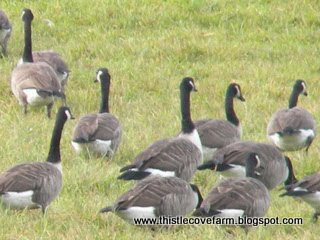 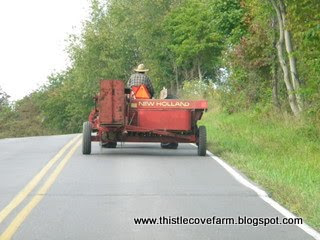 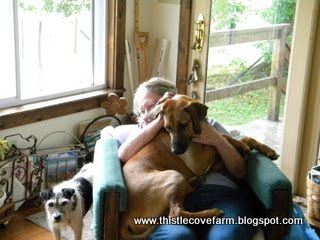 ~Watching Sam watch us ~
Sadie, at five months, is still a puppy in spirit though not in body and loves to climb in my lap for lovin’. Abigail thinks we’re being silly, she’s probably right, but it’s a small thing to bring such JOY into our lives! We’re looking at Sam P. Spade, Secret Agent, who is on the floor, and wondering why he’s been left out of the cuddle. 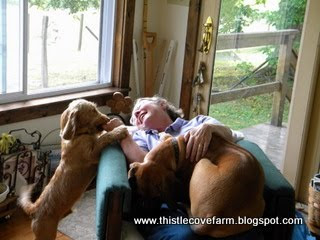 ~ Sam, explaining why the wrong dog is on my lap ~ 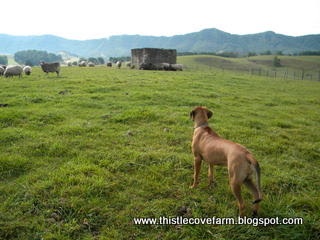 Sadie is a registered Rhodesian Ridgeback and, originally, bred in South Africa to hunt lions, guard the farm and herd cattle. Keniba Kennels is her breeder and they have excellent examples of the breed and breed for conformation and health. They haven’t been breeders quite as long as we’ve had a Ridge but we found them to be quality folks with incredible Ridges and we’re thinking of another Ridge in the spring. Krazy. Yes, I know. But, once you’ve had a Ridge all other dogs are simply canines. Even my beloved Abigail, a Jack Russel Terror, with her huge heart cannot compare to a Ridge. In a word, a well bred Ridge is simply magnificent and Sadie is all that and more! At five months, every fiber in her body screams Champion but we’re not show people. We don’t care about showing, we hate the politics, nor are we interested in breeding; we only want Sadie as a beloved family member. We’ve been blessed with two such Ridges, Shaddie was a Champion and, more than once, protected me and the farm from what could have been a bad situation. Shaddie was willing to attack for me and, eventually, Sadie will do the same. God willing, she’ll never be called upon to do more than stand her ground and protect us but there’s no doubt in my mind, should she be called upon to do more than that, she’ll be ready. 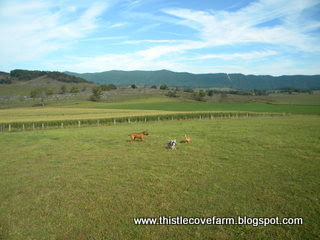 ~ Thistle Cove Farm, a great place to be a dog! ~
I surely hope you don’t tire of my farm photos; I know I never tired of the scenery and it’s just outside my door. Our lives are, pretty much, contained on these few acres. My charity work is such that I can make things on the farm and then give them away either in the community or via mail. I leave the farm for Thursday evening quilting bee, Sunday church and exercise classes; other than that, it’s, mostly, home. Perhaps once or twice a month I’ll make a wild trip to Joann Fabric for sewing supplies or Wal-Mart for groceries or go to the feed store in town for salt minerals for the horses or sheep. Usually, during the year we’ll have a vacation but, thus far, that hasn’t happened this year. Both our families live quite a distance away and the majority of our years were spent elsewhere so we’re not quite as connected in the community as folks who have always lived here. Nor did we have children so were never involved in school activities. My dearest friend lives six hours away and I bemoan we’re not close enough to spend time together even monthly. Still and all, Thistle Cove Farm is the right place at the right time for Dave and I now. And I am ever grateful

Share
Pin
Email
« Living and Dying
Alaska, A Year Ago, Part I »