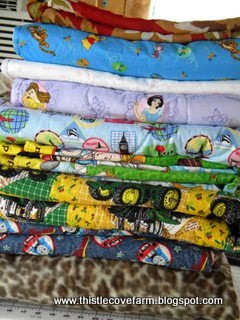 ~ A Stack of Quilts, Fleece Throw and Scarves ~

It’s been mentioned before I’ve begun an exercise program. Some friends asked, “don’t you get enough exercise on the farm?” and the answer to that is, “yeah, but…it’s not aerobic exercise, it’s not continuous exercise and it’s too varied to do much strength building on a continuous basis. So, for the past two months I’ve been doing aerobics, some swimming and yoga and it’s killing me. I figure I’ll be as good looking a corpse as the next older woman standing beside me -smile-. Twice a week I do two hours, one after the other, of Zumba aerobics, then yoga. Once a week I do purely weights for strength building and then yoga to end the week. Why am I telling you this? I’m not really sure except that, right now, I’m sucking air like a guppy because I’ve just finished both classes. I didn’t grow up with exercise, I grew up with work and even though exercise is good for me, I rather bemoan the time taken away from doing “something productive”. To close out this thought…please, give me your thoughts? Encouragement? Support? Words of advice?

Something productive, for the past while has meant quilting. When the computer had to go to the computer doc, I went on a quilting and reading binge. I read a few really interesting books and then some “cozy mysteries” for the shear enjoyment. One non-fiction book was “In the Footsteps of Marco Polo“, the adventure of the two young men who, in the 1990’s, “retraced the same two year Silk Road journey traveled by Marco Polo seven hundred years ago”. I’m envious, of their journey that is, not the young men. Frankly, there were a few times, when reading their book, I was embarrassed by the fact these two men were representing “me” in the form of an American traveler.

Only a few pages into the book, they say something akin to, “…perhaps he was one of those knuckleheads who doesn’t believe in global warming…”. Is it me or does there seem to be a not so thin layer of sheer rudeness in that remark? It used to be gentlemen and gentlewomen could disagree without resorting to rudeness or ill mannered remarks. Not so, anymore. It used to be folks could have differing opinions and what happened was rather interesting and, perhaps, erudite conversation, not the diatribe that some attempt to pass as conversation.

A very few pages later, they announce they were “rolling around, fighting, in the lobby of a hotel because they had a disagreement”. Sheesh, boys: Grow Up.

One other annoyance was toward the last third of the book. They again brag but this time on how well and how liberal the number of curse words they taught a man. Perhaps the man was Tajikistan…I can’t really remember but think it was one of those “stan” countries. BTW, “stan” is generally accepted to be a Farsi , or Persian, word meaning country, nation, land, homeland or place. For example, Afghanistan would mean “homeland of Afghan people”.

My point is…these men were bragging about how well they curse and how well they taught someone else to curse. They might as well have been bragging about being raised by wolves. Wait. I’d find that more interesting. I’m not taking away from their accomplishment and, as mentioned before, am envious. I’ll never have that opportunity as I’m the wrong gender to be traveling in the wilder regions of Muslim countries; even in a chador I wouldn’t be safe.

The PBS program, “In the Footsteps of Marco Polo” has been nominated for an Emmy and that’s fabulous news for those involved. I’ve not seen the program but am eagerly anticipating viewing at some future time. In doing a bit of research, I find those who claim these lads did not travel in Marco Polo’s footsteps and, in fact, totally missed 2,800 miles because they did missed most of Iran and Afghanistan. Harry Rutstein says O’Donnel and Belliveau, the authors, went instead to
Uzbekistan, Tajikistan and Kyrgyzstan where Marco Polo did not visit. Rutstein says he was the first…and apparently only person…to travel the actual route; he also founded the Marco Polo Foundation and wrote of his travels in The Marco Polo Odyssey.

Another excellent book, Wildflower: An Extraordinary Life and Untimely Death in Africa by Mark Seal, “tells the mesmerizing story of the captivating life and shocking death of world-renowned naturalist Joan Root”. If you’ve enjoyed the stories of Dian Fossey, Jane Goodall and even, Karen Blixen, …aka Isak Dinesen… you’d, probably, enjoy “Wildflower”.

So, here’s where I talk about quilting and about time, you say! Perhaps you’ve seen the Deere quilt before but I’ve not seen the person for whom this quilt was made so the quilt is still in the studio. The quilts, fleece throw and scarves were hung on the line and took up all the clothesline, from left to right. Even I was pretty impressed -smile-. Four of the quilts were quilt panels that only needed to be hemmed but those are cute panels. Two are Thomas Train and two are the nursery rhyme, “Hey Diddle Diddle, The Cat and the Fiddle…”. I’ve already given away the third Thomas Train quilt panel and hope the little boy liked it. 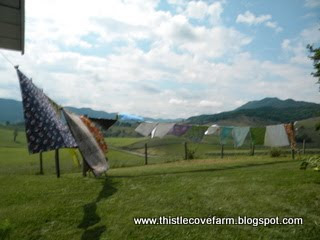 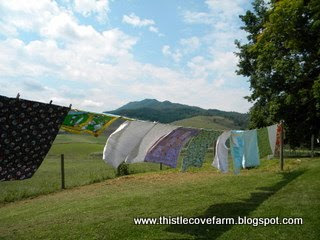 ~ A stiff wind made photographing the quilts more difficult. ~ 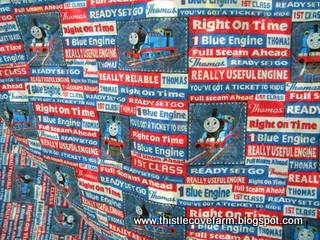 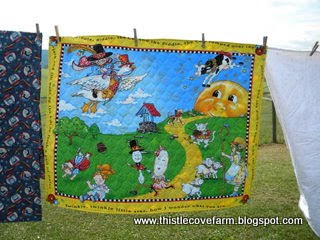 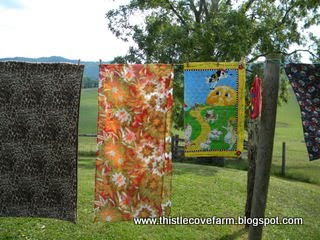 ~ Two scarves, autumnal colors, to be worn as scarves, shawls or throat coverings. ~ 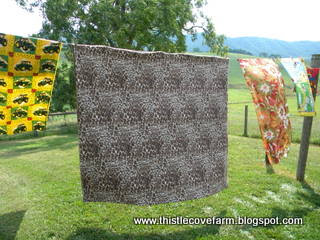 I’m still hand quilting some of these, have about four to finish and will then start on Christmas gifts. I’ve got three of the “little girl” quilts to give away and have to sit down and consider who else has been born; I tend to forget and try to keep a list in the studio. We’ve been having coolish weather and I’ve enjoyed quilting but then, do it all summer long anyway. There are about four months until Christmas and if I don’t make lists, things simply don’t get done. I tend to accomplish a lot more with a list than without.