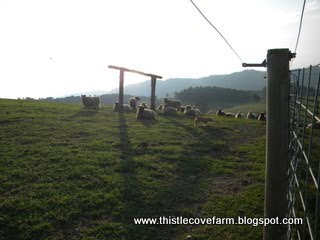 ~ Sam P. Spade, getting bolder as he wanders amongst the sheep ~

Cooler morning weather has arrived, until Indian Summer that is, and puppies are responding by being more energetic than ever. They play like the world is going to end this afternoon, perhaps we should live our lives the same way, eh? Coming home from exercise classes yesterday, I picked up this intact male by the side of the road. As you can see, he’s starved but we’ve given him three meals, water and some bones so he is now a happy camper. He’s part hound and we discussed keeping him but I just can’t take on the added responsibility. Larry N., our Animal Control Specialist, is supposed to retrieve him today and, usually, Larry is able to find homes especially in the northeast where, I’m told, it’s against the law to have an intact male or un-spayed female unless one has a breeder’s license. Hello Big Brother! I don’t believe indiscriminate breeding is a good thing but I think government intrusion into our lives is a Very Bad Thing. I tend to be a Libertarian when it comes to government…the less, the better and, almost, none is best. Frankly, I think politicians should, by law, not accept “campaign contributions”…I’ve heard some call it “bribes” and who is really right or wrong as isn’t this a matter of opinion based upon perspective? If politicians can’t be moral and legal because they are gentlemen and ladies then it should be forced upon them. Just like they force upon us such stupid laws as “you can’t hang an elephant”, a law still on the books in Tennessee. Please don’t think I’m picking on Tennessee as each state has their own share of stupid laws and ejiits in office. 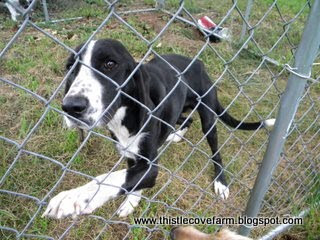 Did you hear about the Nevada Senator who told a newspaper, “I hope you go out of business!” And why, you may very well ask, did a person elected by the people, supposedly serving the people, say such a thing? Because said newspaper dared to call into question the Senator’s politics. Although the Senator is no gentlemen, he is the Senate Majority Leader; God have mercy! Elections are coming up in 2010, perhaps the good people of Nevada will prove to be smarter, Much Smarter, than their elected Senator. Let us hope so. In the meantime, Sherman Frederick has dressed down the Senator, rightfully so, but, like so many in the ‘inner circle’…also known here as ‘inside the beltway’ he appears to believe he’s a law unto himself. Sir, I say to you, “it’s time to exchange your short breeches for big boy trousers and, if you can’t act as a gentleman, then try to act in a manner that reflects well upon the Honorable position of Senate Majority Leader. Please stave off sullying the position. If you want to act like a boor, then please do so in private. Remember the old adage, “it’s best to keep one’s mouth shut and have people think you’re a fool than open it and remove all doubt!” 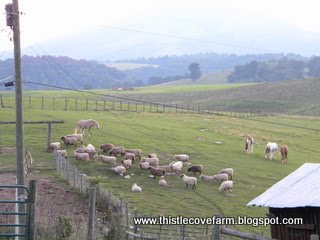 ~ Peaches looks like she’s called a meeting -smile-. ~
The horses and sheep live together in peace…most of the time. The only time things get tense is when the horses get on a rampage and race across the pastures and the sheep scatter like raindrops on a windshield. In all our years of having both, I’ve never had one injure the other; indeed, I’ve never had a farm animal injure another farm animal, no matter the species. I believe this is due to two things with the first being God’s grace and mercy overshadowing Thistle Cove Farm. The second is due to everyone knowing they will be fed and fed well. No one has to worry about ending up on the dinner plate, everyone has a job, no matter folks think it’s silly of me to keep sheep until they die of old age. The sheep give beautiful fleeces and I truly believe, “Happy Sheep Make Beautiful Wool”; even unto old age the sheep fleeces are beautiful, strong and healthy. 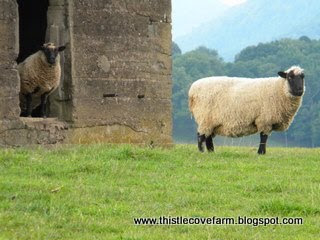 Mama Cat moved her kittens which is an Amazing Feat! She had born them at the bottom of a fifty gallon barrel littered with straw. She waited until they were about four weeks old and then, picking each one up by the scruff of the neck, she jumped to the top of said barrel and then carried them to a new location, again on straw. I don’t know if she moved the straw or if it was already there…another mystery. I am in awe at God’s creation and the abilities He gave them. Mama Cat is a smallish cat and the kittens each weigh about half a pound so to jump that distance, carrying a goodly portion of your own weight in your mouth…defies anything I can do! 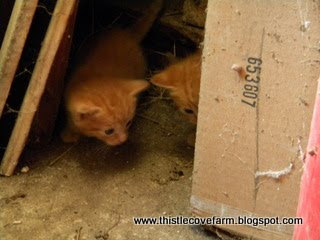 ~ New kittens, moved out of the barrel and onto floor ~

I’d love to keep all four kittens as barn cats and take all but two of the barn cats I now have to the animal shelter. A year or two ago, a woman moved in down the road, stayed a few weeks and moved out. That wasn’t the end of the story however. When she moved in, the story is she brought many, many, Many cats with her as well as dogs and horses. One dog was so wild, his collar was choking him because the dog couldn’t be caught so the collar could be adjusted. I think animal control finally was able to pop it with a tranquilizer, adjusted the collar and then put the dog in a kennel until it could be gentled. Anyway, when the woman moved out, she left the cats; some say upwards of fifty but I don’t really know. I do know some of those cats ended up in my barn, feral as feral can be, diseased with God alone knows what. I’ve been trying to gentle them and have two I can actually get my hands on; the rest are whisps of imagination whenever I’m around. As an aside, the Feral Tribune used to be a newspaper in Split, Croatia which is one country I’d love to visit. I’m afraid I’ll have to not feed the barn cats for a few days…which I hate to do because that means the just as well as the unjust suffer…but it’s, more than likely, the only way I can catch them. I’ll wait until colder weather when they are hungrier and need more calories. I’d rather have them put down humanely than starved to death or die of disease. So, full circle here, that’s why I picked up the stray dog. If he does die at the shelter, he’ll die a much easier death than how he was headed when I found him.

I’m burning daylight, so, until next time ~

Blessings ~ an empty dog kennel ready to be used for strays ~ healthy animals ~ Mama Cat, who takes better care of her kittens than some women do of their babies ~ daylight ~ a kind, ole hound who came along peacefully ~ elections, vote intelligently! ~

Share
Pin
Email
« Awards!
A Stack of Quilts and Books »