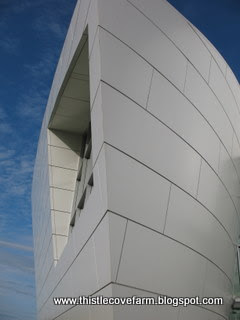 ~ University of Alaska, Museum of the North, Fairbanks, Alaska ~

Soft adventure…we’re too old for any other kind -smile- but we do enjoy taking smallish risks, being on the road, seeing what’s around the next bend, over the next hill. We enjoy meeting people, engaging in conversation on how they live, what they think, what’s important to them. A year ago, Dave and I flew to Fairbanks, Alaska where we spent a couple of days before flying to Barrow. 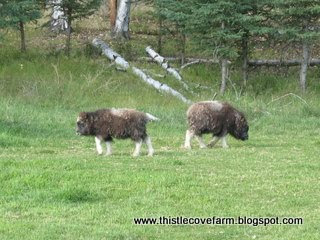 In Fairbanks, we visited the musk oxen program at the University of Alaska, Fairbanks and learned how they are saving these incredible “leftovers” from the dinosaur age. We were unable to visit the Musk Ox Farm in Palmer but the UAF provided us with a lot of information, a warm, hooded sweatshirt I still wear on the farm and some qiviut yarn and a throat wrap. Musk oxen and buffalo amaze and enthrall me; I don’t tire of seeing them in the wild and even enjoy seeing them in captivity. I see a distance past where only God, truly, knows what was going on in this ole world and how He evolved this everything from nothingness into something incredible. He said it and it was so…isn’t that simply awesome?!

The Oominqmak Musk Ox Producers’ Co-operative is owned by around 250 Native Alaskan women who live in remote coastal villages. Qiviut fiber is eight times warmer than wool, more lightweight and is shed naturally in the spring and collected by hand; highly labor intensive. The Native Alaskan women have their own signature patterns, determined by their village and the patterns represent village life and Eskimo culture. Qiviut fiber won’t shrink and is delightfully warm and cozy…as evidenced by me when we traveled further north to Barrow, the northernmost city in all of the USA. 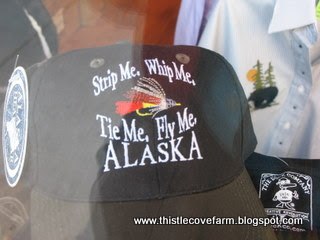 ~ A great cap for anyone who enjoys fishing! ~

Barrow was first known as Ukpeagvik, the “place where snowy owls are hunted.” It was cold and we saw icebergs in the ocean but even the frigid temps didn’t keep me from dipping hands and feet into the water. I guess that makes me a member of the semi-polar bear club.

Fewer than 5,000 folks live in Barrow and some of those aren’t permanent residents. A majority of the residents are Inupiat Eskimo, who speak Inupiaq, and still live by subsistence hunting, fishing and whaling. Almost every residence has sled dogs on a run. Nearby is the Pigniq archaeological site, containing dwelling mounds of a culture some believe from around 500-900 AD. 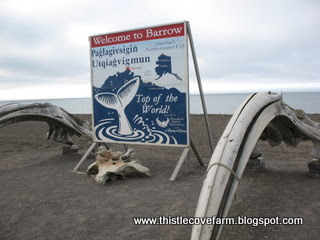 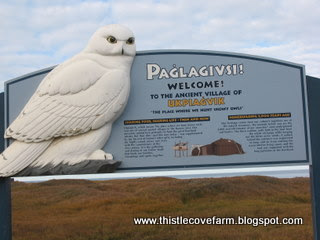 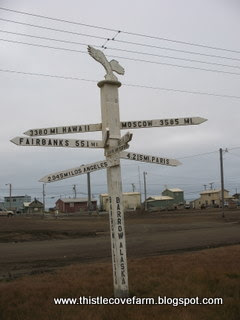 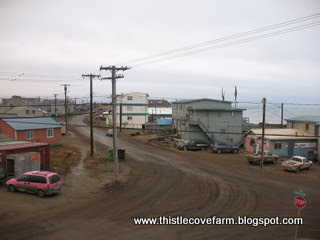 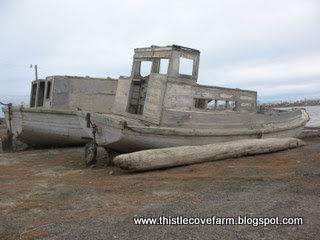 ~These boats are retired, having proved their mettle in the past ~ 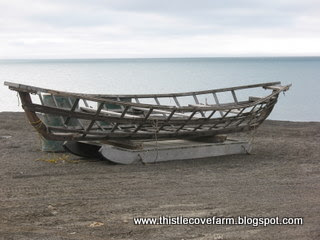 ~ Umiak ~
Umiak is an open Eskimo boat used for whale hunting. When it’s time to hunt whales, the Eskimo’s cover the boat in seal skin which allows it to easily float. 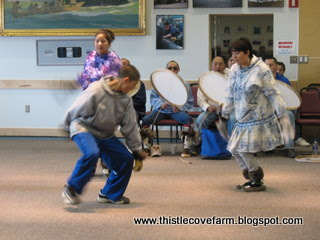 ~ Young Inuits demonstrate traditional dance, music and clothing ~
A large portion of Barrow income derives from tourism and we were fortunate to have these young adults and children demonstrate native dances and music. So much of their dance revolves around the hunt; understandable as “food, shelter, clothing” meant life in its most basic form. 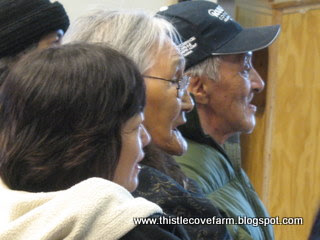 ~ This proud family sang along as they watched their young perform ~ 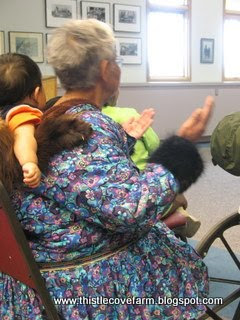 ~ Grandmother reliving days past as she participates from the audience ~ 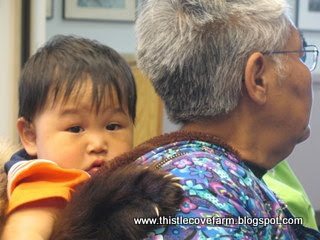 While we only spent two days in Barrow, those two days were packed with activity. Below, whale bones form an arch where someone keeps their umiaks and other fishing materials. 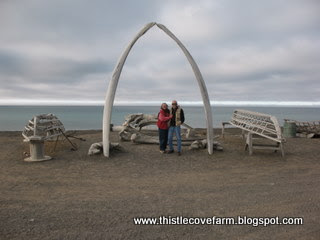 ~ Dave and I, standing beneath the whale bone arch ~ 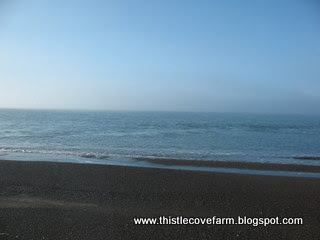 This is the northernmost point one can go in the USA and is north of Barrow. If you look closely, you can see the line where the two bodies of water meet. There’s nothing here but ocean, sea, beach, icebergs, sea gulls and polar bears. We didn’t see a polar bear and that’s okay with me; polar bears are totally unsafe because they have No Fear. Of anything. Each other, other animals, humans…nothing! It made for interesting foot travel as we walked around Barrow and we were told to Always Be Aware of our surroundings. A polar bear had been seen in Barrow the day before and we were told to give them wide berth…for good reason.

The Arctic Ocean, pretty much, lies above the Arctic Circle, 66.5 degrees N, and is almost entirely surround by land. The Arctic Circle is the southern point at which the sun does not rise on the winter solstice nor set on the summer solstice. The central part of the Arctic Ocean is permanently covered in about ten feet of ice and we saw icebergs being batted between the Arctic Ocean and Bering Sea. The Bering Sea is one of the largest ecosystems in the world and home to huge mammal and bird populations as well as marine life. 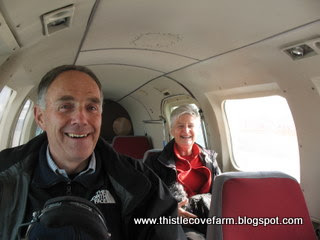 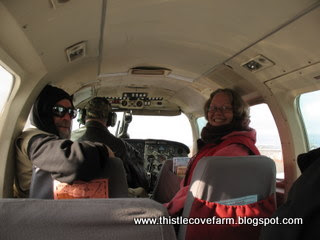 ~ In a eight-seater Cesna, headed for Deadhorse, Alaska ~

Our bush pilot got the most out of a tank of petrol. As we were flying over the tundra, the gas gauge, disturbingly, kept showing a lower and lower supply of petrol. Eventually, the pilot, very casually, reached over and flipped a switch to his second tank. WHEW! Thank God for extra tanks and bush pilots who are absolute pros and don’t want to crash any more than do we.

Tundra is the world’s youngest biome and is calculated at only 10,000 years old. Now, I’m one of those people who don’t have any problem with someone saying, “the earth was formed 50 million years ago” or “tundra is the world’s youngest biome at only 10,000 years old”. I figure God has made things as He sees fit and one day, beyond the veil, all will be revealed. Heck, I don’t understand grass and don’t expect to until the other side of death!

The Finnish word “tunturia” means a barren land and that’s where we get the word tundra. The ground is permanently frozen from ten inches to three feet, or thereabouts, and no trees grow. In winter, it’s frozen, cold and dark and in summer it’s soggy, light and covered with marshes, lakes, bodies of water and attracts birds, insects…lots and lots and lots and lots of insects…and provides food or food sources for moose, musk ox, arctic fox and other wildlife.

We flew out of Barrow, headed for Prudhoe Bay where we would spend a couple of nights at a Deadhorse oil workers camp. We spent quite some time in Alaska so the Alaska trip posts will be spread out over a week or three; hopefully, you’ll enjoy.